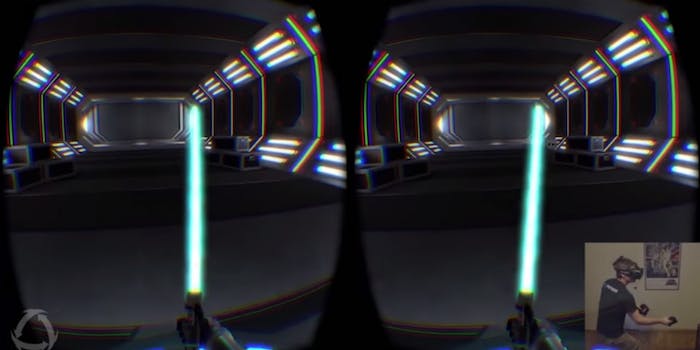 Get your Luke Skywalker on with this virtual reality lightsaber sim

Kinect Star Wars was rubbish as a lightsaber simulator. Virtual reality rigs, however, might be up to the task.

This lightsaber practice is pretty much what Luke Skywalker did with Obi-Wan Kenobi in the Millenium Falcon on the way to Alderaan. Minus the blast shield over his head, of course.

The STEM system uses five devices to track arm, leg, and head movement, by way of addressing the fundamental problem behind virtual reality gaming, or how players are meant to control the game.

Virtual reality games so far work best when head movement is divorced from the way players move their avatars. The Oculus Rift is great for driving or 3D space combat games, for example. Looking over your shoulder while driving on a race track, or to see whether an enemy starfighter has dropped into your six o’clock position, is perfectly natural movement.

It also has nothing to do with controlling the way your car or starfighter is moving on the track or in space. Your hands are on a steering wheel and feet are on foot pedals, or a HOTAS (hands-off throttle and stick) setup. You can move your head anywhere you want without changing the way you move in virtual space.

First person shooters, on the other hand, are so far pretty unsatisfying VR experiences, because movement is unnatural. Do you necessarily move your head in the direction you want to walk? Do you control which object you point at primarily with your head, or are your hands controlling the direction of the gesture?

The STEM system might solve these issues through independently tracking all four of the users limbs and their head, but then the questions are whether or not you feel like strapping all of this gear to yourself in order to play a video game, and whether you want to pay for a STEM system and an Oculus Rift.

Judging from another STEM demo on YouTube, which looks like it at least makes weapon handling in VR a satisfactory experience, the hardest core of the hardcore PC gamers just might be willing to fork over the cash.