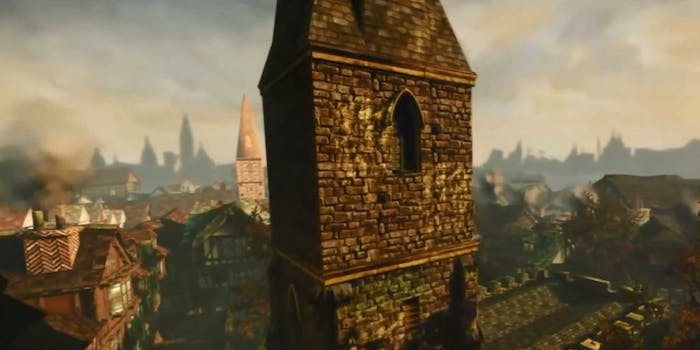 It's about as gritty as you'd hope.

The British Library, in collaboration with annual videogame festival GameCity and software company Crytek, launched the “Off The Map” competition in January, which “challenged videogame design students to turn historic maps and engravings from the British Library collections into a 3D environment using Crytek’s CRYENGINE software.” Not long ago, the winners were announced: six second-year students from De Montfort University, Leicester, who produced a stunning recreation of London as it looked before the Great Fire of 1666.

Contestants could elect to depict Stonehenge, the Pyramids at Giza, or the Tower of London. The De Montfort students went with the Tower, which is magnificently rendered in the flythrough YouTube clip below, but expanded their boundaries to include shops and stalls, sooty back alleys and wharves, gallows and church cemeteries, London Bridge and Pudding Lane, where the fire originated. Even the sunlight has an aspect of historical grime to it.

“Some of these vistas would not look at all out of place as special effects in a Hollywood studio production,” said Tom Harper of the British Library’s Map department. Many of the buildings themselves are the work of conjecture, as Londonist points out, but thanks to period street plans and engravings, much of the detail is realistic. The group “even included the hanging signs of genuine inns and businesses,” based on mentions found in diaries of the day.

So what sort of RPG do we envision here? One gets the feeling this would make a killer setting for the next installment of Grand Theft Auto. Or Grand Theft Carriage. You know what I mean.