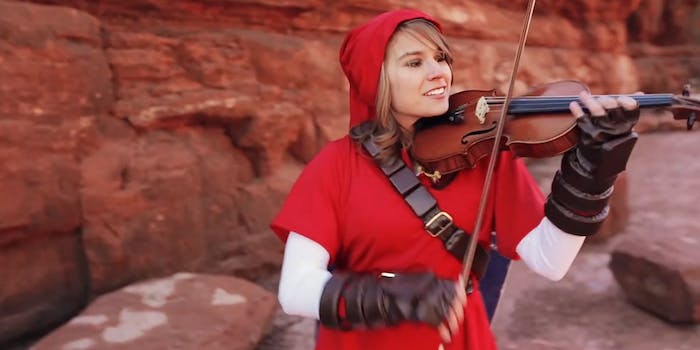 Taylor Davis's passion for video game music has taken her on an increible journey.

Taylor Davis grew up a video game junkie, who loved the music of her favorite games as much as the adventures themselves. She was so enthralled by the soundtracks that she learned them by ear and played them solo on her violin, or with her high school quartet.

The music brought her joy, but also pain. Her love of games got her labeled as a “loser” at her school and she was disregarded as an outcast. Fortunately, Davis didn’t let the bullying crush her passion. It stayed with her until, years later, she took her music to a public stage on her own YouTube channel.

“When I first started posting I was really just trying to find a casual way to keep music a part of my life since I had graduated from college and didn’t have any plans to pursue music as a career,” Davis told the Daily Dot.

In just a few years, her hobby became a hugely popular channel, where videos reach millions of fans. By combining her impressive violin skills with her love of video games, Davis stands out among the other musicians on YouTube.

Davis said that for as long as she can remember she’s been a gamer—some of her earliest memories are from playing Intellivision. One day she decided to try playing a song from Final Fantasy VII and got hooked. The game had a huge impact on her life and in many ways it’s still her “favorite game of all time in terms of story, music, and gameplay.”

“I started just messing around playing some of my favorite themes from that game by ear on my violin, and then I discovered I could purchase the OST from Japan on eBay, so I bought the soundtrack and would play along with my favorite songs,” she said.

While Davis continued to play video game music for enjoyment, when it came to performing she only played classical music with an orchestra or as a soloist.

“I love classical music, but I don’t have a passion for it, and I don’t feel nearly the same emotional connection to classical music as I do to video game and film music,” Davis explained.

“I really like to cover anything that has had some sort of lasting impact on me, whether it was from a video game or film, so a lot of the time nostalgia really has a lot to do with what I choose to cover,” she said. “I choose songs that make me feel something emotionally, whether it’s epic, adventurous, beautiful, calm, etc., it just has to resonate with me in some meaningful way so I can reflect that in my playing.”

Her emotional connection to the music is clear in each of her videos. They range in quality from simple recordings she’s done herself to professional recordings in beautiful locations with graphics and even cosplay. Davis will spend several days on a video she records herself, from making the arrangement to filming and editing. The professional recordings take even more time, particularly because of the level of production and the costumes she wears. In many of the videos, her stunning cosplay stands out even more than the gorgeous scenery.

“Usually if I’m doing a professional video like ‘Gerudo Valley’ and Journey, it just makes sense to either full out cosplay if it’s available or to at least try and do something in the general style of the game [or] film,” she said. “I’ve found that, especially with the video game covers, that my audience really has a lot of fun with the fact that I’m cosplaying, so it makes me happy when my audience is really enjoying what I post!”

Davis believes the visuals add enough to the production that it makes people want to re-watch and share with friends. The effort she put into her Journey medley didn’t just do well with her fans, it also caught the attention of the game’s composer Austin Wintory. The two became friends and eventually Davis was presented with an amazing opportunity.

While working on the score for Kickstarter-funded game The Banner Saga, Wintory asked her to be the solo violinist on the soundtrack. Davis jumped at the chance. She called her first performance on a video game soundtrack “an amazing experience” and “a dream come true.” She would love to do it again.

“Since I’m such a huge gamer myself and know the kind of impact the music can have on a gamer, it’s so exciting that my performance on the soundtrack is actually a part of the gaming experience and that it might really touch someone in a positive way,” she said.

While working on the soundtrack, Davis had the chance to perform with fellow YouTube musician and gamer Malukah. The two recorded a medley of music from The Banner Saga which they then shared with their fans. Davis has also performed with Lara de Wit, who covers game music on violin and piano.

“I really love working with other YouTube musicians on collaborations and both Malukah and Lara are wonderful women personally and professionally!” Davis said. “It’s kind of silly to say, but I’m so grateful for the Internet because it makes it possible for musicians like us to live in completely different parts of the world but still work together to create and share the music that we love. It’s really incredible!”

While Davis started her YouTube channel because she didn’t think she’d be able to make music her career, it actually had the opposite effect. Thanks to people purchasing her albums and helping her through sites like Patreon, two years ago she was able to quit her day job to become a full-time musician. Now, in addition to her channel and live performances, she’s part of a video game rock band led by Blizzard Entertainment composer Jason Hayes called Critical Hit.

“It’s kind of hard to believe that the very thing I used to get bullied for back when I was younger is now something that so many different people from all over the world share a love in with me and now I receive support for it in an overwhelmingly positive way,” Davis said. “I’m living proof that if you just follow what you’re passionate about in life and ignore the negative people who try and bring you down, you can create something really meaningful for yourself and others to enjoy.”