The Internet is obsessed with a show about Viking threesomes

Norse mythology, threesomes, and glorious battle—what could be better?

With a dynamite premise like that, it’s no surprise that Vikings became super popular within seconds of its first episode airing last year. It basically typifies the History Channel ethos of being kind of educational, but ending up as slightly trashy yet super addictive entertainment TV.

The four main components of Vikings are:

1) Muddy battle scenes where the frame rate is slowed down so much that it’s like watching a slideshow of hunky Nordic men grappling with each other.

2) Random detours into an undergraduate lecture on Norse mythology.

4) A three-way marriage between two hot, muscular Vikings and their Christian slave.

We’ll give you one guess as to which of these points inspired Vikings’ Tumblr fandom. 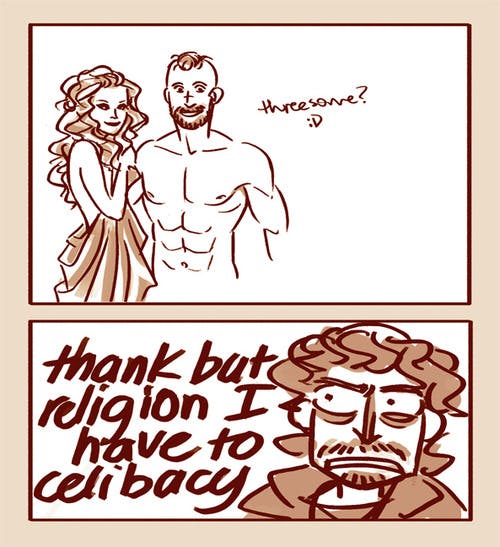 We hope you like threesomes, because that’s what you’re getting

If you’re assuming that the above cartoon is an exaggeration of what happens on the show, think again. One of the main storylines of season one is Ragnar raiding a monastery and bringing back Athelstan, a British monk, to be the house servant to his family. (Lagertha, Ragnar’s wife, is far more interested in swordfights and helping to rule the town than in sitting around indoors all day.)

In Vikings fandom, the main OTP (“One True Pairing”) for fanfic and fanart is more like an OT3, and everyone is heavily invested in Lagertha, Athelstan, and Ragnar living happily ever after—something that is definitely never going to happen, sorry. The show’s second season already looks like it’s dangerously close to torpedoing this relationship entirely, which means that a whole bunch of viewers are likely to jump ship and concentrate on the less traumatizing world of fanfic instead. Vikings screenwriters, beware.

The Vikings cast is willing to play along

Those two are the actors who play Ragnar and Athelstan, by the way.

Travis Fimmel (Ragnar) is a former underwear model. Allegedly, some of his old Calvin Klein billboards had to be withdrawn after too many female drivers crashed their cars while looking at them, although Fimmel insists this is just a rumor. Either way, this means that he can combine A+ abs with the acting chops required to play a dude whose charisma and strategic badassery allowed him to lead massive Viking raids across England and France. In terms of the intersection between quality and gratuitous male shirtlessness, Vikings rates somewhere between Teen Wolf and Game of Thrones.

Lagertha, played by Katheryn Winnick, is arguably the audience’s favorite character. Winnick is one of Vikings’ genuine real-life warriors, having earned her first black belt at age 13, and opened her first martial arts school by 16. She’s also the one to follow on Twitter, if not just because she must have an incredible agent: Her life seems to be a constant stream of fashion magazine interviews and rubbing elbows with A-listers at Hollywood parties. (Apparently Samuel L. Jackson is a fan.)

Wearing a house around my neck. Please stay on! Gorgeous piece from @Bulgariofficial pic.twitter.com/o0Vp14tfkE

The third member of Vikings’ central trio is George Blagden, the show’s original link to Internet fandom. Before playing Athelstan, Blagden’s most famous role was that of Grantaire in the recent Les Misérables movie. To normal viewers, Grantaire was a near-invisible background character with only about three solo lines onscreen, but to anyone watching from the perspective of Tumblr fandom, he was one of the most important people in the entire movie.

In Les Mis fandom, the subtextual relationship between the cynical Grantaire and idealistic revolutionary leader Enjolras is the most important aspect of the book and film, racking up over 4600 fanfics on Ao3, and unknown numbers of obsessive Tumblr fan pages. George Blagden, at this point only 23-years-old and suddenly famous among an extremely niche market of fans, was happy to embrace the Grantaire/Enjolras shipping situation, even singing a tribute song on YouTube.

This all left him very well prepared to star in a fandom-popular TV show like Vikings, a job that involves having fans who make zillions of GIFs of him being led around in a collar and leash by Travis Fimmel. To be honest, he’s dealing with it with aplomb.

It’s pretty common in historical dramas for women to be sidelined into supposedly “traditional” roles. Happily, Vikings ranks somewhere close to Spartacus: Blood and Sand in that no one is “just” a wife or mother. The Lothbrok household is founded on a marriage between equals, with Athelstan essentially taking the role of nanny and housekeeper so Lagertha can go on raids with Ragnar or rule the town while he’s away. In season one, Ragnar and Lagertha have a healthier and more balanced relationship than many 21st-century couples, although recent episodes indicate that Ragnar has seriously screwed things up in that regard. 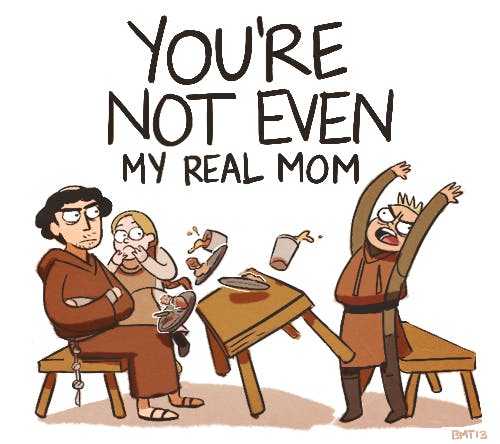 The writers of Vikings took Lagertha’s semi-mythological role of “shieldmaiden” and ran with it, but that doesn’t mean the women of Vikings are all either silent girlfriends or Xena: Warrior Princess types. Although the show is essentially male-dominated, every one of the female characters is well-written and far from idealised, and several episodes take a serious look at the differences between male and female roles in Viking society.

One of the primary antagonists in the first season is Siggy, the wife of the villainous Earl Haraldson. Her role is something like a cross between Lady Macbeth and a Real Housewife of 8th Century Scandinavia, and she spends a lot of time swanning around in the Viking equivalent of Chanel. However, she is never portrayed as being inferior to the tougher and more warlike Lagertha, just that her values as a noblewoman are different from someone who grew up on a farm. As such, Vikings is one of the few historical dramas that the decidedly feminist audiences of Tumblr fandom can watch without having to ignore glaring problems with gender roles and female characterisation. 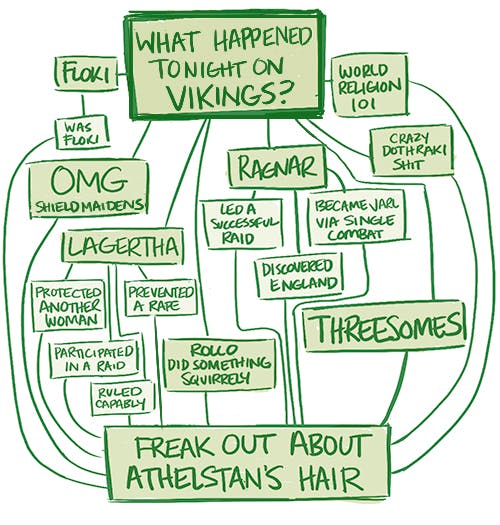 OK, so you’ve probably gathered by now that watching Vikings isn’t going to earn you a degree in Norse history. From an academic point of view, the show is basically nonsense with occasional forays into well-known myths and weirdly detailed Wikipedia monologues, such as an in-depth explanation of Viking longship engineering. Luckily, this doesn’t seem to bother most viewers.

It helps that Ragnar Lothbrok himself is essentially a fanfic character. He’s a popular figure in Norse sagas and history, but his various exploits are likely to be a combination of several other Viking heroes including real-life Scandinavian kings, with some mythological stuff thrown in for good measure. The ongoing legend of Ragnar Lothbrok is more like a popular folk tale than anything else, with his last popular depiction being a 1958 Hollywood movie starring Kirk Douglas and Tony Curtis, and narrated by Orson Welles.

The historical basis for Ragnar Lothbrok and company is shaky enough that Norse history nerds aren’t likely to be offended if something seems “wrong.” Instead, they concentrate on the more general historical details of the show, resulting in a thriving community of people who love Vikings… and love to pick it apart at the seams. 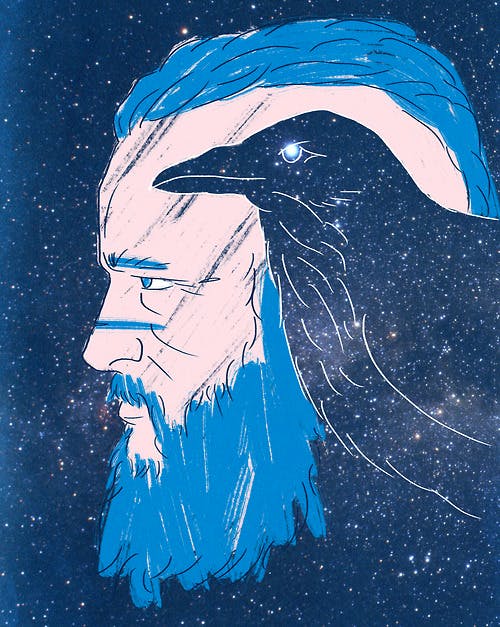 The reason why Vikings has remained so popular among genuine fans of Norse mythology and culture is that while the show’s historical background is only slightly more fact-based than other History Channel staples like Ancient Aliens and UFO Files, it’s accurate in spirit.

Ragnar is a true Viking leader: brutal, egotistical, and usually uninterested in peaceful alternatives to hacking people apart with an axe. His main goals are conquering places and stealing gold, desires that don’t really make as much sense to modern audiences as protecting your family and town (Lagertha) and trying to survive being thrust into a new culture (Athelstan). In the end, what we have here is a show that feels accurate without actually being accurate, which is really the best of both worlds. 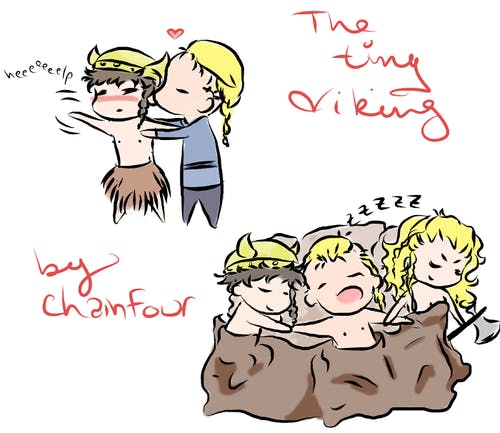