Parents, hide your children. The adorable Link from The Legend of Zelda officially has to share a stage with the gun-toting homicidal maniac from Grand Theft Auto III.

The Strong National Museum of Play in Rochester, New York, has announced its 2016 inductees for the World Video Game Hall of Fame, and the inductees span the scope of video game history, chart the birth of genres, and mark the founding of legends. Among the celebrated titles entering the Hall of Fame this year are Grand Theft Auto III, The Legend of Zelda, The Oregon Trail, and The Sims.

Grand Theft Auto III may have been the third GTA game, but it was the first GTA title that popped out of the 2D worlds that had previously defined the series. GTA I and II were like prototypes for the monster franchise that Grand Theft Auto would become following the release of GTA III for the PlayStation 2 console in 2001.

GTA III‘s game design still informs our understanding of what an open-world game ought to be: a healthy mix of narrative-driven missions, side missions that offer a wide variety of different activities, and entirely free map exploration coupled with the ability to cause trouble.

Grand Theft Auto III also transformed GTA into the default target for conservative cultural critics whenever their sights turned to video games—though this criticism may have only increased the series’ popularity. Grand Theft Auto V, released in 2013, was the fastest-selling entertainment product in history.

The Legend of Zelda, released in 1986 for the original Nintendo Entertainment System, not only heralded the creation of Link, one of Nintendo‘s most popular icons (second only to Mario), but also provided the best early demonstration of what the NES was capable of. It also presaged the console’s rise to dominance in the third generation of video-game hardware.

Famously inspired by the childhood adventures of acclaimed game developer Shigeru Miyamoto, The Legend of Zelda required players to be deft with an NES controller as Link battled monsters; to be creative in their thinking as they helped Link solve puzzles; and to embrace the spirit of exploration as they helped Link discover the locations of nine labyrinths—and the pieces of the legendary Triforce that lay within them.

Sequels to The Legend of Zelda have served as flagship releases for almost every new Nintendo game console since the NES. Zelda releases are such potent drivers of console adoption for Nintendo that the company has yet to release a Zelda game for the Wii U, instead choosing to hold back the next Zelda game until it is ready to debut its next-gen NX console.

The Oregon Trail is still heralded as the champion of learning games, software that demonstrated that it’s possible to entertain and educate a player simultaneously.

Originally designed in 1971 by three student teachers at Minnesota’s Carleton College who wanted to teach students about pioneers’ 19th-century journeys, The Oregon Trail grew from a simple educational tool into a game that is still being published today on modern platforms like smartphones and tablets.

It took decades for mainstream critics to see video games as anything other than frivolous entertainment, which makes the early success of The Oregon Trail all the more impressive. 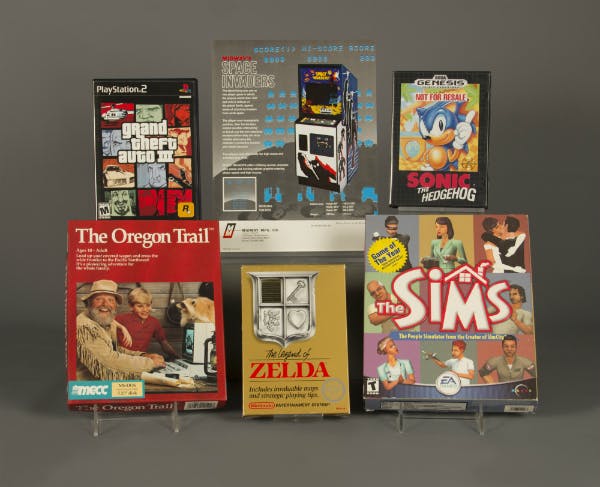 The 2016 inductees into the World Video Game Hall of Fame

The Strong National Museum of Play

The Sims, released in 2000, asked the question, “What do the lives of the people who live in the SimCity games look like?” Game development legend Will Wright, the creator of the SimCity series, also designed The Sims. Wright thus gave players the ability to shape what was essentially the same game world from its very top to its very bottom.

The Sims was a suburban life simulator with no overt goal other than to allow players to build environments for their Sim characters and see what happened. Players could build and decorate homes; set up daily routines for their Sims, like when they ate, slept, exercised, and socialized; and watch how their semi-autonomous creations reacted to the changes.

It wasn’t all fun and games, though. If players weren’t careful, their Sims could die from starvation or household accidents. Players found their Sims’ adventures so compelling that three numbered sequels and dozens of expansions for The Sims franchise have been released since 2000.

Sonic the Hedgehog, a platforming game released in 1991 for the Sega Genesis, was to Sega what Super Mario Bros. was to Nintendo, a showpiece game for Sega’s console hardware and the mascot for Sega’s overall console-game business.

Where Super Mario Bros. was defined by precision jumping, Sonic the Hedgehog stressed pure speed. Players needed quick reflexes to avoid leading Sonic to disaster as he shot through levels like a bullet, picking up golden rings while dodging enemies, spike traps, and pits.

While Sega eventually dropped out of the hardware business, Sonic the Hedgehog continues to be a mascot for Sega and its video game empire, with the latest Sonic game hitting iOS devices in 2015.

Space Invaders, released in 1978, may not have been the first arcade cabinet, but it arguably became the icon for early arcade culture. The pixel aliens that marched up and down the screen and dropped bombs on the player’s laser cannon are still popular icons in game culture, worn on clothing like badges of membership for old-school gamers.

The rise of Space Invaders gave birth to an arcade-game genre full of spiritual successors like Galaxian, Galaga, Phoenix, and Satan’s Hollow. Space Invaders was also the unofficial flagship game for the Atari 2600 console. It translated so well into a home version that Space Invaders, more than any other game, may be responsible for demonstrating how gamers could replicate in their own living rooms the same kind of fun they had in arcades.

The Strong National Museum of Play weighs icon status, longevity, geographical reach, and influence when deciding which games are inducted into the Hall of Fame from the list of nominees. Nominations for the Hall of Fame Class of 2017 are already open.