Microsoft, Sony, and Nintendo should be paying attention.

If you’re trying to select the right game console as a gift, or trying to convince friends to upgrade to one of the new consoles, Nielsen Games has some data that might help.

The video game arm of media-research firm Nielsen has released a study of console preferences based on data from the 2014 holiday sales rush. The numbers measure seventh-generation console ownership and help explain why people chose certain eighth-generation consoles. 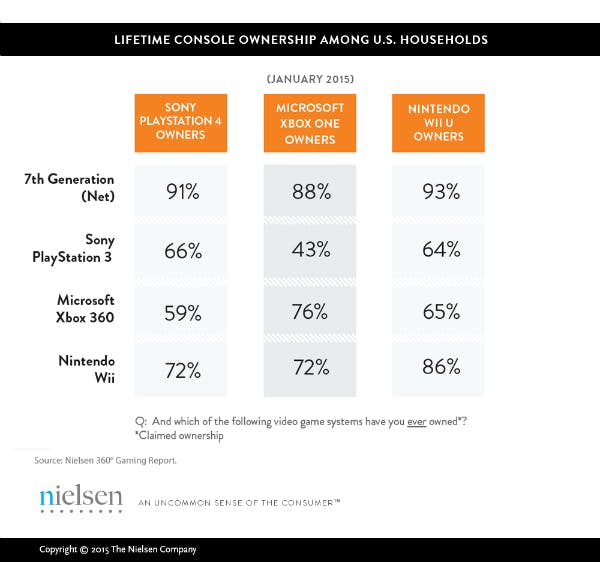 Gamers also told Nielsen why they had chosen a particular eighth-generation console, and their feedback fits well-known differences between the devices. The PlayStation 4 produces sharper, better graphics than the Xbox One; PS4 players cited “Better resolution” as their number one reason for buying a PS4.

Up until the current generation, Xbox consoles have had clearly superior social tools than PlayStation consoles. Xbox social networks are often anecdotally cited as a motivation for switching from the Xbox 360 to the Xbox One. “Brand loyalty” is a fair substitution for “that’s where my friends are.”

Nintendo, meanwhile, prioritizes good, clean, family-friendly fun over any other factor in both its hardware and software. Accordingly, “fun-factor” was the top reason for buying a Wii U console. 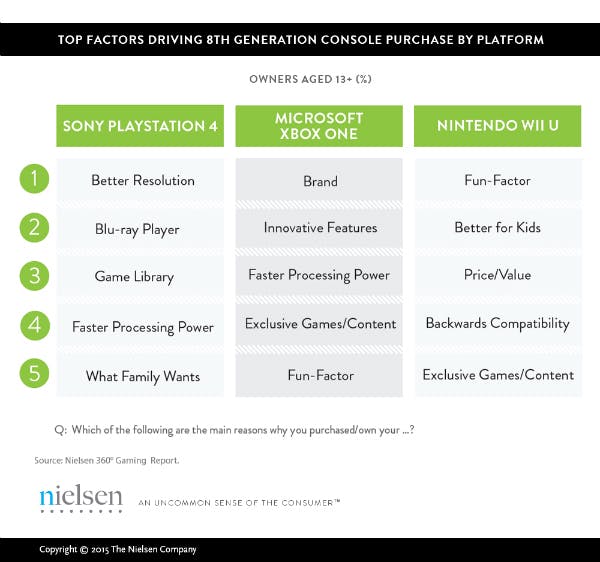 Microsoft, Nintendo, and Sony are reaching and attracting their intended audiences. What will be more interesting to see is how things stand five years from now, when the Xbox One may have gone through the same sort of appreciable evolution as the Xbox 360 did, and when Sony’s virtual reality initiatives may have paid off. In five years, Nintendo may even have released a ninth-generation console.