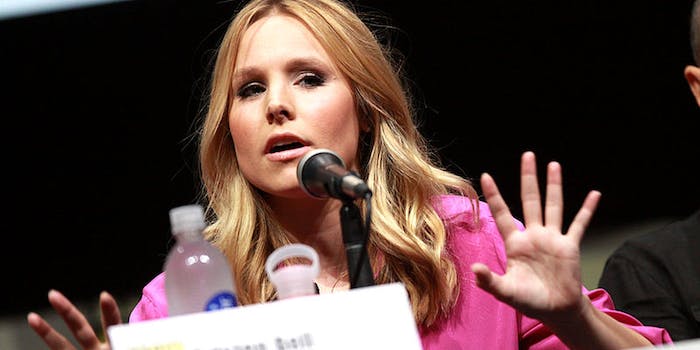 Why other cult shows might struggle to replicate ‘Veronica Mars’ success

It turns out Marshmallows may be in a category all their own.

Last weekend finally saw the much-anticipated release of the Internet-funded Veronica Mars movie, based on the beloved cult TV show.

Though it didn’t happen without complications, the film’s arrival still feels like an important event. TV fandom has reached a fever pitch in the last few years, with loyal devotees rallying around their favorite shows more fervently than ever, using the Internet to amplify what they have to say. Veronica Mars fans have turned out to be the among the loudest of them all. There’s no one reason the show’s cult has remained so dedicated, but one explanation lies in the Internet’s ability to bring people together who feel like outcasts.

Of course, Veronica Mars is hardly the first show that’s had fans clamoring for more since it finished its run on TV. But Paul Tassi of Forbes said it simply had “the perfect storm of criteria” for the crowdfunding that raised money for the movie. Tassi asserts:

“It’s a show with a hugely devoted fanbase who has felt slighted over the years… I doubt we’ll see something like this for a long-rumored 24 movie because that show ran for eight years and few people felt slighted by its cancellation. Also, Mars has the ability to work with a low budget. For as much as I love Firefly, and would love to see a similar Kickstarter, it should be kept in mind that the first film that spawned from the show, Serenity, cost $39 million in production, and barely made that back.”

What Tassi doesn’t mention though is that Veronica Mars is harder to characterize than both 24 and Firefly. As was the case with Veronica Mars, both shows came back from the dead (a 24 mini-series will air on Fox in May) thanks to dedicated fans. But 24’s brand of non-stop action and Firefly’s mix of sci-fi setting and western tropes stand pretty far apart from the witty sense of humor and twisting mysteries that made Mars unique. Somewhere between a teen soap-opera like Gossip Girl and an eccentric crime story ala Twin Peaks, Veronica Mars is unlike the more traditionally accepted genre shows that usually generate Internet fandom.

Perhaps a better comparison is to Arrested Development. Full of running gags and complex storylines, Arrested was perhaps more ripe for Internet dissection than any comedy that came before it. And like Veronica Mars, it returned 10 years after it first aired (for Arrested, this return came in the form of last year’s hotly debated makeover the show got on Netflix), amidst cries from fans whose love only grew in the years following its initial end.

And yet, the Veronica Mars cult does feel different. Consider, Arrested Development won an Emmy and a Golden Globe for Best Comedy Series. Last summer, the Writers Guild of America named it the 16th-best television show of all time. And it launched more than one member of its ensemble to very successful careers after its original run ended. Veronica Mars can’t claim these laurels, but on the Internet, its fanbase has proven to be more powerful than anyone would have thought.

This is because the Veronica Mars cult is about being in a group of losers. In his review for The Atlantic, Nolan Feeney writes:

“A big part of the show’s appeal was that Veronica was the patron saint of high school misfits, the sworn protector of every oddball, outcast, or otherwise disempowered teen who felt she or he didn’t belong… she delivered the fantasy of empowerment that so many teenagers—and plenty of twenty- and thirty-somethings—seldom felt… Veronica Mars, the movie, is a continuation of that fantasy.”

That’s what Veronica Mars has on all other TV cults. The same people who look at a show like Veronica Mars and identify with it because Veronica didn’t fit in now have the opportunity to go on the Internet and identify with a community of like-minded individuals. Moreover, those individuals can come together as a collective to make themselves heard. To this day, the show is, at its heart, a love letter to people who never had any luck, but triumphed none the less; it’s fitting that its continuation should have the same narrative.

The Internet has given a voice to so many who would otherwise remain voiceless. And as people learn how to navigate this newfound power, characters like Veronica Mars continue to resonate. As a misfit who refused to be silenced, it’s easy to see why Veronica meant so much to so many people. Years later, those people have used the technology at their disposal to bring her back, proving that the underdogs of this world can still come out on top.