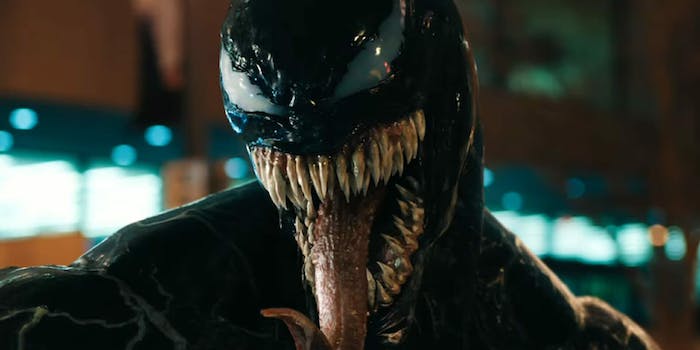 The world is obsessed with the ‘Venom’ trailer—but why?

We can't get enough.

Sony’s Venom seems to be the Suicide Squad of 2018. A superhero spinoff that may not actually be a good movie, but is massively (almost inexplicably) popular months before its release.

This was already obvious when its last trailer trended worldwide on Twitter, something that usually only happens for massive releases like Avengers: Infinity War. But now we have some further stats to back it up. As Screencrush pointed out this week, that Venom trailer attracted a bigger audience than any Spider-Man movie to date.

For the uninitiated, Venom is a horror-influenced spinoff about the Spider-Man antagonist Venom, a gruesome alien symbiote that bonds with a human host. The movie stars Tom Hardy as a journalist who gets infected by the symbiote and gains superpowers as a result. And while Venom is really a B-lister in terms of name recognition, his movie is attracting more online attention than Spider-Man.

Given that Spidey is one of the most famous superheroes ever, this is already pretty wild. But it doesn’t stop there. At 64 million views, Venom is ahead of the trailers for The Last Jedi, Black Panther, Wonder Woman, and Justice League. It’s nowhere near the top two (Infinity War at 202 million views, and The Force Awakens at 101 million), but it’s in the top 20 trailers of all time.

Read more: Everything we know about Sony’s Venom so far

It helps that the trailer’s YouTube image is incredibly eye-catching. Instead of showing Tom Hardy or any indication that Venom is part of a superhero franchise, it just shows Venom’s face. A grotesque open mouth with giant fangs and a slimy tongue, designed to catch the interest of horror fans worldwide—regardless of whether they care about Spider-Man at all.