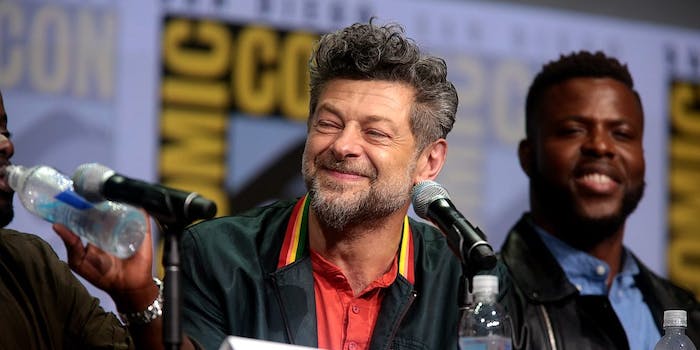 With his visual effects experience, he could be the perfect fit. But will he let Tom Hardy go wild?

Andy Serkis will direct Venom 2, which already sounds like a match made in special effects heaven.

Ruben Fleischer, who directed the first Venom movie, was unavailable due to schedule conflicts with Zombieland: Double Tap, so Sony narrowed down his replacement from a shortlist including Travis Knight (Bumblebee) and Rupert Wyatt (Rise of the Planet of the Apes). According to the Hollywood Reporter, Serkis was the studio’s final choice.

Best known as an actor specializing in motion-capture roles like Gollum in Lord of the Rings and Supreme Leader Snoke in Star Wars, Serkis recently launched a second career as a director. His debut was a biographical drama called Breathe, followed by Mowgli, a live-action/CGI Jungle Book movie that came out on Netflix. Mowgli received mixed reviews, with positive comments for Serkis’ direction and visual effects, but qualms about it’s unexpectedly dark and violent tone compared to the more popular Disney film.

For many Venom fans, there’s only one question to ask about Serkis’ attitude to the sequel: Will he let Tom Hardy improvise? Fleischer encouraged Hardy to go wild while filming the first movie, and that’s how they wound up with some of its weirdest and most memorable moments.

Due out in October 2020, Venom 2 is will co-star Woody Harrelson as the villain Carnage. The script was written by Kelly Marcel, who co-wrote the first film and is Hardy’s longtime friend and creative collaborator.