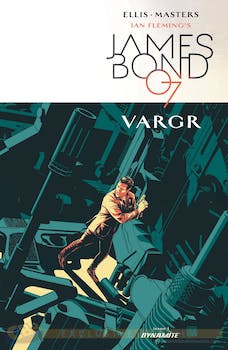 Written by Warren Ellis and illustrated by Jason Masters, James Bond: Vargr faces the daunting task of updating one of the best-known characters in pop culture. Piece of cake.

The first James Bond comic in 20 years begins with a classic cold open—a brutal action sequence that feels like it should come with its own suspenseful soundtrack. Bond is chasing an assassin through Helsinki on a gloomy winter’s night, resulting in more gore than the PG-13 film franchise would ever allow.

There’s a certain amount of vintage Bond box-ticking in Vargr #1—a flirtatious exchange with Moneypenny, some bickering with Q over Bond’s taste in weapons (“A hard holster would ruin the line of my suit,” complains 007), and a new villain with a conveniently unsettling medical diagnosis. But Ellis knows how to write Bond authentically without resorting to pastiche. Meanwhile Masters’ art style is both simple and meticulous, a good fit for Bond (and Ian Fleming’s) pragmatic attention to detail.

With its dark-haired hero and a supporting cast who clearly don’t resemble their on-screen counterparts, Vargr immediately sets itself apart from the world of the Daniel Craig movies. Still, this comic has a lot in common with the more cynical tone of Skyfall and Spectre, highlighting Bond’s violent nature: a necessary blunt instrument in the hands of the British government.

Ellis described Vargr as “a wintry book,” which sounds about right. The title comes from the old Norse word for “wolf” or “destroyer,” and the six-issue series takes place in some rather atypical Bond locales: Finland and Berlin in the middle of winter. Its short arc will be finished by the end of spring 2016—which, incidentally, will circumvent Ellis’s occasional tendency to meander while working on ongoing series.

Treated right, James Bond should be both unpleasant and compelling—which is precisely how he comes across in Vargr. Ellis evidently understands the distinction between telling a story about a violent, misogynist character, and telling a story that actually condones violence and misogyny in itself. For fans of Ian Fleming’s Bond novels, Vargr #1 offers a very promising start.