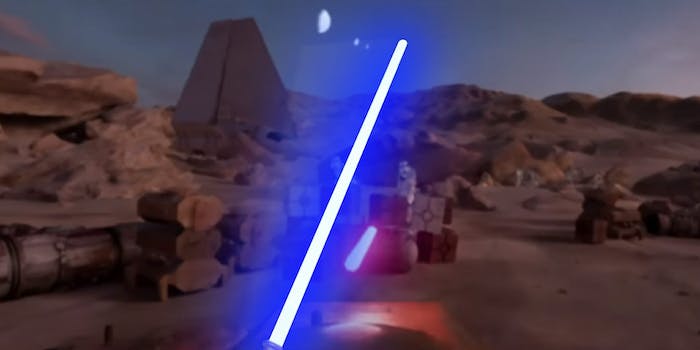 New virtual reality demos show what room-scale VR is all about.

If you have an HTC Vive virtual reality system, you can help repair the Millennium Falcon, meet R2-D2, and hold off Imperial stormtroopers with a lightsaber in VR. No big deal.

A new set of Vive virtual reality demos shown by Valve at the 2016 Game Developers Conference demonstrate the unique experiences offered by room-scale VR and accurate hand controllers. And a short Vive experience from ILMxLAB called Trials on Tatooine shows you what it might feel like to live in the Star Wars universe.

It’s admittedly only a very small taste of Star Wars. Trials on Tatooine might not last more than five minutes. There were no clocks in the simulation, and I was wondering more when I’d get my hands on a lightsaber than keeping track of time.

After a short opening crawl that marks the demo as taking place after the formation of the New Republic and identifies you as a student of Luke Skywalker,  you find yourself on Tatooine. The Millennium Falcon comes in for a landing to drop off R2-D2 as part of a test that Master Luke has in store for you.

A pair of TIE fighters swoop in to strafe the Falcon, after which a panel comes close to falling off the ship and Han Solo talks you through making some quick repairs. While Han and Chewbacca get the Falcon ready to fight, a Lambda-class Imperial shuttle breaks over the horizon and makes a landing in the desert opposite the Falcon.

“OK, give it to me,” I said, reaching my hand out to Artoo, because I knew what was coming. I’ve seen Return of the Jedi maybe a hundred times.

A hatch on Artoo’s dome slid away and out popped a lightsaber that I grabbed and ignited. Then I deflected blaster bolts back at the squad of Imperial stormtroopers that emerged from the open ramp of the shuttle.

I wasn’t very good at hitting any of the stormtroopers with the deflected bolts. Master Luke would have been very disappointed. I couldn’t have cared less. I was in VR, with a lightsaber that actually felt like it was in my hand.

I was probably shot a dozen times, but so what? I was walking around inside of a Star Wars movie.

I have no assurances that Trials on Tatooine is headed for a release on the HTC Vive anytime in the immediate future. ILMxLAB, the studio that combines the talent of Lucasfilm, Industrial Light and Magic, and Skywalker Sound, first showed off the possibility of Star Wars VR experiences last September at the Oculus Connect 2 developers conference. Trials on Tatooine is a proof of concept for what ILMxLAB was talking about.

You’d still probably kill to have a go at it yourself if you’re a Star Wars fan, which of course is the point. VR is the biggest thing at GDC this year, and VR developers still have a long way to go in convincing the uninitiated as to why they should shell out for this gear. The Vive’s asking price is $800.

Trials of Tatooine was actually the stinger at the end of a set of Vive demos that Valve is showing this week. The meat of the experience was The Lab, a series of small experiences and mini games designed to show off what the Vive can do. 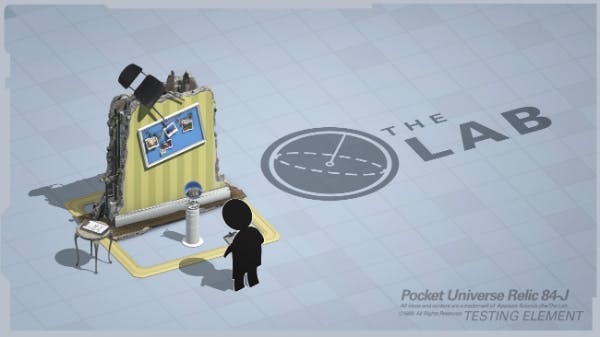 The Lab is like a hub set within Aperture Science, the setting of the Portal series. From that hub you can access a demo called Slingshot—where you fire little spherical artificial intelligences across a storeroom at Aperture—or another demo called Longbow where you fire arrows at cute little barbarians trying to bash their way through a castle door.

There’s a photo scene set on Vesper Peak in Washington State, where you can play fetch with a robot dog. There’s an old-school arcade-game-style experience called Xortex, that feels like picking up a toy airplane and pretending to fly it around the room, only it’s shooting lasers and blowing things up while dodging bullets.

Trying to describe Trials on Tatooine to you is one thing, because chances are you know what the Millennium Falcon and R2-D2 and stormtroopers and lightsabers look like, and even if the trailer above is very short, it’s at least something to get your imagination working.

But Slingshot, Longbow, and Xortex? They were all very smooth, didn’t make me nauseous even though I had taken my glasses off—I had trouble getting the Vive units to accommodate my keeping the glasses on—and were enjoyable.

Absent screenshots or video (Valve provided neither), there’s no way I or anyone else can adequately describe any of these experiences from The Lab in a way that will make you feel what it’s like to play them. And this, yet again, is the quintessential problem with VR. You have to try it for yourself.

Valve will be giving The Lab away in April for free, so Vive owners can have their friends over, put them into the Vive, and let them pick whichever minigames from The Lab they feel like playing.

The fate of the Vive could ultimately depend on these sort of home VR parties, because it’s the only way many people will actually get to try what room-scale VR feels like unless Valve gets aggressive with setting up demos for the public.

The more I use the Vive the more impressed I am with the system, and the more I despair that I can’t make you understand what the experience is like, even though there are so many awesome things you can see and do.

Screengrab via Road To VR/YouTube | Remix by Jason Reed