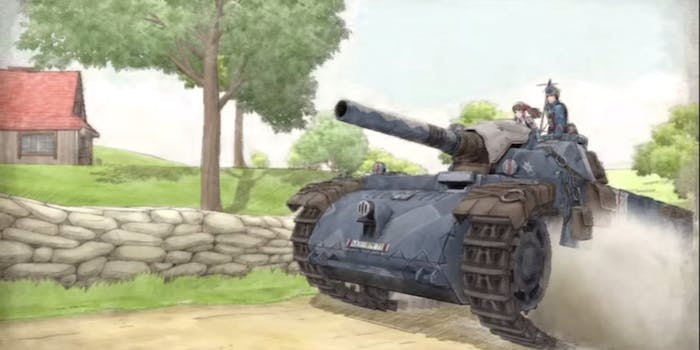 The six-year-old game is blowing up all over again.

The sure sign of a classic game: It sells like gangbusters on Steam six years after it was released.

Valkyria Chronicles, originally released in 2008 for the PlayStation 3, has been re-released for PC today for an asking price of $20. This marks the return of one of the most celebrated games of the previous console generation, on a platform that makes Valkyria Chronicles available to an entirely new audience.

Most critics would file Valkyria Chronicles under the JRPG genre—Japanese role-playing game—which denotes turn-based tactics and a story with anime sensibilities. Valkyria Chronicles takes place in an alternate universe Europe in the 1930s, and is aesthetically modeled after World War II. The neutral nation of Gallia is caught in a war for resources between western and eastern military alliances, and the player is part of a Gallian military unit trying to repel the invaders.

When the game was released in 2008, it was praised for its watercolor art design, music score, and a more personal style of combat than other games in the genre. Valkyria Chronicles blends top-down, map-based tactical planning, and third-person camera perspectives during battles. The re-release is being praised for its faithfulness to the original PlayStation 3 version.

As of the time of publication, Valkyria Chronicles was holding the number three spot on Steam, topped only by Football Manager 2015 and Call of Duty: Advanced Warfare, which are new entries in massively-popular franchises. That’s very good company for Valkyria Chronicles to be in considering it is six years old, which can be a very long time in video game years.