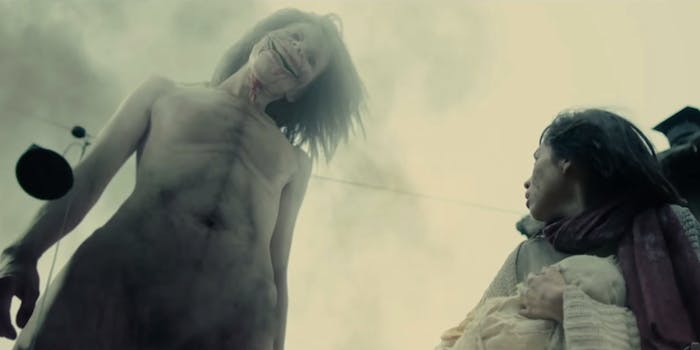 The movies are starting to sway us, even though they don't have too much in common with that anime you like.

We’ve been pretty skeptical of the upcoming live-action Attack on Titan duology after it jettisoned half the cast and a lot of what we love about the wildly popular anime. But even we have to admit the trailers are doing a good job of selling us.

Hard on the heels of the U.S. premiere for the first of the two films, Funimation, the film’s distributor, has released the first English-language trailer for the movie.

The best part is that the new trailer indicates the two films will be headed to U.S. theaters, though there’s no word of a release date. The first film opens in Japan on Aug. 1.

Given that manga creator Hajime Isayama has yet to provide us with many answers about what exactly is the secret behind the titans, we’re not sure what new revelations, if any, the plot of the two-part film series will reveal. And we’re not even going to touch that Eren/Mikasa kiss.

But we do know we’ll be in cinemas Aug. 1, eager to enjoy the spectacle along with the rest of you.