The Uptown Superheroes March in Hudson Heights is the best place to be this Sunday.

When her fellow pre-schoolers told 4-year-old Ellie Evangelista she couldn’t be Spider-Man because she was a girl, she did what Peter Parker would do: She rallied the community to come to her aid.

Now, Ellie’s New York City neighborhood is throwing her a parade in order to show her that girls can be superheroes, too. 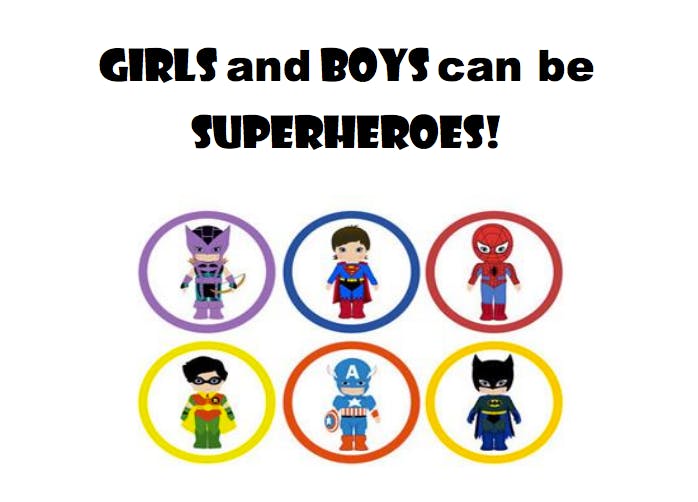 The city’s first Uptown Superheroes March will take place this Sunday in Hudson Heights, a little-known neighborhood in Upper Manhattan that constitutes the sub-grid of Washington Heights running between Fort Tryon and Forth Washington parks.

Ellie’s mother, Margaret Ryan, told DNAInfo that her daughter had decided to pretend to be a boy during the day so that she could be Spider-Man while she was at school. When Ryan introduced her to other female superheroes like Spider-Woman, her daughter insisted she still wanted to be Peter Parker.

Ryan asked a listserv for local parents for advice about what to do. One of them, Cheryl Burgos, came up with the idea of throwing Ellie a parade.

A local flyer for the event announces:

Come join us for an Uptown Superheroes March and support ALL children’s love of Superheroes.

Girls too can be superheroes!

All children, all ages, wear your favorite Superhero costume or outfit

*** Please bring posters with your favorite sayings showing that both girls and boys can be superheroes! ***

Although it’s important to affirm to little girls everywhere that they can be superheroes regardless of their gender, it’s equally important support children who is showing signs of gender dysphoria or gender ambivalence. Non-binary kids and trans kids should know they can also be superheroes, regardless of how they present in public.

Based on what Ryan told DNAInfo, her daughter’s distress may have been due to good old classroom sexism. If that’s the case, well, this is what happens when girls never see anyone except white men playing superheroes or really represented in active lead roles onscreen. And it’s not necessarily Marvel Comics’ fault—so far, the comics giant has given both Miles Morales and Gwen Stacy the chance to don a cowel and sling webs in the role of Spider-Man.

Marvel Studios, on the other hand, is currently gearing up to cast its umpteenth white male actor as Peter Parker.

By the time Captain Marvel and Wonder Woman, the first female-led superhero movies in an eternity, both debut in 2017, it’s possible that little Ellie will have outgrown the belief that she can’t be a superhero.

Or perhaps she’ll have moved on to being told that she can’t be good at math and science, or computers, and that she’s only a fake geek, all because of her gender.

Listen, Ellie, it’s a tough world out there for a girl.

A local parade won’t change that; but it might make it easier for you to find a group of kids like yourself—ones with the super-powered ability to smash through sexist gender roles.