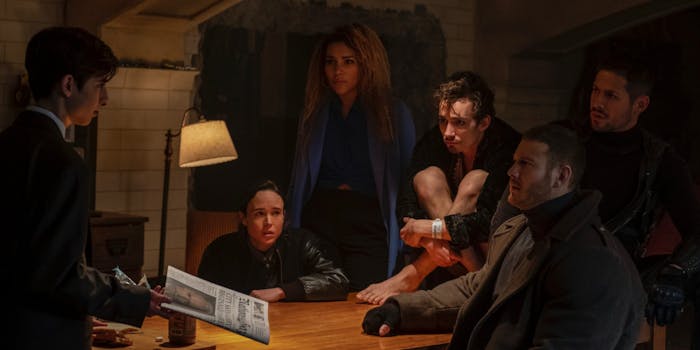 The panel had plenty of exclusive footage and new hints.

Netflix offered exclusive looks at two of its upcoming shows for fans at New York Comic Con Friday night as part of a supersized panel that showcased the streaming service’s spookier side.

Two of the TV shows featured on the panel, The Haunting of Hill House and The Chilling Adventures of Sabrina, are set to debut on Netflix later in October. However, The Umbrella Academy and The Dark Crystal: Age of Resistance are both a ways off, and the cast and creative minds behind those particular shows had plenty of tricks up their sleeves to get fans excited.

First up was The Umbrella Academy, which is an adaptation of the Eisner-award winning series by Gerard Way and Gabriel Bá. The all-star cast—which included Mary J. Blige, Ellen Page, Robert Sheehan, Tom Hopper, Emmy Raver-Lampman, David Castañeda, Aidan Gallagher, and Cameron Britton—were on hand to introduce fans to the first look at the cast in action.

The trailer, which was not released online, explains the show’s premise. It kicks off with the reveal that 43 infants were born to women who weren’t pregnant before that day in 1989, and Sir Reginald Hargreeves founded the Umbrella Academy and adopted seven of them. Those children become estranged, but the six remaining children reunite decades later after their father’s death—and after years of tumultuous history, it’s a less than pleasant reunion. Chaos ensues with each of the characters getting a moment to shine.

The trailer immediately set the dark and humorous tone with glimpses of several characters’ powers in action. According to Comic Con moderator Josh Horowitz, the show also includes some dancing in an early episode.

“I’ve never played anything close to this,” Blige added about her character, the time-traveling assassin named Cha Cha. “I’ve always wanted to be a superhero or supervillain or assassin or something where you have to learn how to do martial arts and shoot a gun. So yeah, it’s perfect. Oh, I picked up some skills.”

“I couldn’t get big enough for this role, so I’m not sure how much I can reveal, but you’ll see as the show comes out that I couldn’t have gymed enough,” Hopper, whose character, Luther Hargreeves, has super strength, said. Page noted that while her character plays the violin, she’s not as adept and gave props to anyone who played it.

A short time later, fans also got the first look at The Dark Crystal: Age of Resistance with producer Lisa Henson and director Louis Leterrier revealing some new details about the project they said took seven years to develop and only wrapped up the week before.

“It’s a work of love, a work of art, and we can’t wait to share it with you,” Leterrier said.

They revealed that Age of Resistance is a prequel, which uses the Gelfing ruins at the Wall of Destiny in The Dark Crystal film as a jumping point into the show. According to Henson, Avatar: The Last Airbender, Game of Thrones, and The Lord of the Rings served as influences. Things, she added, “that have a lot of depth and a lot of detail built into the world-building.”

But more importantly, they revealed that they’re choosing to rely on actual puppetry instead of CGI to bring the creatures to life (although they are using CGI to digitally remove puppeteers in certain scenes).

“We’re not using CGI on this one,” Leterrier added as the audience cheered. “It’s puppets, man. Puppets!”

Fans won’t have to wait too long to see these shows for themselves. Both are coming to Netflix in 2019, and while The Dark Crystal’s exact release date is still unknown, The Umbrella Academy will arrive on Feb. 15, 2019.