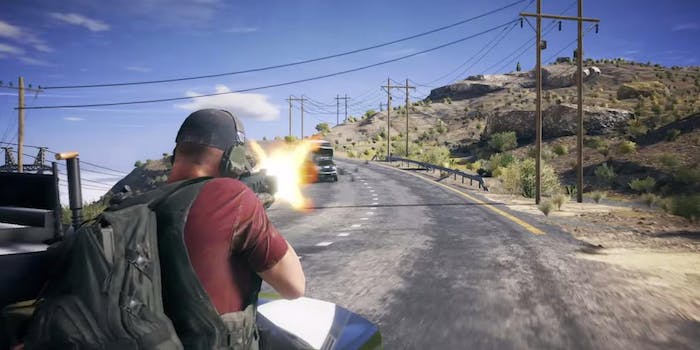 Tactical shooters are what Ubisoft's E3 is all about.

There were six major games shown at Ubisoft‘s E3 2015 press conference today. Three of the titles started with the words “Tom Clancy’s.”

The Division has been teased since Ubisoft’s 2014 press conference at E3. It’s a story about a weaponized virus dropped on New York that turns the city into a deserted shell of its former self. We knew that players in The Division would be working in squads to scout the city looking for supplies and such, with enemy looters to avoid or take down.

What we didn’t know prior to today’s press conference is that The Division might have an MMO-like structure. In the demo, a group of players scouting the city run into another group of players. They could cooperate or fight.

The radio chatter is clearly meant to mimic gamers on an online service. They reference loot, call bad guys “elites,” and talk about not pulling aggro. That’s the language of MMOs. Perhaps Destiny will become a reference point for understanding The Division.

Rainbow Six: Siege also premiered at E3 2014. In the co-op gameplay demo at Ubisoft’s press conference today, four players in the roles of Rainbox Six agents raid a consulate seized by terrorists. It didn’t reveal anything we didn’t expect, based on the footage shown last year.

What was a surprise is that Angela Bassett is playing a character named “Six,” the deputy director of the Rainbow Six counter-terrorism unit. Bassett made a short appearance at Ubisoft’s presser to promote the game.

Bassett’s appearance in the trailer looks photorealistic. Ubisoft may be giving Kevin Spacey’s performance in Call of Duty: Advanced Warfare a run for its money.

The last Tom Clancy game Ubisoft showed at its press conference was a fresh reveal, even if it also hails from an established, long-running franchise. Ghost Recon: Wildlands is an open-world game with an apparent crime problem. The gameplay demo showed Ghost Recon agents raiding a drug lab, either via assault or stealth, by way of demonstrating the sort of freedom you would usually have in an open-world game.

After a few years of controversy, first with the dissapointment of Watch Dogs and then with the marred launch of Assassin’s Creed: Unity, you can’t blame Ubisoft for playing it safe. Shooters at E3 are always the safest bet of all.