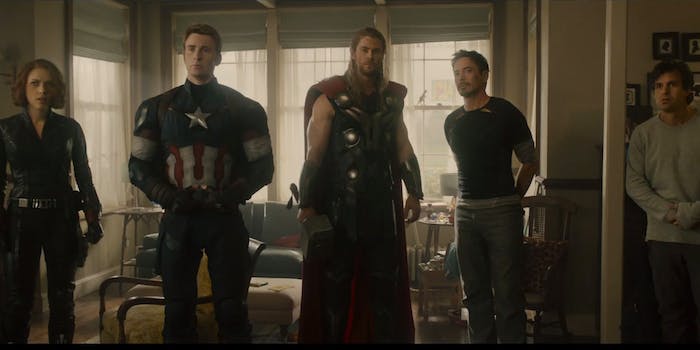 It's the "OMG" heard round the universe.

If there’s one universally acknowledged truth of cinema at this point, it’s that Marvel knows how to create buzz. Its latest promo tactic for the Age of Ultron turned #AvengersAssemble into a worldwide today, as fans successfully “unlocked” the third trailer for the film a day early.

And it’s a doozie.

After teasing fans with the news that the trailer would debut Thursday night during the premiere of ABC’s new show American Crime, Marvel dropped the announcement this morning that fans could get the trailer a full day early online if they tweeted using the hashtag #AvengersAssemble.

Cue Twitter implosion. The hashtag pretty much instantly started trending worldwide and stayed there all morning and afternoon. When the trailer finally hit YouTube at around 1:30pm ET, the fandom’s reaction was, well, this:

We can’t blame them. I mean, first off, combining James Spader’s lethally seductive voice-over with shots of the Eyrie and the throne room from Game of Thrones is pretty much genius. And the rest of the trailer is brimful of fanservice. Fans of the science bros (Tony and Bruce) and Cap/Stark must be losing it about now. Natasha and Clint can clearly be seen fighting alongside each other in battle in exactly the way fans have wanted since the first film. And, whoa, those hints of Bruce and Natasha? Yes, please.

And speaking of Natasha, check out how she slams out of a jet on a bike and floors her way into the action. I already want to inject this movie into my veins with a syringe, and I’m not even in this fandom.

Granted, we still don’t know what kind of role Elizabeth Olsen has, if any, and I can already see the fans spending the next two years of our lives angsting over the inevitable ramifications that will lead to Civil War, one of the most famous storylines in comic history. But all in all, this is great stuff.

We can barely handle these guys when things are good. The delicious drama of Age of Ultron is already starting to undo us, and it’s not even here yet.