Tumblr turned a 30-second anime commercial into a fandom, and now it's becoming a real series.

Remember when Tumblr, along with all of Asian fandom, took a 30-second studio promo spot and turned it into an entire fandom with characters, shipping, fanworks, and more?

The hype over the so-called “swimming anime” was an avalanche of free publicity for the animation studio, Kyoto Animation (KyoAni), who did the commercial to show off their mad skills.

And now the inevitable has happened: KyoAni has announced that the swimming anime is becoming a reality: the anime, titled Free!, is based on Kōji Ōji’s High Speed!, an honorable mention recipient in the 2nd Kyoto Animation Award in 2011.  The original 30-second spot gave fangirls a whole team of yaoi-licious bishounen (hot anime dudes) to get excited about, but the announcement for Free! comes with character cards and tantalizing screen caps. 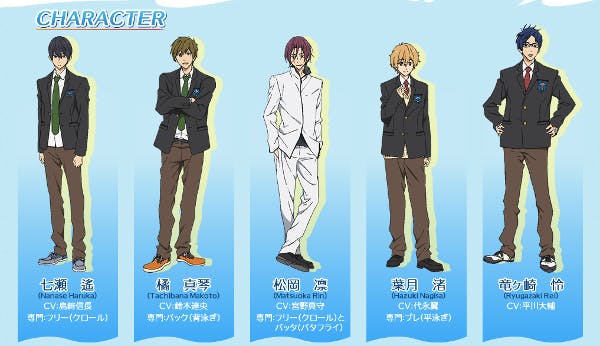 The anime is scheduled to begin airing sometime in July. The cast list includes notable voice actors from popular anime like Chihayafuru and Hunter x Hunter.  Tumblr is already beside itself with the news, churning out GIF sets, fanart, and more.

“i can’t wait for their actual personalities to be nothing like what tumblr has arbitrarily assigned them based entirely on appearance,” said one amused Tumblr fan.

Meanwhile, the denizen’s of 4chan’s anime board, /a/, are enraged because KyoAni is making a “gay” anime.

“KyoAni is ruined,” reads one thread with hordes of angry commenters lamenting the fact that Kyoto Anime, long known for its gorgeous but blatantly fanservice-styled anime about teen girls, is making a similar series geared towards girls. 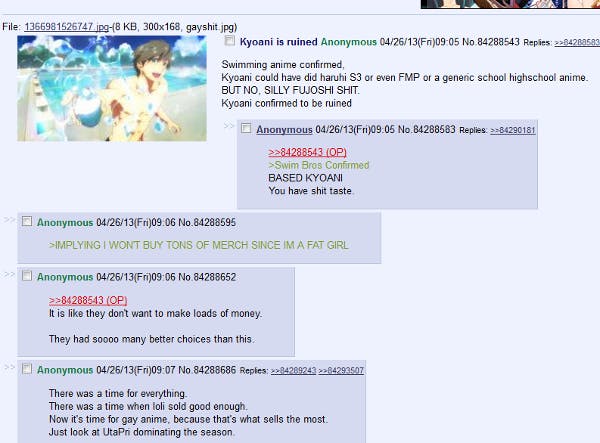 With its lingering shots of boys in swim trunks, the original promo seemed to be courting fans of yaoi, or gay Japanese manga geared towards young women. However, the mostly fully-clothed 90-second preview seems to emphasize team characterizations over gratuitous skin shots, which indicates that in practice, Free! may be less yaoi-licious and more like a shounen sports anime. Think Prince of Tennis but with more water.

Still, the overlap between Asian fandom yaoi fans and English-language slash fans is negligible at this point in the evolution of fandom, and it looks like KyoAni has realized that a little pandering to the male/male fandom subculture will be good for them on both sides of the Pacific.