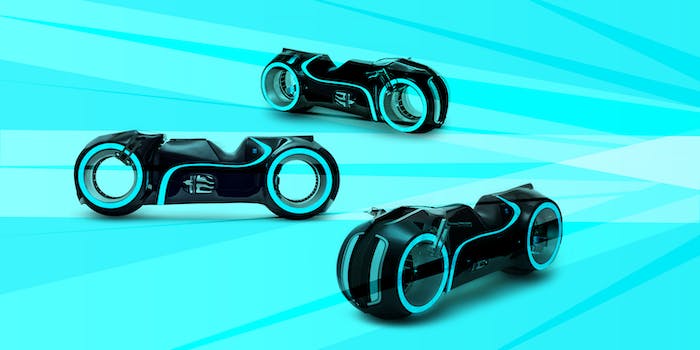 If you have $40,000 burning a hole in your pocket, you can place a very strong starting bid on a street-legal replica of the light cycle from Tron: Legacy.

In 2011, Parker Brothers Custom Choppers in Port Canaveral, Fla., teamed up with Evolve Motorcycles to build a light cycle replica powered by rechargeable lithium batteries. The upgraded model can travel up to 100 miles on a four-hour charge and hit speeds up to 100 miles per hour.

One of these real-life light cycles, further customized by the Andrews Collection, is Lot 259 in a Sotheby’s auction taking place on May 2. Sotheby’s is advertising a price between $25,000 and $40,000.

Nightline produced a news segment in 2011 on this light cycle replica when Evolve Motorcycles was just beginning to take orders for it. The video is the best thing we can offer by way of helping you decide if you want to pony up for this thing.