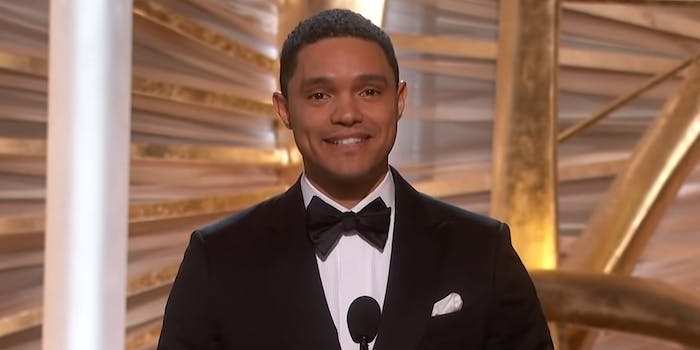 Scripted bits from presenters at the Academy Awards can win the audience over or lose them, but it’s not often that the presenter gets the last laugh—and that’s exactly what Trevor Noah did at the Oscars Sunday night.

Noah was on hand to introduce best picture nominee Black Panther (which ultimately walked away with three awards). He brought up the film’s universal appeal, joking that no matter where he went, people would relay Black Panther’s rallying cry, “Wakanda Forever,” to him, and that he grew up in Wakanda himself.

“Growing up as a young boy in Wakanda, I would see King T’Challa flying over our village, and he would remind me of a great Xhosa phrase,” Noah said. “‘Abelungu abazi’ uba ndiyaxoka,’ which means, in times like these, we are stronger when we fight together.”

Noah’s message, which received applause from the audience in the room, led into the Black Panther clip, and the show moved on. On the surface, Noah’s use of Xhosa was another instance of Oscar presenters and winners speaking other languages during the ceremony itself.

But as some South Africans pointed out soon after Noah spoke, the translation that he provided the Oscar audience wasn’t quite what he actually said.

With his use of Xhosa, Noah got to have it both ways. He got a more poignant message across, but he was also able to poke fun at just about everyone in the room (and many people watching from home) without them knowing it. And those who did get it can appreciate the move even more.