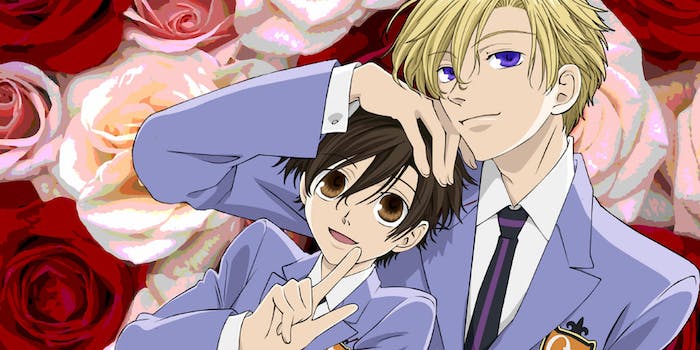 When it comes to transgender representation, anime has room to grow

The interest in stories that represent characters from across the gender spectrum is growing.

“Welcome to the Gender and Anime panel,” joked boota3, the panelist presiding over a packed room at Anime Boston last month. “Otherwise known as the Attack on Titan dub premiere.”

The joke got a loud laugh—no surprise since the controversy surrounding the premiere of the dub was part of what the audience had come to discuss. Last year, Attack on Titan‘s creator, Hajime Isayama, took the unusual stance of officially refusing to verify the gender of one of the manga’s popular side characters, Hange. Isayama left the question up to the reader. Both versions of the anime, however, cast Hange with a female voice actress.

This is the kind of thing that transgender anime fans—and fans of transgender anime—have to live with. At Anime Boston, although the “Gender and Anime” panel was standing-room only, and although the hallways teemed with gender diversity, there wasn’t a lot of diverse gender representation to be found in the content of the shows and manga that fans were there to discuss. 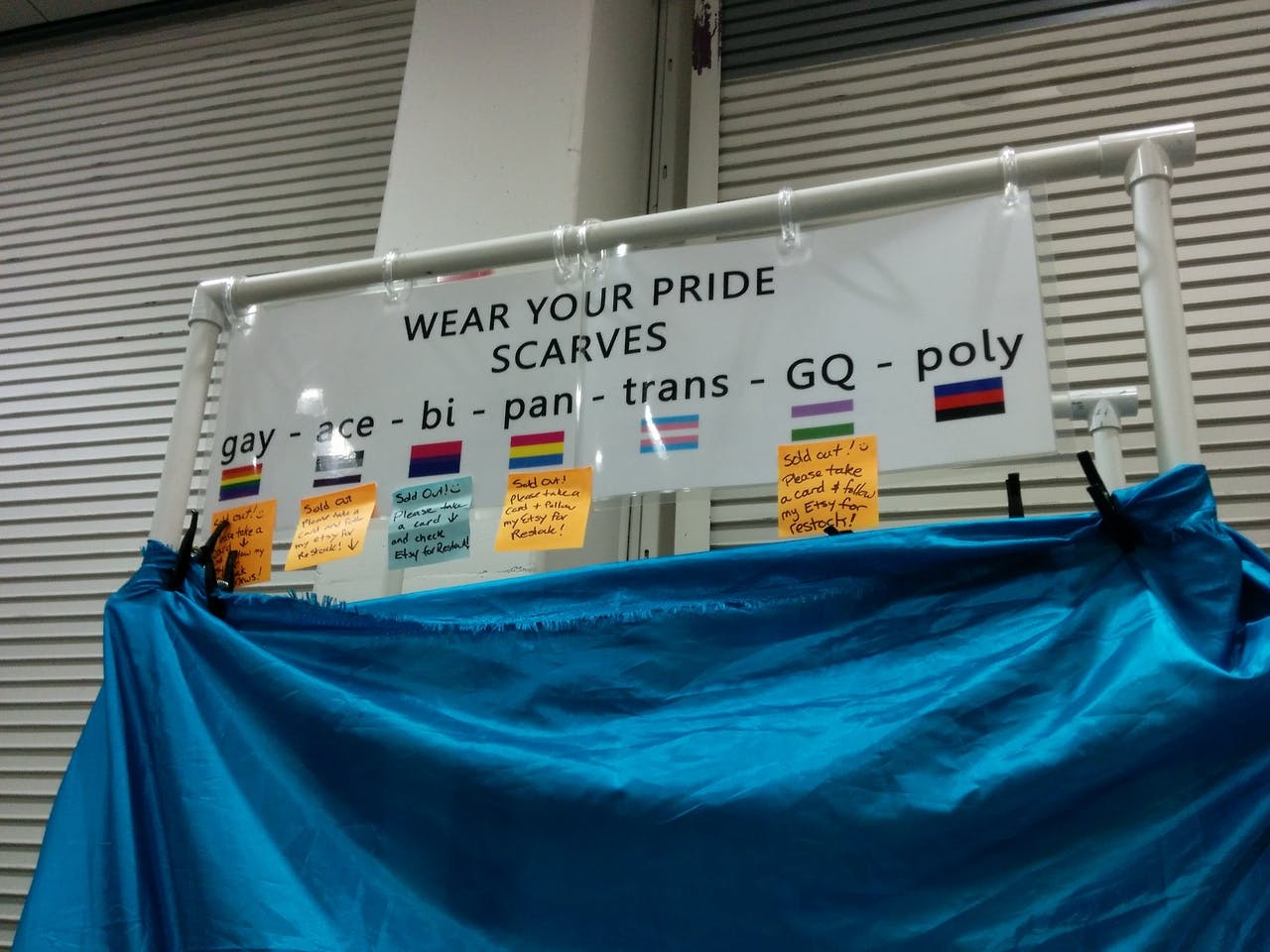 This stand of “pride” scarves for gay, queer, and genderqueer wearers sold out at Anime Boston by the second day of the con. (Photo via gerbifluff/Tumblr)

Anime and manga aren’t alone in having a dearth of gender representation; but Japanese culture offers a unique take on the performance of gender that often lends interesting interpretations to popular anime and manga narratives. For example, the female main character of the popular anime Ouran High School Host Club spends much of the anime cross-dressing in an all-boys’ club: 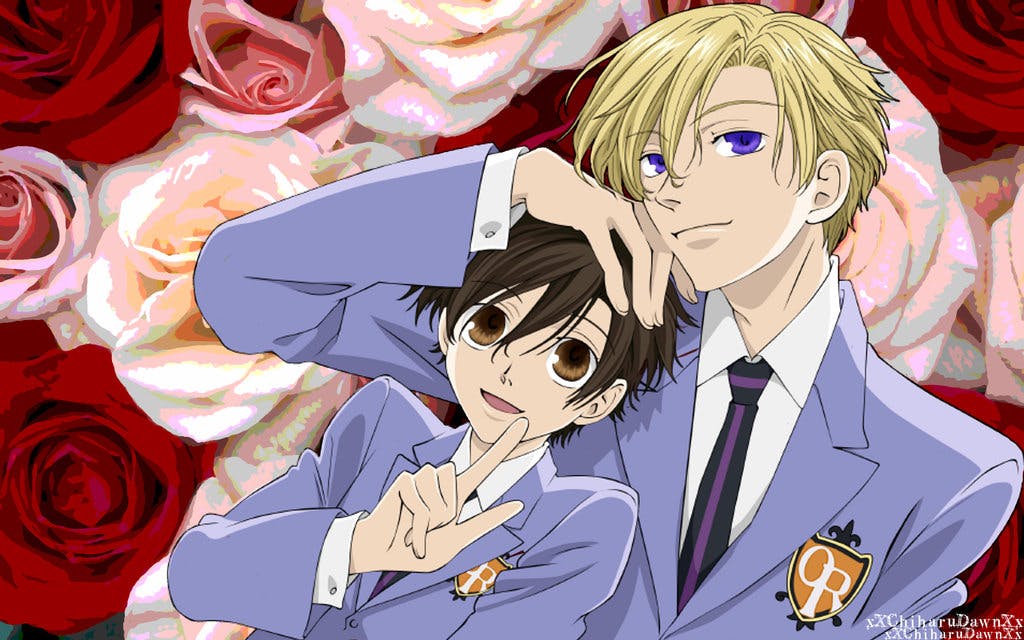 By the end of the anime, after the show’s often comical explorations of gender performance, Haruhi (the one on the left) is back in dresses; but unusually for the kind of shoujo series that Ouran parodies, she rejects returning to safely heteronormative territory. In fact, Ouran is one of the rare instances in which an anime character embraces, if not a genderqueer identity, then at least a gender-ambivalent one.

The more typical and “traditional” attempt to portray both crossdressing and genderqueer identity in Japanese storytelling narratives has usually been to make it a joke. This includes the old standby of using flamboyantly gay people who crossdress, or drag itself, as humor. Even though drag can often be a transformative process as part of a transgender coming-out, you’re more likely to see it portrayed for laughs, or even as a weird fetish.

One of the worst examples of this is the 1981 gag manga turned anime, Stop! Hibari-kun. Originally and inexplicably published in Shounen Jump, this story concerns the relationship between its male protagonist and a beautiful transgender girl named Hibari-kun—”kun” being applied to her as part of the series’ constant humorous reminder that Hibari was assigned male at birth. The title’s imperative. “Stop!” is an order to her to stop living as a girl and resume “normal” behavior:

In gag manga and anime like this one, transgender identity often functions as a “trap,” in this case for the show’s protagonist, the boy who constantly has to remind himself that Hibari’s not “really” a girl and he’s not socially permitted to return any interest she shows in him.

As transgender representation becomes better understood thanks to activism from the community, these kinds of depictions have grown less and less frequent. Still, popular fantasy characters like Ranma and Naruto have been known to use the “trap” of gender-switching in order to get what they want, often by temporarily seducing a man with feminine wiles. It’s all very heteronormative.

At Anime Boston, while praising Wandering Son as being one of the only true transgender anime in existence, panelist Sophia also issued the reminder that not all transgender experience involves realizing and accepting your identity from a young age. At the opposite end of the cautionary spectrum, beware narratives that seem to fetishize trans confusion or trans suffering, and narratives that portray trans or genderqueer people as “brave,” implying that being non-binary is a behavioral choice rather than an identity.

Above all, both panelists cautioned listeners to be sensitive when discussing gender identity, especially when interacting with cosplayers at conventions. Because of the popularity of “crossplay,” in which fans cosplay opposite-gendered characters, it might be easy to assume that all non-binary cosplay is crossplay. Don’t.

“I don’t deal with this outside of the convention environment,” said Sophia, “but because of that whole ‘trap’ culture, people will say to me, ‘oh, nice crossplay,’ ‘I didn’t realize you were a guy,’ etc etc. Don’t be an ass.”  The safest way to interact with a cosplayer if you’re not sure of their gender is to refer to them by their character’s name.

Anime conventions are, for many fans, among the very few places where they feel safe and able to express their true gender identity, whether in or out of costume. And while it can be hard for others to accept different identities for a friend or loved one, the panelists offered the insight that the easiest way to handle their transition is to simply “retcon their whole backstory.”

Given the packed room at Anime Boston, as well as the ongoing interest in characters like Attack on Titan‘s Hange, it’s clear that interest in transgender anime characters is only growing.

But while calling for more and better representation across the gender spectrum, don’t forget to be good to a real-life transgender fan near you.