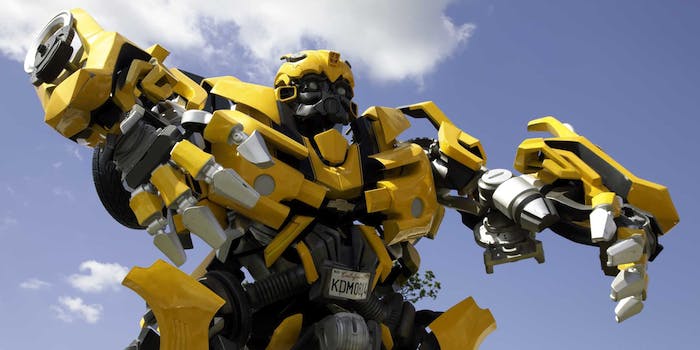 Brace yourself for 4 more ‘Transformers’ movies

We all knew this was coming, but Hasbro has finally confirmed its plans to continue the Transformers franchise.

At the kids’ programming conference MIP Junior this weekend, Hasbro Studios president Stephen Davis discussed Hasbro’s plans to make at least four more Transformers sequels. To do so, Hasbro has taken the unusual route of recruiting a TV-style writers’ room to make a detailed plan for the future of the franchise.

“We decided that we wanted to plot out the next 10 years of the Transformers franchise, so we got together in a three month period of time. Nine of some of the most creative writers I have ever worked with, shepherded by Akiva Goldsman, who many of you may know won an Academy Award for A Beautiful Mind, and written a bunch of great movies. And they plotted out the next 10 years of Transformers. Similarly we’re doing the same in television and digital. So stay tuned. Transformers 5 is on its way. And 6 and 7 and 8.”

News of this writing team first appeared a few months ago, prompting comparisons to the Marvel Studios model of filmmaking, which weaves multiple ongoing plotlines across several sequels and spinoffs at once.

While the Transformers movies are definitely lucrative, they have never been praised for their narrative complexity. However, this may change now Hasbro has assembled a team who between them have worked on the X-Men franchise, The Amazing Spider-Man 2, multiple strands of the Marvel Studios franchise, and The Walking Dead.

Still, things aren’t likely to change too much for Transformers 5. It’s still planned as a direct sequel to Transformers: Age of Extinction, directed by Michael Bay and starring Mark Wahlberg—although the Transformers universe is highly likely to expand into numerous spinoffs if Hasbro’s new experiment with franchise storytelling is a success.