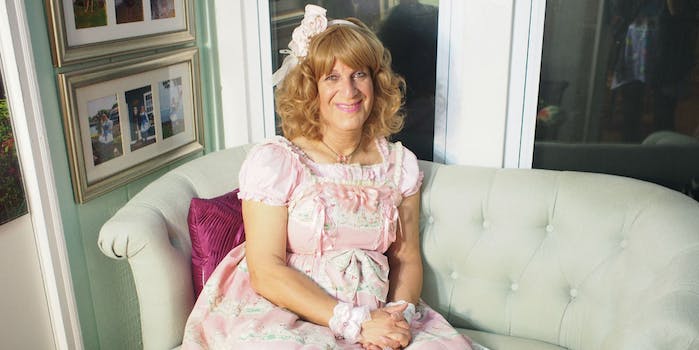 By embracing a Japanese subculture, one woman has discovered her perfect place in the world.

The first thing you see when you walk into Andrea Baker‘s home is pink. Not a gentle blush, but every wall the vivid shade of rose.

Baker welcomes me inside. She’s wearing a ruffled dress with a floral pattern, elaborate lace detailing, and tiny bows that look right at home in her equally feminine living room. The lace cuffs at her wrist are decorated with ribbons and tea accessory charms. But her glow is center stage, easily the most winsome decoration of them all. 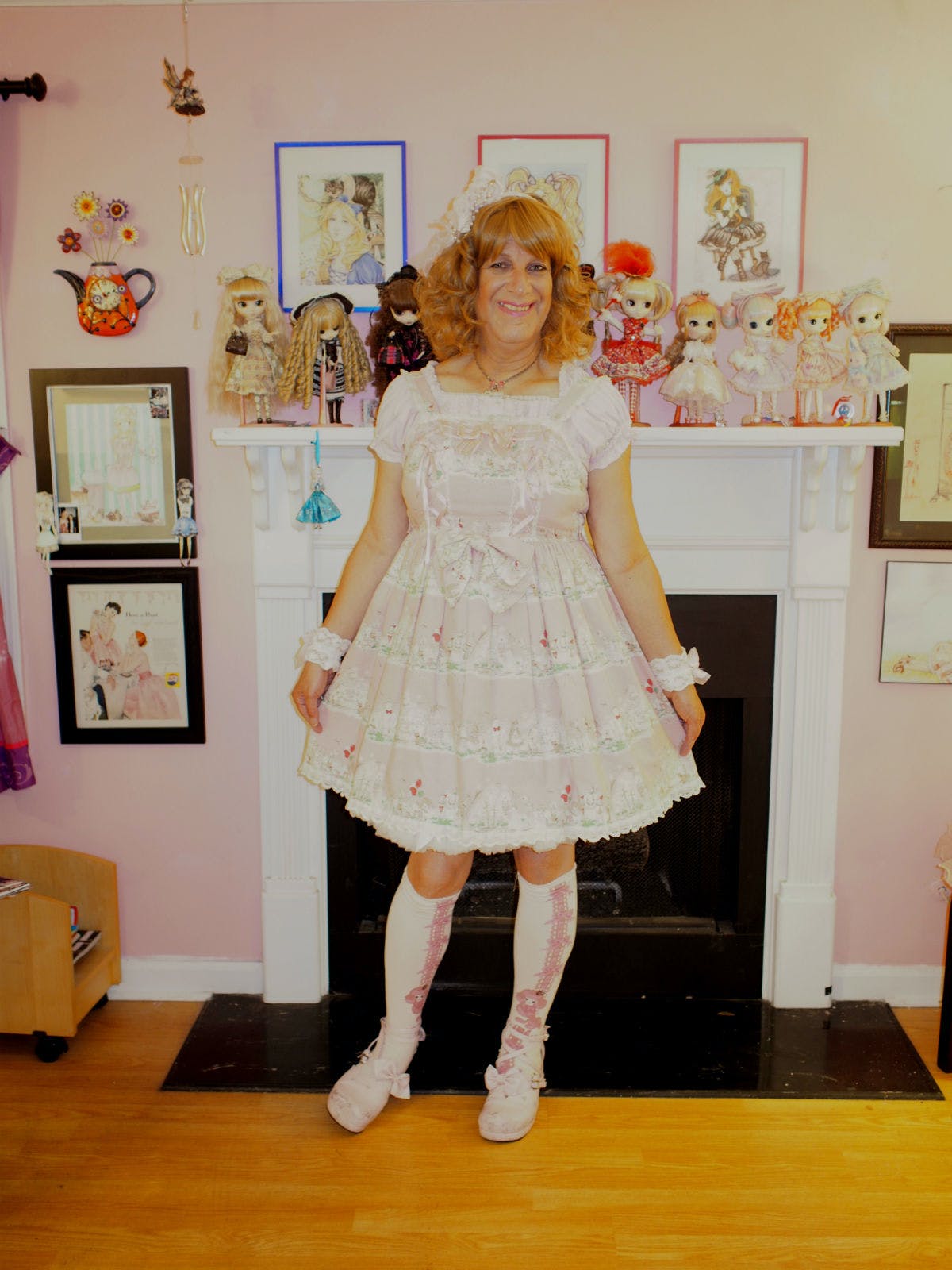 Baker is a proud member of the Lolita community, which can seem bewildering to some outside of it. Its members are best known for their elaborate clothing, wearing wide skirts over petticoats, ruffled white blouses, and bows in their beautifully styled hair. While Lolita style originated in Japan and has flourished into many cultural subsects, from goth to the nature-inspired mori. Today it’s getting more common to spot these finely dressed ladies strolling about at U.S. anime conventions from time to time.

Of course, people stare, and they are even more apt to stare at Baker, who is not only a Lolita, but also older and trans. But since her transition has been a lifelong process (“Ongoing since I was a teenager,” she says), she’s grown to not mind them so much. Besides, what she’s found in the Lolita community is something that even the transgender community couldn’t quite offer: a sense that she was, finally, home. 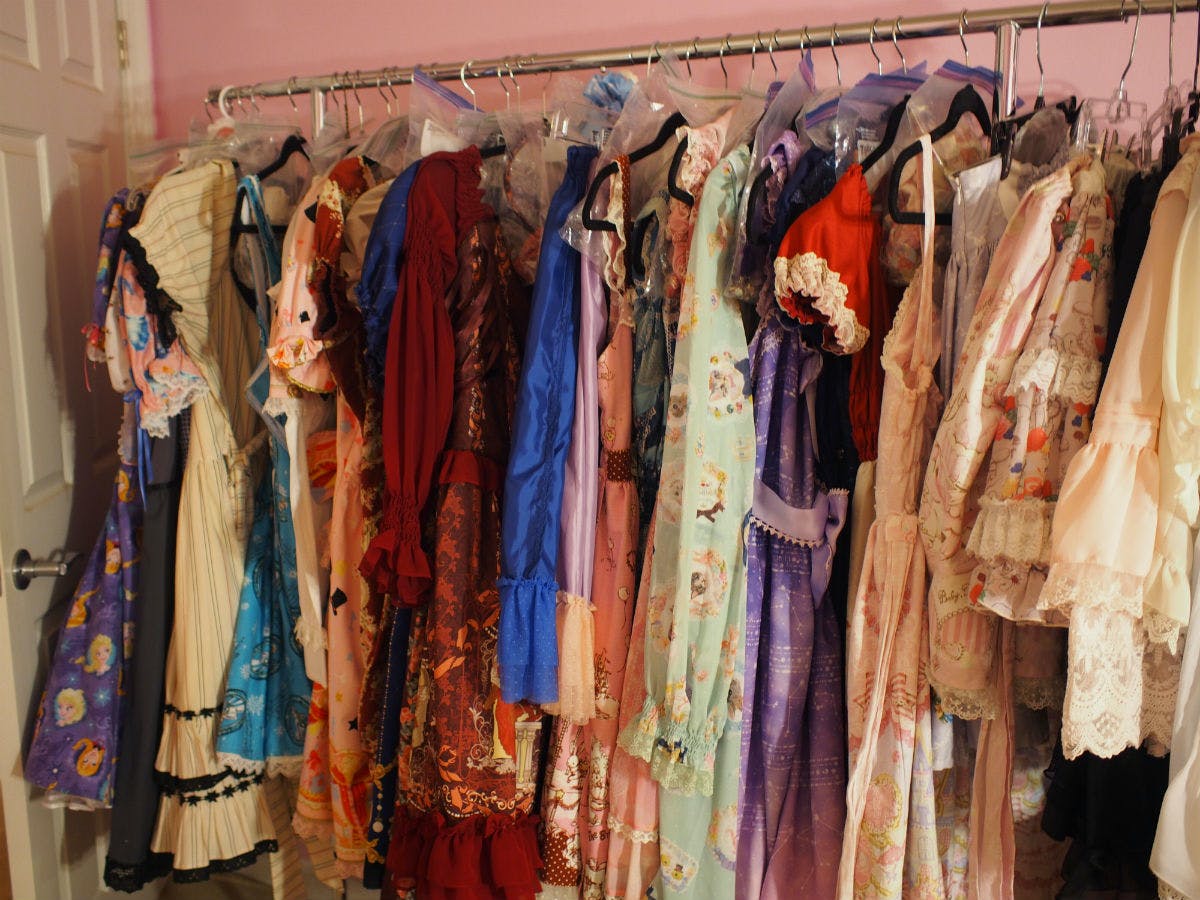 Baker’s Lolita collection is worth thousands of dollars

“It’s not really about the fashion,” Baker said girlishly over a meal of bright red strawberries and delicate tea crackers, served on charming dessert plates decorated with clock faces. “It’s all about us expressing ourselves and being who we are. The self-confidence that brings is something I see in everyone [in the community]—and in me, too.”

For a community that seems to be all about fashion, it’s hard to follow what Baker means at first. After all, top brands in the Lolita world such as Angelic Pretty, Baby the Stars Shine Bright, Innocent World, and Haenuli retail their dresses for hundreds of dollars each. Investing seriously into Lolita designers means spending a lot of money. But if the fashion brings a person as much joy as it does to Baker, its a worthy investment.

Baker first came across Lolita via Live Journal eight years ago, where the community still thrives today. While she was already an active member of the transgender community in Atlanta where she lives, she sensed that there was a still a void within that wasn’t being filled for her.

“There was a part of my life where I wasn’t getting where I was going, I was in the wrong group,” she said. “I couldn’t find my place. So I saw Lolita fashion, and I thought ‘This is amazing.'” 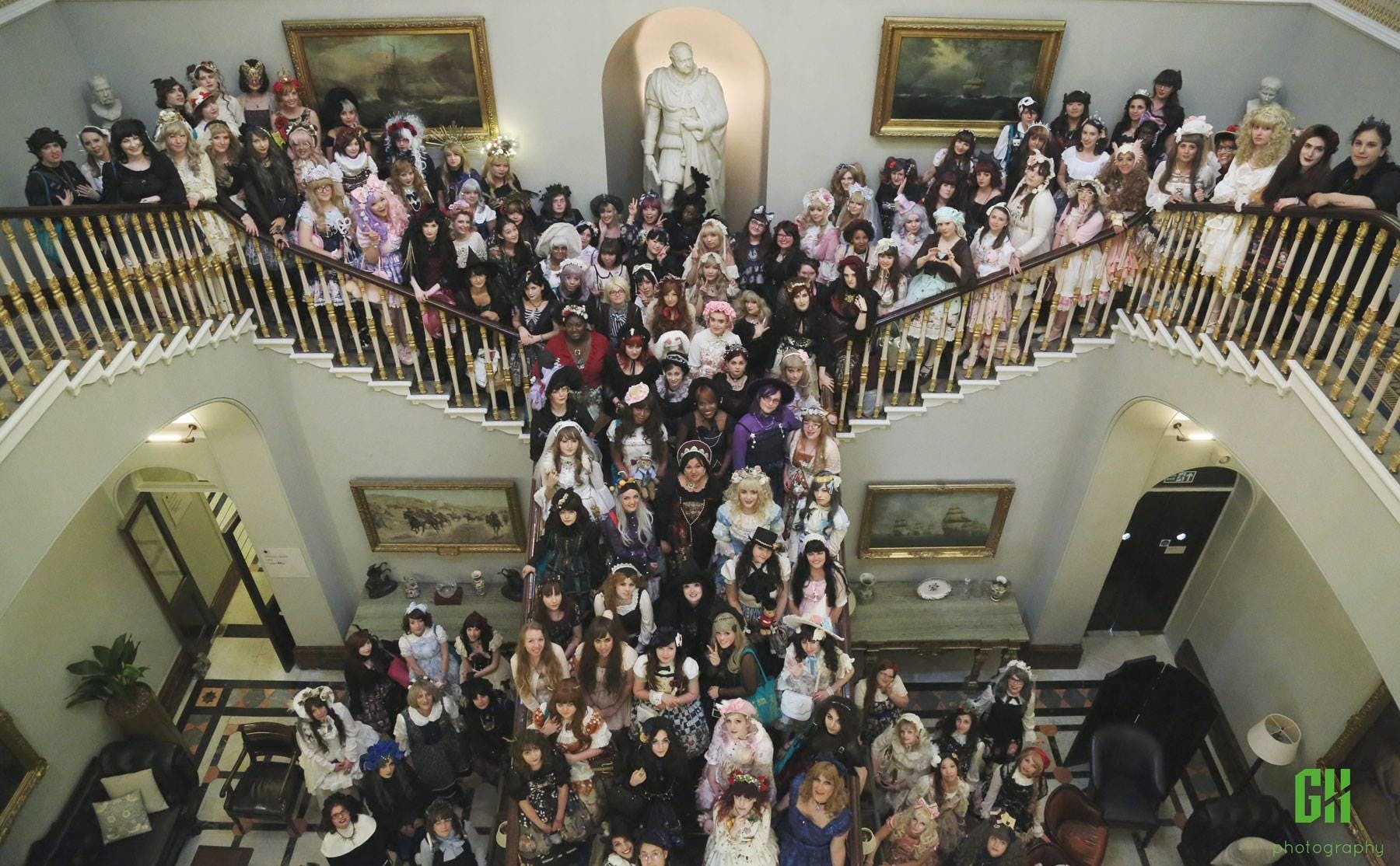 Baker at a Lolita meetup in London

After Baker reached out to the community and found out there was an upcoming meetup, she decided she would attend. She bought her first dress, which she refers to as her “ugly lace monster.” In those days, Lolita clothing was not as easy to import as it is today, so Baker had to improvise the best she could, wearing a little black dress with pintucks to her second meetup.

Baker’s career in business consulting lent the perfect background for her to plan an event for her newfound family. She organized the first Atlanta Lolita tea party, which has been an annual event ever since. This year will be her seventh. She says that ideally she would like to make the event bigger, extending it to surrounding states and welcoming more Lolitas into the fold. 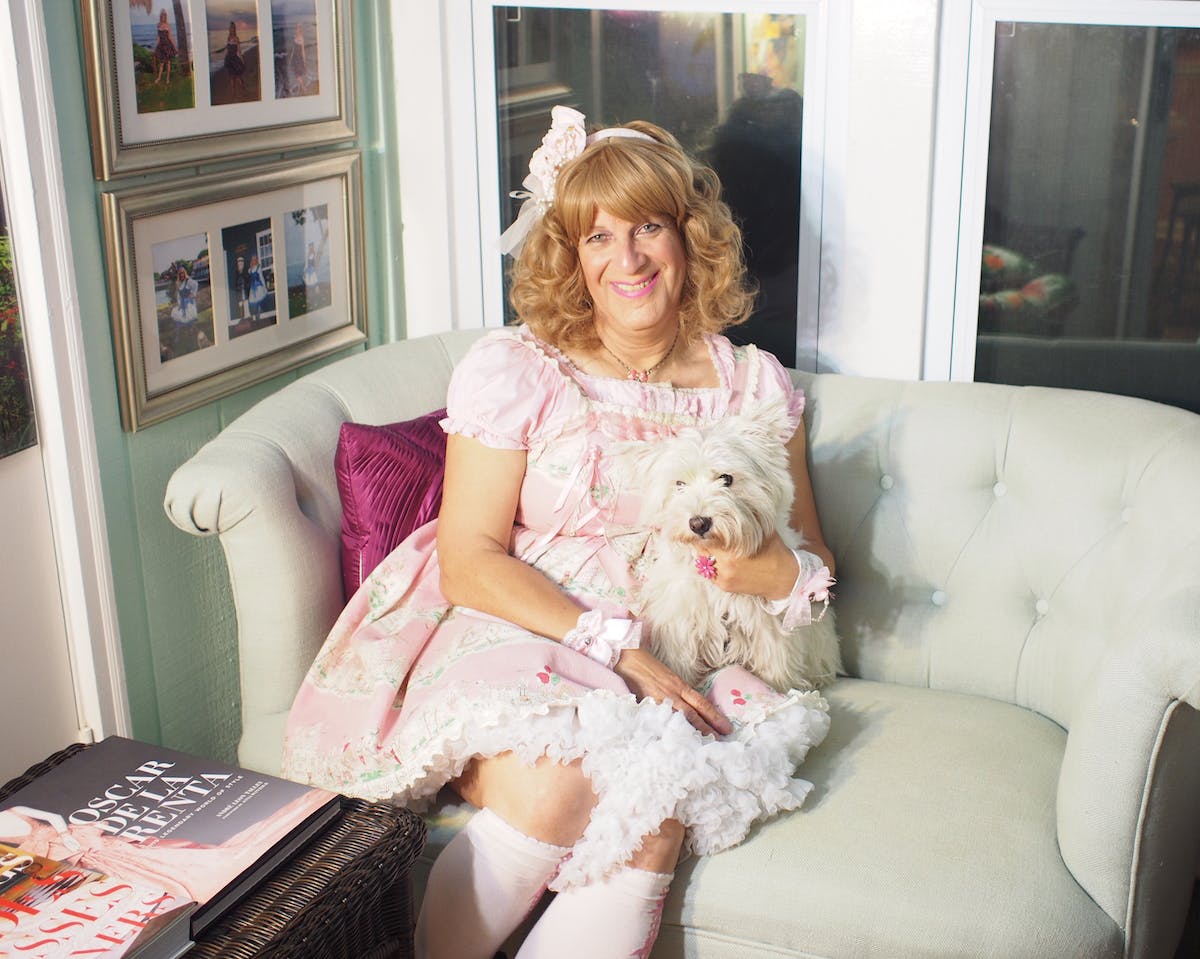 Baker in her reading nook with her dog, Sophie

Lolita fashion often draws criticism from those who confuse a correlation between it and the Vladimir Nabokov novel of the same name, assuming that since the fashion is girlish that there’s an element of sexual perversion present. Baker is no stranger to any of this criticism, but she takes it in stride.

“I’m sitting around with all these girls for the first time and they’re telling me about how difficult it is to wear Lolita in public, and I thought to myself, ‘Let me tell you what’s hard!'” Baker says, laughing. “It’s been a challenge. We’re all the same—we just want to be accepted for who we are.”

Baker—in her 40s—sometimes faces judgement from those who believe she is too old to be a part of a community that focuses on youth.

“It’s been hard,” she says. “Some people don’t get it. They’ll ask ‘Are you in a show? Are you in a play? Are you Little Bo Peep?’ Part of me doesn’t want to have to explain to everyone, like when I am with friends and someone says something. And there’s always rude people. But I don’t care. Physically, I think I’m doing pretty well. Women come in all sizes and shapes, and we all have certain assets that are our best features.” 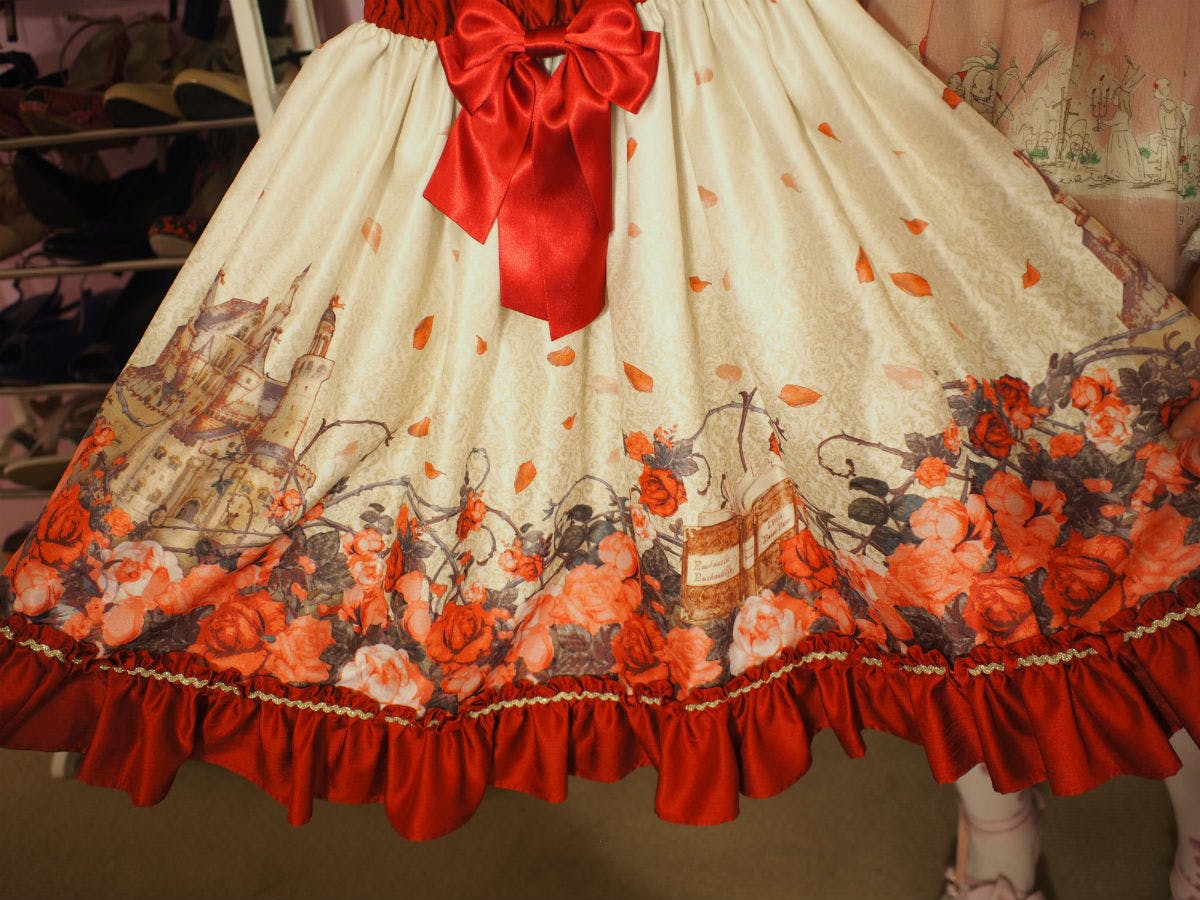 A better look at the details of a Lolita dress

In Lolita culture, Baker found who she really needed to be. As a trans woman, it was a crucial part of grasping her own femininity and expressing herself as a woman. In turn, she makes a point of welcoming new women into the community. By hosting the annual tea party and other events, she says, she can give back to the community and help new members come aboard.

“Often new girls will ask me, ‘Andrea, what should I do?'” Baker says. “I laugh and say, ‘Wear whatever you like and learn from everyone else.’ I started at the exact same place with the ‘ugly lace monster!” 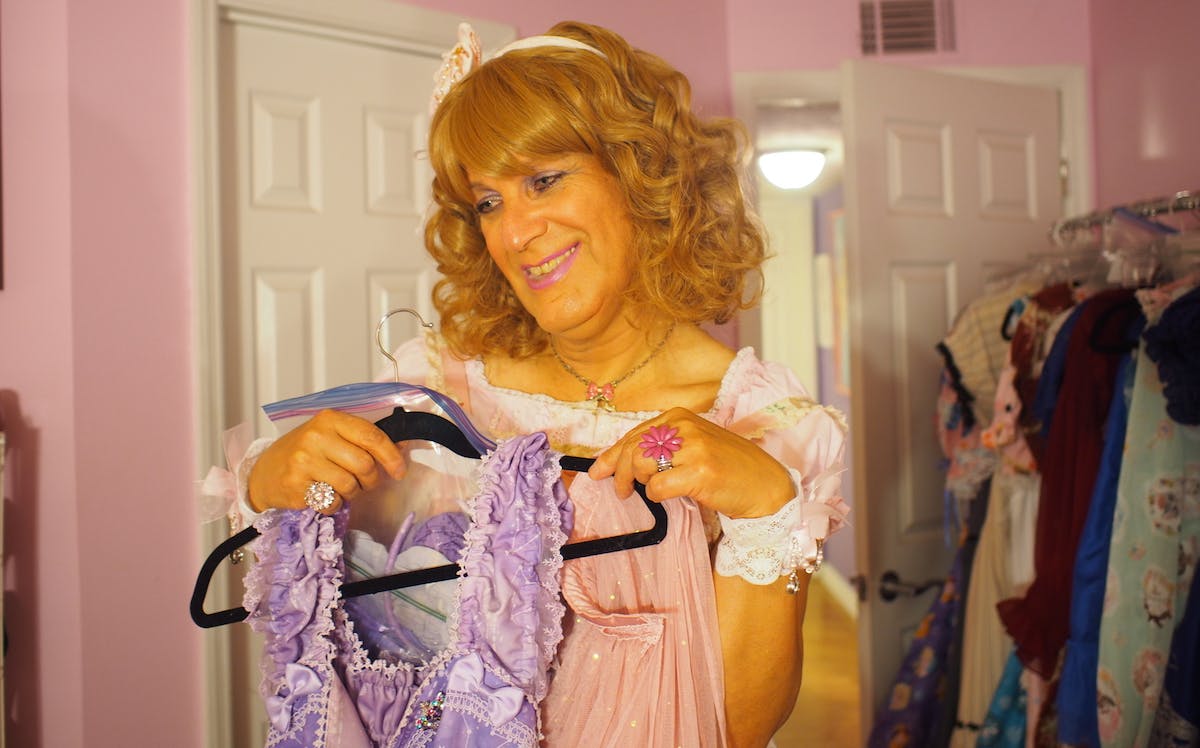 While the trans community has a strong focus on diversity, Baker says she finds the same in her Lolita circles. Younger members know that gender can be a very fluid thing.

“When I get bummed out by things, I remember these new generations are coming along that don’t have any of this baggage [about sex, race, and age],” she said. “It means so much.”

Baker’s social calendar for the rest of the year is already full. Her home is covered in photos of her in stunning locales all over the world, always wearing one of her Lolita dresses. In one taken in Hawaii, she stands with her mother, who accompanied her on a trip for two of her Lolita meetups.

“My mom is so happy for me,” Baker says. “She’s met the girls here too and she thought it was all amazing. One day she said to me, ‘Andrea, you should have been born a girl.’ And I said ‘Well, I was.’ I’m not a perfect person, I don’t have perfect features. But I’m one of the happiest girls in the world.”