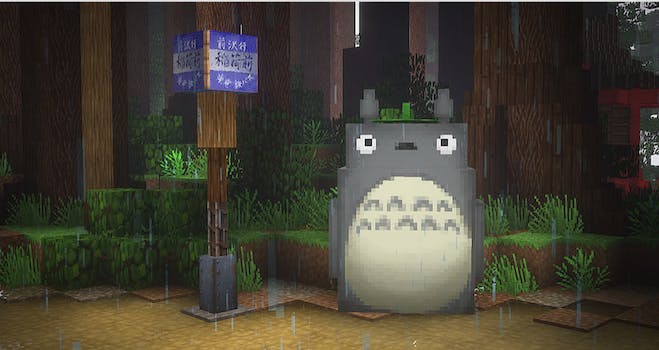 Fans of Hayao Miyazaki’s films have long been in love with his sweeping, fantastical settings. Unfortunately, they’re impossible to visit in real life (although certain rural parts of Japan may look awfully similar).

But thanks to one fan’s remarkable devotion, you can explore several of these incredible worlds in Minecraft—for free.

Animator and YouTube personality Alan Becker is behind the project, which is his second Minecraft recreation of a Ghibli film. The first was Spirited Away, which Becker completed with the help of volunteers in 2014.

“I started in 2011 with Spirited Away,” Becker told the Daily Dot. “I had just rewatched it and really wanted to be in the movie, so I started making it in Minecraft as accurately as possible so I could feel like I was in it. I worked on it solo for five years. Then this year, I opened it up so that anyone could apply to help, and my team grew to about 50 people, with seven of those being regional managers who assign jobs and manage the builders.”

It took Becker and his volunteers six months to build Totoro‘s lush rural world in Minecraft. He also credits his Patreon backers for the donations that made the project possible.

Becker says that his passion for recreating environments fits perfectly with Minecraft.

“I also enjoy refining our system so that tasks get distributed and completed efficiently, like a well-oiled machine,” he said. “I think the builders and I share a passion for these movies as well, and giving these builders a little bit of fame by putting their names in the credits makes me happy.”

Becker is on the lookout for builders to help him complete his next project, which just so happens to be Howl’s Moving Castle. He’s already posted progress videos about it on his YouTube channel, and it seems to be coming along quite nicely. He says that there’s no rush to finish the project, but he’s projecting another six months of work to do so at the least.

If you’d like to try out the worlds yourself, they can be downloaded on Becker’s website. Instructions on how to use them are here.