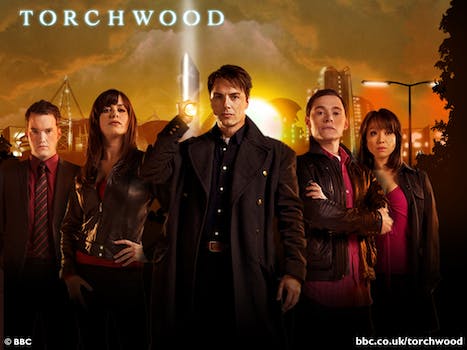 ‘Torchwood’ actor hints at show’s return as a radio play

Did John Barrowman just announce a new 'Torchwood' series? Or did he speak too soon?

Doctor Who spinoff Torchwood aired from 2006 to 2011 and gained a cult following in the process. There hasn’t been much talk of a reunion since the show’s partially rebooted fourth season, but this week actor John Barrowman revealed plans to bring the Torchwood team back for a series of radio plays.

At a press conference promoting his current role on the CW’s Arrow, Barrowman said that Torchwood showrunner Russell T. Davies was involved, and that they’ve discussed making three or four plays for BBC radio.

“My sister and I are discussing the possibility of writing one of them and whether or not that leads to something [on TV] ,” he said. “But I’m full-time with ‘Arrow’ now. It’s not a question of me not wanting to do it, it’s a question of the BBC wanting to do it or others wanting to do ‘Torchwood.’ I know the fans are out there so I think they’d be silly not to.”

He added that the people behind Arrow are Torchwood fans, and would allow him to take a break to work on the radio plays.

It doesn’t sound like anything has been officially confirmed yet, so we’ll take this revelation with a pinch of salt. However, Russell T. Davies has just finished with his most recent project, a trilogy of queer-themed dramas for UK TV Channel 4, and there’s already precedent for Doctor Who radio spinoffs. Big Finish Productions has been releasing Doctor Who radio serials for decades, often starring former Doctor Who actors like Paul McGann, Tom Baker, and Sylvester McCoy. Plus, radio dramas are on-trend right now, with the BBC recently airing an adaptation of Neil Gaiman and Terry Pratchett’s Good Omens.