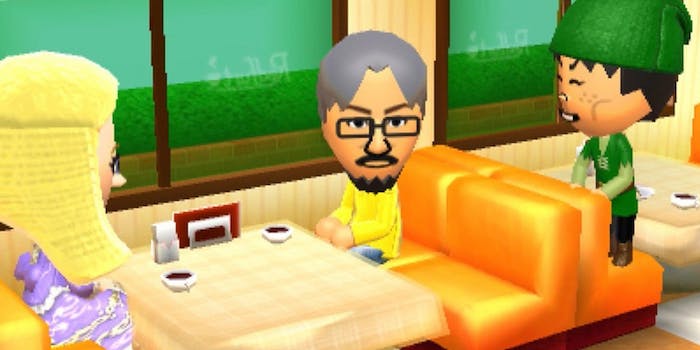 You can customize everything in ‘Tomodachi Life’ except who you love

Should Nintendo take a page from 'The Sims' when it comes to in-game relationships?

Nintendo’s new life simulator, Tomodachi Life, has a few gamers feeling left out and they’re appealing to Nintendo to fix it.

In the game, players’ avatars, also known as Miis, interact with each other in hilarious ways and go about daily life. It’s a mix between The Sims and Animal Crossing with crazy antics tossed in for good measure.

In Tomodachi Life, as in real life, relationships play a big role. Players can get married, have kids, and send those kids to other 3DS systems. The problem is if you’re playing as a male character, the game only allows you to form relationships with a female character.

Now some users are raising concerns about lack of inclusivity when it comes to same-sex relationships in the game. YouTube personality Tyeforce is pushing for a social media movement to bring what’s been dubbed “Miiquality” to Nintendo’s attention. LGBT gamers are often left out when it comes to in-game relationships, though some companies are trying to improve diversity. The goal of the Miiquality movement would be to either patch Tomodachi Life to allow gay marriages, or make the option available in future versions of the game. The movement does not advocate the boycott of the game, but rather it’s an appeal to Nintendo for more inclusivity. Tomodachi Life is set to launch in North America on June 6.

There is a kind of workaround to the Tomodachi Life’s relationship problem. Players can take a female character, and build her to look and dress like a male character. The game will then allow the marriage to take place. But, Tyeforce isn’t a huge fan of this approach, because it’s ultimately dehumanizing and fails to recognize gay relationships.

Nintendo as a company has historically tried to stay far away from controversy and wants to maintain a neutral, family-friendly image. It’s unclear how it will react to pleas to allow same-sex relationships in Tomodachi Life.

Bill Trinen, Senior Marketing Manager for Nintendo, told IGN it’s easy to assume that if Nintendo fails to add a feature in a game that it’s actually making a political statement, but that’s not really the case. “We’re not really saying anything about anything; we’re just constantly trying to create fun and entertaining experiences,” he said.

We reached out to Jack DeVries, a prominent video game journalist and gay rights activist, to ask him for his thoughts on the Tomodachi Life issue.

Why is it important for gamers to have same-sex marriage within Tomodachi Life?

Any life simulator game, even a wacky cartoonish one, should allow people to accurately simulate the life they want. I can customize literally everything about myself, except for which gender I’m attracted to, and that just seems silly in this day and age. Look at The Sims, which came out 14 years ago. They had same sex relationships straight out the gate. On a personal level, as a closeted high school student, The Sims actually had a pretty big impact on me. It sounds silly, but it was like this crystal ball where I could see myself in a happy relationship, at a time when I thought I would never have that. I don’t think people realize how huge of a deal that is for someone struggling to come out. We NEED examples of same sex relationships being portrayed as normal, because otherwise it’s hard to feel normal.

With a company as careful and conservative as Nintendo, do you ever see it embracing LGBT elements into their games?

I think it’s largely a cultural issue. Nintendo is a Japanese company, and the fact is that same sex marriage is not legal in Japan. Last I checked the government even made it pretty difficult for Japanese citizens to get a same sex marriage from another country recognized. That said, the culture is changing rapidly, and in just the last year the support for same sex relationships has increased pretty dramatically.

The other issue is the perceived “mature” nature of same sex relationships. Depictions of a man and a woman in love is deemed family friendly, but if it’s two girls people tend to label it more adult. There’s this resistance among some groups to expose kids to the concept of same sex relationships, which only further perpetuates the concept that being gay is somehow prurient by nature.

Tomodachi Life, and Nintendo as a company, has a great opportunity here to say, “Hey, look. Boys can like boys and girls can like girls and that’s normal, too.” It doesn’t have to be a big statement, just having it there makes a huge difference.

If Nintendo were to add same-sex relationships, how do you think it would be implemented?

The beauty of a game like Tomodachi Life, and any life simulator, is that having gay options in there are usually only noticeable to the people who care. If it works just like any other relationship in the game (and it should) then it would only come up if you were pursuing a same-sex relationship. Again, taking a page from The Sims, just have it be a normal option in the game, and if people don’t want to utilize it, they won’t. It instantly invalidates any complaints people seem to have about gay themes being “shoved in their face” or forced upon them.

Update: Nintendo apologized on Friday for failing to include same-sex relationships in its Tomodachi Life game, issuing the following statement. “We apologize for disappointing many people by failing to include same-sex relationships in Tomodachi Life. Unfortunately, it is not possible for us to change this game’s design, and such a significant development change can’t be accomplished with a post-ship patch. At Nintendo, dedication has always meant going beyond the games to promote a sense of community, and to share a spirit of fun and joy. We are committed to advancing our longtime company values of fun and entertainment for everyone. We pledge that if we create a next installment in the Tomodachi series, we will strive to design a game-play experience from the ground up that is more inclusive, and better represents all players.”

Photo by BagoGames/Flickr (CC BY 2.0)