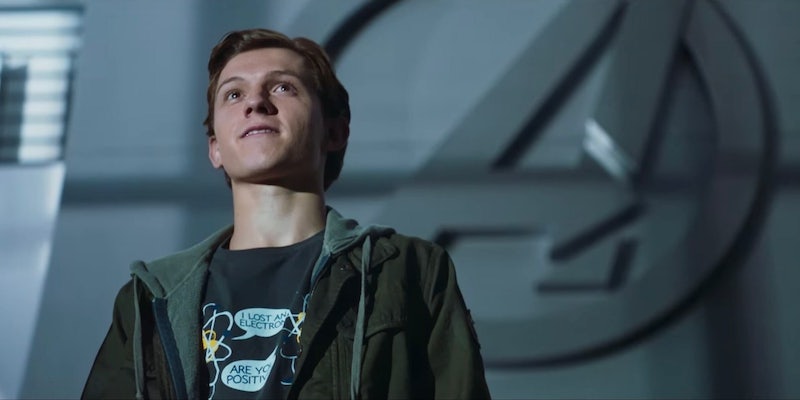 Tom Holland, the Marvel Cinematic Universe’s Spider-Man, is notoriously and reliably bad at keeping a lid on some of Marvel’s secrets, and he struck again after “leaking” the first poster for Avengers: Infinity War before Marvel was set to release it.

During an Instagram Live stream, Holland opened a package he received from Infinity War co-star (and fellow accidental Marvel leaker) Mark Ruffalo and showed it off to fans like he was hosting an unboxing video. Inside was the first poster for Infinity War, which didn’t feature any of the many, many characters appearing in the film but had hints of color in the now-recognizable Avengers logo.

It wasn’t until after Holland saw Ruffalo’s letter with a “CONFIDENTIAL DO NOT SHARE” message on the back that Holland realized he did it again.

While both Holland and Ruffalo have both gotten reprimanded by Marvel for sharing secrets, this particular instance is almost certainly staged. For one, the livestream is still on Holland’s Instagram account, and it plays into the narrative that Holland (and Ruffalo to a smaller extent) accidentally leaked confidential Marvel material yet again—making for a more interesting story than the simple release of the poster, which looks cool but might not spark much conversation.

Shortly after Holland’s video spread online thanks to fans capturing the video from Holland’s Instagram Stories, Marvel released the poster for real so fans could see it for themselves.

Marvel also released a proper teaser trailer—one designed to ramp up hype for Infinity War by featuring YouTube reaction video clips and not a frame of new footage—ahead of the first Infinity War trailer on Tuesday. Chances are, that one will probably be released without a hitch.