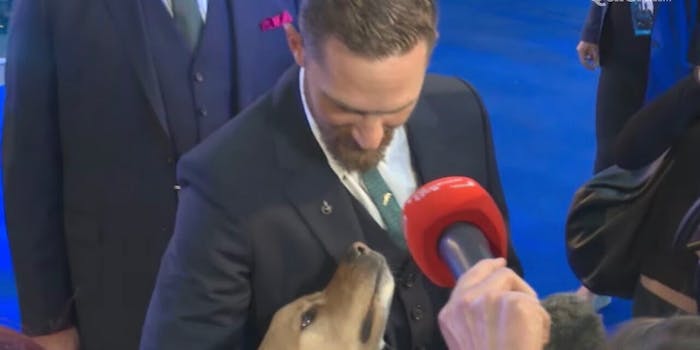 Tom Hardy penned a heartbreaking tribute to his dog, Woody

'Thankyou Woody for choosing to find us. We will love you and be with you and you with us forever.'

Fan favorite actor Tom Hardy revealed in a letter posted to his website this week that his beloved dog, Woody, had died.

Although Hardy’s incredible love of dogs has been well-documented over the years, his love for his own dogs is palpable. He has openly discussed his previous dog, Max, who died in 2011. Woody—a stray he rescued while shooting the movie Lawless—even attended red carpet premieres with Hardy, including in Peaky Blinders and a recent episode of CBeebies Bedtime Stories.

Woody, which is short for Woodstock, died this week at the age of 6 after a six-month battle with aggressive polymyositis, which affected his muscles. Hardy shared a written tribute with fans, which has been circulating on Tumblr. (Hardy’s representative has confirmed the letter is from Hardy.) While Hardy doesn’t normally open up about his friends and family—and Woody was both to him—he has seen how many people Woody has touched throughout his lifetime. Hardy opened up about the night he rescued Woody and some of the experiences Woody shared with him and his family over the years.

He was Far too young to leave us and We at home are devastated by his loss I am ultimately grateful for his loyal companionship and love and it is of some great comfort that he is no longer suffering. Above all I am completely gutted. the world for me was a better place with him in it and by my side.

To the bestest friend ever. To me and to a family who loved him beyond words and whom he loved without doubt more than I have ever known. Woody was the bestest of journey companions we ever could dream of having. Our souls intertwined forever.

You can read Hardy’s full tribute to Woody below.