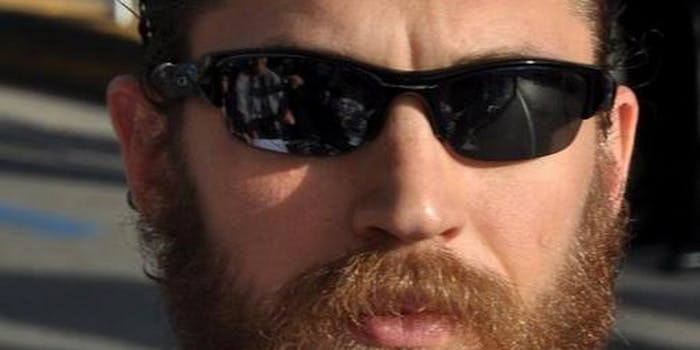 Tom Hardy isn’t willing to let your Punisher hopes die. The actor was just spotted on Dubsmash rapping to 50 Cent and keeping alive the rumors that he will score a role as the Marvel antihero.

Here at the Daily Dot, we’ve done our fair share of reporting on Hardy’s weird and wonderful existence. When he’s not headlining major blockbuster films, the A-list actor likes to unwind by taking shameless selfies, being dog’s best friend, and deconstructing gender roles.

Oh, and rapping. Hardy, who once had a contract as a rapper, drops beats whenever he can, rapping with his son in tow, rapping Shakespeare, and rapping at movie premieres.

It’s for this reason that Hardy and Dubsmash, the viral lip-syncing app, were made for each other. Hardy’s been playing around with the app off and on for the last few months, and he recently took it for a spin by lip-syncing to 50 Cent‘s “P.I.M.P.”

Tom Hardy is down with US, ITs the unit not Bad Boy LMAO #nopuffyjuice #EFFENVODKA #FRIGO #SMSAUDIO

We want to be on whatever groove Hardy’s riding. And yes, that cap he’s wearing bears the famous insignia of the Punisher, reminding us all that he’s well aware of how much the Internet wants him to play bulked-up super-soldier Frank Castle on screen.

True, Hardy seems to have already set up camp on the DC Comics side of the fence, first playing Bane, then briefly signing on for Suicide Squad, and now helming a production of DC imprint Vertigo’s 100 Bullets. But he’s made it clear that he’d love to play the Punisher, and Marvel does seem to be fond of hiring British actors named Tom.

As a bonus, here’s Hardy and a friend in March doing a dubsmash of The Hangover.

One thing is clear: If Marvel wants Hardy, they’ll have to take Tom Hardy, corny social-media king, along with Tom Hardy, serious actor.

We wouldn’t have it any other way.