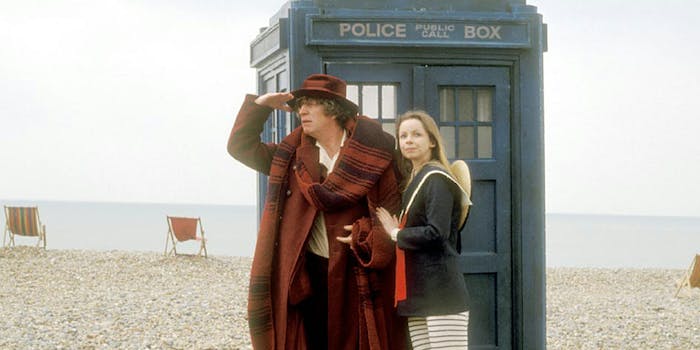 It's based on an idea that Baker first came up with in the 1970s.

Tom Baker, who played one of Doctor Who’s most iconic Doctors, is giving life to an old Doctor Who story that never made it to the big screen.

According to the Radio Times, Baker is penning a Doctor Who novel called Scratchman, which will star the Fourth Doctor battling the Devil. But the original concept of Scratchman is much older than that.

Scratchman was originally conceived by Baker and Ian Marter, who played companion Harry Sullivan, in the 1970s while they were making Doctor Who. In its original form, it was meant to be a film called Doctor Who Meets the Scratchman. It would’ve starred the Fourth Doctor, Harry Sullivan, and Sarah Jane Smith and would’ve had them encounter the Daleks, the Cybermen, the Scarecrows, Vincent Price and Twiggy, the Devil himself,  and the climax would’ve taken place on a massive pinball table. It’s an eclectic mix of legacy villains and completely random and chaotic elements.

Despite efforts to bring the story to life over the years, the film never happened; at one point, the script was lost. But now, more than four decades later, Baker is bringing his original idea to fans in a new form.

“When I was approached about the book, I thought, ‘Why not?’” Baker said in a press release. “I’m always on the lookout for a novelty. I’m very enthusiastic as I get close to darkness.”

An official synopsis, courtesy of the Radio Times, is included below.

What are you afraid of?

The Doctor, Harry and Sarah Jane Smith arrive at a remote Scottish island, when their holiday is cut short by the appearance of strange creatures – hideous scarecrows, preying on the local population. The islanders are living in fear, and the Doctor vows to save them all. But it doesn’t go to plan – the time travellers have fallen into a trap, and Scratchman is coming for them.

With the fate of the universe hanging in the balance, the Doctor must battle an ancient force from another dimension, one who claims to be the Devil.

Scratchman wants to know what the Doctor is most afraid of. And the Doctor’s worst nightmares are coming out to play…