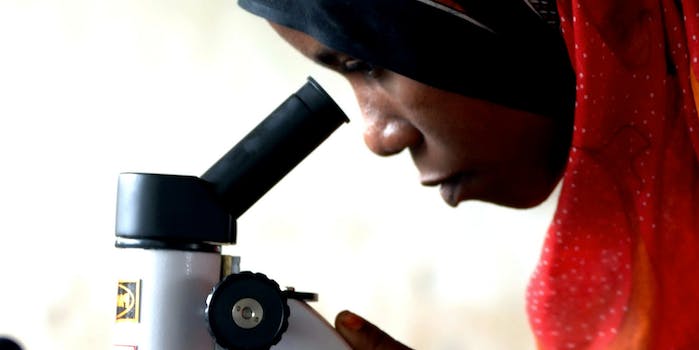 Nobel winner apologizes for ‘telling the truth’ about women in science

Maybe dishing out sexist remarks to a room full of journalists isn't the smartest idea.

Nobel-winning scientist Sir Tim Hunt told a room full of baffled science journalists this week that women should be segregated away from men in science labs because they were an emotional distraction.

His comments promptly caused a Twitterstorm and resulted in a repudiation from the British Royal Society, of which Hunt is a member.

Today, after his remarks were widely reported, Hunt paradoxically told BBC Radio 4 that he was “really sorry” for his statements, but also that he “meant to be honest.” He then went on to say that having to deal with people who “burst into tears” prevents scientists from doing their work.

Hunt received a knighthood as well as the Nobel Prize for Science for his groundbreaking work in understanding and battling cancer cells.

But earlier this week at the annual meeting of the World Conference of Science Journalists in Seoul, he repeatedly described women as unfit to work in science labs.

Hunt, who had been invited to speak at a special lunch for conference attendees, announced himself to all present as a “male chauvinist,” and proceeded to tell listeners the his problems with women in science.

He then went on to say that he’s in favor of segregated, “single-sex labs” because he doesn’t want to “stand in the way” of women.

Connie St Louis, director of the MA in Science Journalism at London’s City University, is a guest lecturer at the conference. She summarized Hunt’s comments on Twitter.

St Louis’ summary of Hunt’s comments was supported by other journalists on the scene, including Retraction Watch cofounder Ivan Oronsky and Pulitzer Prize winner Deborah Blum, and later verified as accurate by Hunt himself:

Yes, he said, women cry too much when criticized. And at a lunch hosted by women scientists. Swear to God. https://t.co/feZtZ4hRPp

Thinking that Hunt might have been joking, Blum confronted him about his remarks. Instead of laughing it off, she said, he only expanded his comments:

@ElaineDowns1 @AdamRutherford I asked him about it directly the next day. And he said it again.

@AdamRutherford Yes, I was hoping he'd say it had been a joke. But he just elaborated. Sigh.

@ElaineDowns1 @AdamRutherford He did tell me that he thought I might hold up okay because I didn't seem the crying kind.

Hunt’s remarks quickly drew criticism and reactions, both from the wider Twitter community and from those in attendance. At a conference which has explicitly included multiple panels addressing women’s issues in science, science journalism, and social media, Hunt is an obvious outlier. A webinar devoted to “persevering in science” swiftly removed Hunt as a panelist:

@SuperScienceGrl @deborahblum @biocuriosity – Tim Hunt will not take part in the webinar. The invitation has been withdrawn.

@gingerpin @deborahblum @biocuriosity Well, thank you for that. Those attitudes = top reason someone like me might not persevere in science.

The Royal Society also distanced itself from Hunt’s remarks, issuing a statement on its blog titled “Science needs women”:

The Royal Society believes that in order to achieve everything that it can, science needs to make the best use of the research capabilities of the entire population. Too many talented individuals do not fulfil their scientific potential because of issues such as gender and the Society is committed to helping to put this right.

Speaking to BBC Radio 4 about the incident, Hunt simultaneously apologized and stuck by his statements:

I’m really sorry that I said what I said, it was a very stupid thing to do in the presence of all those journalists. What was intended as a light-hearted, ironic comment apparently was interpreted deadly seriously by my audience. But what I said was quite accurately reported.

It’s terribly important that you criticize people’s ideas without criticizing them, and if they burst into tears, it means that you tend to hold back from getting at the absolute truth. Science is about nothing except getting at the truth. And anything that gets in the way of that diminishes, in my experience, the science. I mean I’m really, really sorry that I caused any offense. That’s awful. I certainly didn’t mean—I just meant to be honest, actually.

@virginiahughes @roseveleth So basically he's saying : "I'm sorry you are bunch of crybabies that want to sleep with me."???

While it’s easy to see his views as outdated, women in science and science journalism routinely feel the effects of systemic sexism on their work. In April, research into gender disparities among post-doctoral scientists was ironically rejected for publication by a peer reviewer who told the two scientists leading the study that they needed to have a male coauthor. The reviewer also suggested, among other biased observations, that the results of the study might be skewed because men simply did better academic work than women.

Hunt’s remarks may be outspoken, but they’re clearly not isolated.

Update 3:55pm ET, June 10: The University College London, of which Hunt was an honorary professor on the faculty of life sciences, has announced today that in the wake of his comments Hunt has resigned his position.

The University clarified that “UCL was the first university in England to admit women students on equal terms to men, and the university believes that this outcome is compatible with our commitment to gender equality.”