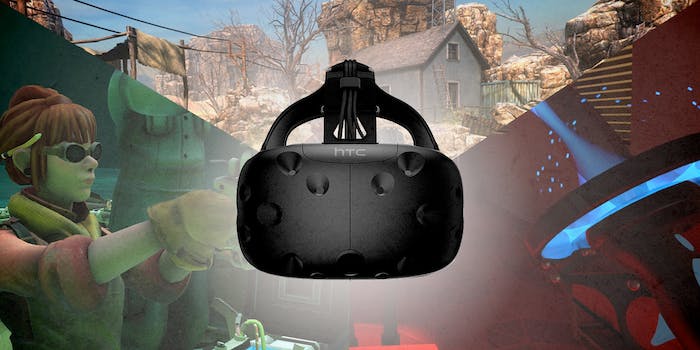 How to make one of gaming’s most venerable genres work on gaming’s newest hardware.

You may think you’re a badass when you play first-person shooters, but could you actually shoot a gun or dodge a bullet?

The virtual reality action shooters Arizona Sunshine and Hover Junkers, and the stealth game Budget Cuts, all of which I played at the 2016 Game Developers Conference, will be the centerpieces of every core gamer’s HTC Vive library.

They’re the games that will have you jonesing to visit your friends who own a Vive and make you start measuring space in your living room to see if you have room for one of your own.

Of all the classic game genres to port into VR, shooters may be the most problematic. Shooter players for decades have been trained to use joysticks to look around and aim weapons. On the Oculus Rift and PlayStation VR you’re using a traditional control pad most of the time, so while aiming might be screwy at least moving around in a VR shooter on those platforms is essentially the same as it ever was.

It’s worth developers’ time to step up to this challenge. There’s something about actually aiming and firing your weapon, kneeling to duck behind cover, and being able to stand back-to-back with another player in virtual space while you hold the line, that makes you feel more like a badass than any traditional shooter, even those that incorporate a seated VR peripheral.

“I thought you were covering my six!” I complained, after turning around and finding a zombie up in my face. Richard Stitselaar’s avatar, a disembodied face and a pair of hands holding a pair of pistols, turned its palms up as if to say, “I’m sorry.”

In the real world Stitselaar, the developer of Arizona Sunshine, was standing in a separate room from mine in Valve Software’s booth at GDC. In virtual reality, however, Stitselaar was standing with me in a shallow canyon in Arizona, in what looked like the middle of the summer.

Wooden crates were spread out around us, on top of which ammunition magazines for our pistols and Uzis spawned between rounds of zombies shambling and running towards us from multiple entrances to the canyon.

The best anyone had done that day was surviving to wave 27. Stitselaar and I made it to wave 15. It didn’t help that I had accidentally pulled the cord for my headphones out from the back of the Vive rig halfway through the fight and lost my sound. And unfortunately the demo was only 15 minutes long, which left no time for a second try.

I could have used another round, if for nothing else than to learn how to properly load myself up with ammo. I was supposed to grab clips off the wooden crates and hold them close to my body to attach them to my belt. Instead, I kept inadvertently dropping them. A pile of 50 or so full magazines were piled up around my feet, when the match ended.

Arizona Sunshine is still in development, but even with such a short demo the potential for a new dimension in cooperative shooter play was obvious. One thing you usually can’t do in a traditional FPS game is to aim your weapon in one direction and look in another. In Arizona Sunshine I was doing so the entire time, lining up a headshot and then, while pulling the trigger, looking around to acquire my next target.

Imagine being in a VR space with a friend you’ve been playing cooperative shooters with for a decade, calling out enemy positions, telling each other when you’re reloading and need some extra cover, and deciding where you’re going to fall back or advance, reacting as quickly as your head can turn and your body can move.

It’s the falling back and advancing—radically changing your position within the simulation—that poses the largest problem for VR shooters. No matter how wide that canyon looked, in the real world I was surrounded by walls. Every so often as I moved back and forth to aim a shot, a bright blue wall of squares lit up next to me as the Vive’s Chaperone system warned me where the wall was, so I wouldn’t crash into it.

Budget Cuts, the Vive game in development by Joachim Holmér, is more of a stealth game than a traditional FPS, but calls upon the same set of skills for success. It also showcases just how odd it can be to move around a large space in VR.

In Budget Cuts, you’re sneaking around an office building after hours. The building is patrolled by robots that will shoot you on sight. What’s awesome about Budget Cuts is that you’ll find yourself peeking around corners, popping your head up from behind counters, and leaning over railings to see where the robots are and whether you have time to move without being seen.

The corners, counters, and railings aren’t real, of course. You’ll phase right through them if you try to move through them, but your brain is easily fooled, especially if you’re busy trying to avoid being seen by killer robots. You are unlikely to break the illusion that the surfaces are real because it’s in your best interests not to linger by any of them. You duck around the corner, and quickly duck back.

When you toss a throwing knife you’re actually cocking the blade back, extending your hand, and releasing the SteamVR controller’s trigger. When objects behave like your mind expects them to it compounds the illusion. Budget Cuts is as compelling a stealth game as Metal Gear Solid or Assassin’s Creed, only you never need to worry about not being able to stick to or get out of cover.

Where Budget Cuts gets weird, however, is when it comes to movement. Like all Vive games you can move freely within a limited area, but that doesn’t help if you need to walk down a long hallway. The game addresses this by letting you shoot a little ball of light from one of your controllers, and when it lands, it creates a portal you can step through.

Arizona Sunshine has a similar system for movement. You project a circle onto the ground, and then teleport to that location. Budget Cuts helps cover up the strangeness of this sort of movement by having you virtually step through portals, even though you’re actually standing still. This sort of long-distance movement is the biggest problem VR shooters need to figure out.

Unless, of course, you figure out a way around the problem, which is what Brandon Laatsch, founder of the development studio Stress Level Zero, has done with his company’s Vive shooter game Hover Junkers.

Of the three Vive shooters I demoed at GDC, Hover Junkers is the closest to release. It will be ready for Vive customers when their rigs show up in April.

Hover Junkers’s aesthetic screams Borderlands, from the title fonts to the design of the weapons to the ramshackle hover platforms from which players fight. And the titular hover junkers are what make the game such a fantastic demonstration of how shooters can adapt to VR.

A best practice for VR design, as demonstrated brilliantly by Owlchemy Labs’s VR game Job Simulator, is to limit the player to a small area of free movement by surrounding them with a tight environment. Again, the brain is very easy to fool. When surrounded by an office cubicle and given a series of tasks to accomplish there, your brain usually accepts that the cubicle is “real,” and so you don’t attempt to step through a desk or cabinet.

The action in Hover Junkers takes place on a platform on the back of your floating hover vehicle, an enclosed space that functions like a cockpit. A welding-tool type machine plugs into the ignition on the dashboard, and you pull the trigger to give the vehicle some boost. Looking around controls the steering, and a holographic half-sphere above the ignition functions as your radar.

When you see red on the radar, that’s another hover junker heading your way, and it’s time to get ready to fight. The welding tool can be used to move armor plates around the edges of the cockpit, so you can rearrange your cover however you need based on where you position yourself relative to another hover junker.

In my demo, I had two weapons to choose from: a revolver or a three-barrel shotgun. If there was aim assist, I certainly couldn’t tell. I suspect not, as I was a terrible shot, and that meant I did a lot of reloading.

When reloading in a shooter is fun for its own sake, you know the developers are on to something. Opening the chamber of a revolver or shotgun in Hover Junkers is accomplished by pressing the touchpad at the top of the SteamVR controller.

It feels fantastic. Ducking behind cover, moving around armor plates to different positions, and quickly reloading your guns calls on an entirely different set of reflexes and spatial awareness than any two-dimensional first person shooter demands.

Hover Junkers is the best-in-class shooter I’ve played so far on the Vive, because it successfully addresses the question of movement. The cockpit is just large enough to allow for some freedom of movement, but not so large that you couldn’t draw the footprint of the space within a medium-sized living room. That means you probably won’t get taken out of the experience by coming close to hitting real-world walls (triggering the bright-blue warning squares of Vive’s Chaperone system) in Hover Junkers.

When the Kickstarter for the Oculus Rift was first announced, I swore up and down that shooters could never really work in VR. Arizona Sunshine, Budget Cuts, and Hover Junkers proved me completely wrong, because they add room-scale solutions to the mix.

It won’t be lack of software that keeps VR from taking off. The sooner HTC and Valve can make games like Arizona Sunshine, Budget Cuts, and Hover Junkers accessible to core gamers by whittling down the high cost of the Vive and the PC powerful needed to run it, the sooner VR will become just another part of the core gaming landscape.