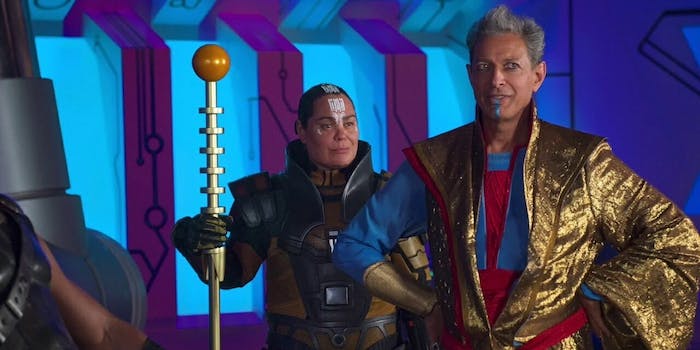 Jeff Goldblum returns in a just-revealed deleted scene from Thor: Ragnarok, making you wonder: Why delete that scene at all?

The scene takes place toward the end of the movie, with Thor and Bruce Banner having an awkward heart-to-heart on their stolen ship. They’re interrupted by a hologram of the Grandmaster (Goldblum) having a sensual experience with a couple of tentacles. Honestly, that’s exactly the kind of material we’d expect from the combined creative talents of Jeff Goldblum and Taika Waititi. And just in case that isn’t enough, there’s a hilarious gross-out moment that we won’t spoil before you watch the clip.

Exclusive: Get a first look at one of the deleted scenes from the upcoming #ThorRagnarok home release. It’s just as weird and delightful as you’d hope: https://t.co/1kuI0zNU7e @ThorOfficial pic.twitter.com/FqrLHxGSuD

Revealed by Entertainment Weekly, this is one of several Thor: Ragnarok deleted scenes that will appear on the film’s home release. It’s available digitally on Feb. 20, and on DVD/Blu-ray on March 6.