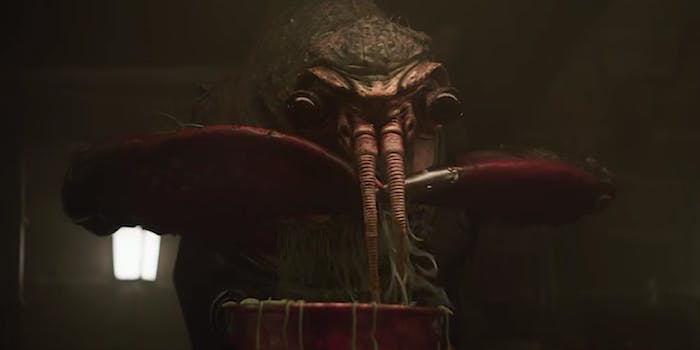 Therm Scissorpunch is the best new character in ‘Solo: A Star Wars Story’

Thanks to a marketing agreement between Disney and Denny’s, we got some fresh insight into Solo: A Star Wars Story last week. A new Denny’s ad features Han and Lando playing cards in a cantina, although this cameo actually distracted from the most exciting new revelation. We’re talking, of course, about Therm Scissorpunch.

First name, Therm. Last name, Scissorpunch. This new alien appears on a set of Solo trading cards, and you can see him briefly in the Denny’s commercial, slurping down a bunch of space noodles. Therm looks kind of like an angry grey lobster wearing a leather upholstered car seat. He also has the best name in the known universe.

It’s come to our attention that some people are making fun of Therm’s incredibly cool name, proving that sometimes, Star Wars fans just don’t know what they’re talking about. Inventive names are a core element of the franchise, ranging from poetically catchy (Poe Dameron) to downright ridiculous (Elan Sleazebaggano, a drug dealer in Attack of the Clones).

Admittedly, we probably dodged a bullet when George Lucas wasn’t allowed to use the names Darth Insanius and Darth Icky. But he did give us the delightful Salacious B. Crumb.

If we’re going to complain about any name in Solo, let it be Lando’s droid sidekick L3-37. Phoebe Waller-Bridge is an exciting casting choice, but why name her character after leetspeak? Along with feeling as outdated as a Nyan Cat joke, pop culture references don’t belong in Star Wars. The Force Awakens and The Last Jedi got away with naming obscure background characters after Beastie Boys songs (Ello Asty and Slowen-Lo), but only because they weren’t recognizable. It’s meant to be a galaxy far, far away from Ready Player One-style callbacks. A place where people can very legitimately call themselves Therm Scissorpunch—clearly the best new character in the movie.