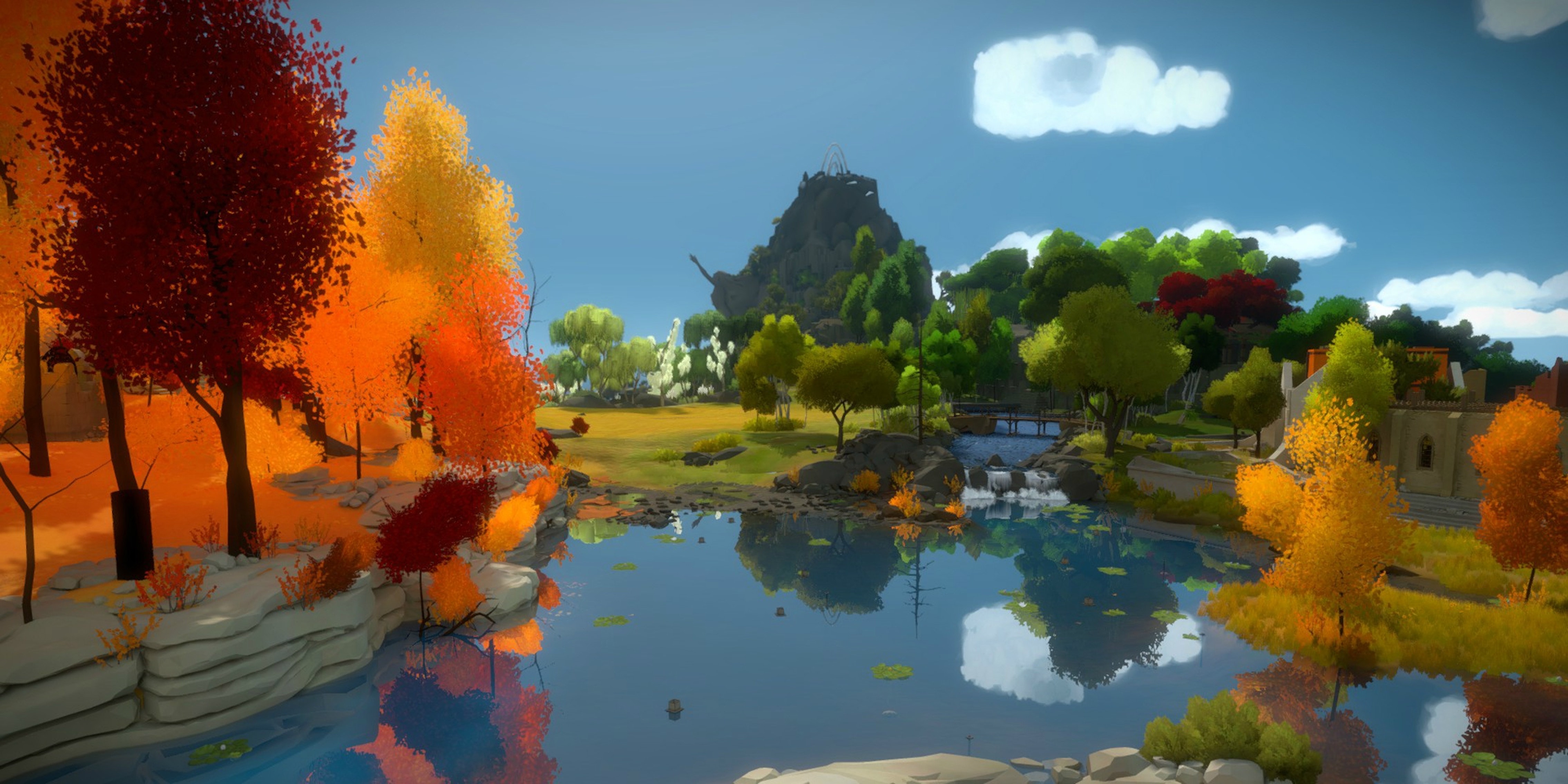 Anyone with low frustration tolerance should probably avoid The Witness.

If you don’t like beef, can you give a fair review to a steakhouse?

I’ve been plagued by this question while reviewing The Witness, the second high-profile puzzle game from indie developer Jonathan Blow, because while I can play puzzle games, with a few exceptions like the Portal series I don’t usually enjoy them.

There are more than 500 puzzles in The Witness. I’ve only beaten 79, mostly because The Witness for me was so diabolically difficult I often couldn’t take the game for more than 15 minutes at a stretch before having to get up and walk away or risk getting angry. To a point, that may be all the praise a puzzle game needs.

What kind of challenge a puzzle game represents has everything to do with whether I can enjoy it or not. And while the appeal of any game depends on individual preferences, I think this is more true for The Witness than any game I’ve played in the past five years. 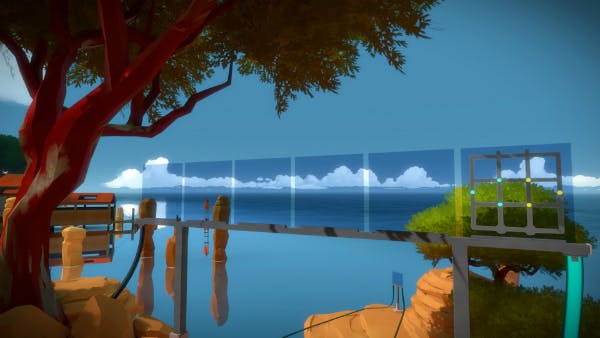 The Witness is a deliberate homage to the 1993 puzzle game Myst, in which you picked up a magic book and found yourself marooned on an island that is defined by its eccentric architecture. There’s not a wisp of backstory in The Witness, however. You walk through a tunnel, step through some doors, and are deposited upon an island.

The eccentricity of the island in The Witness is also defined less by architecture and more by the arrangement and variety of biomes. A forest with pixie-pink trees sits in the center of the island, and runs into a fall forest of bright orange leaves and a spring forest dominated by deep, dark greens.

On one side of the island is a desert beach, next to an area that looks like it was pulled from the American Southwest. There’s a quarry cut from white rock near a beached oil tanker that’s broken into three pieces, covered in decades of rust. It rests next to a swamp filled with trees that stand atop nests of exposed root systems.

The island is gorgeous. I could spend hours walking around, looking to compose the perfect screenshot.

A waterfall cascading from a column of rock looks so pretty and sounds so real I could see it as a museum exhibit, projected on the wall of a huge, white room with a wood bench to sit and admire the spectacle.

Also spread across the island are pits and elevator shafts that look down into a basement level that’s still under construction. You can see the tops of the elevator cars and wooden scaffolds, and in a few places you can descend a staircase and take a glimpse at whatever was being built down there. You’re barred from further investigation by locked, metal gates.

Woven into this island of purple-flowered bogs, crumbling miniature castles, and lush mountain caves are pieces of high technology. There are stacks of black hexagons that hum like generators, a device that looks like some sort of trans-dimensional portal, and most predominantly the touch-screen puzzle panels behind which your access to the island is locked.

You’re given every reason to want to understand what the hell is going on on this island. Surely there’s some science-fiction-esque explanation to what it is, where it comes from, and why you are there.

No answers are forthcoming until you manage to solve enough puzzles, however, and I’m certainly not going to be able to figure out the mystery of the island unless I turn to craftier puzzle solvers on YouTube for some help. 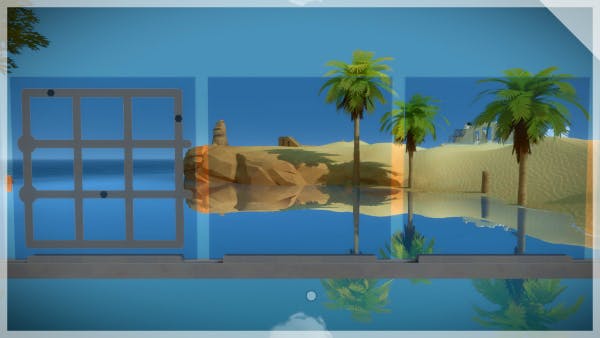 The puzzles in The Witness are mazes. You have to touch the screen at a designated start point and then trace a line until you reach the end of the maze. Generally speaking when you finish a panel or set of panels an attached power line will start to glow. By following the wire you discover the next set of puzzles.

The goal is to figure out what the rules are for each set of puzzles. For instance, in one set the rule is that you must pass your line through every hexagon that appears within the maze before reaching its end. Your line may never cross over itself, and that’s what makes the puzzles tricky.

Often the panels are laid out side by side, so when you finish one panel, the next panel lights up, until you reach the end of the row. Usually the solved puzzles remain lit and become a reference for trying to solve the next panel.

Sometimes you have to complete the puzzles in chains, and if you fail a panel, it will snap closed (as will all the preceding panels), and you’ll have to start all over again. If you don’t have the type of mind that readily remembers graphs or charts, you may have to take a picture or screenshot of each completed panel and scroll through them on a second screen to have the solutions available for reference. It’s an adaptation necessitated by the game suddenly becoming less accessible than it was before. And this rolling question of accessibility may become the heart of your experience with The Witness. 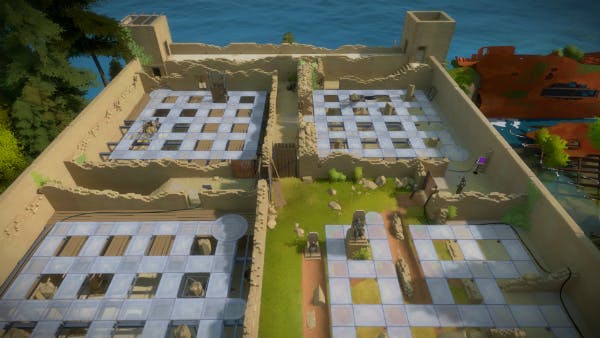 The recurring problem for me with The Witness was how poorly it sometimes seemed to explain why a correct puzzle solution was correct. You solve puzzles by figuring out their syntax, which becomes even more important when you are presented with strings of puzzles that are riffing off the same rule.

What happens if you solve five out of six puzzles, get stuck on the sixth puzzle, look back at your string of successes, and can’t determine what it was you got right before that you are getting wrong now?

Without that connective tissue between past successes, puzzle strings based on a shared syntax can be difficult to figure out. This may come down to how I process visual information. If the syntax was right there in front of me, I failed to see it.

Even when I managed to stumble on the correct answer to a panel and finished a puzzle set, I couldn’t always explain what I’d done, and that’s not very satisfying.

Intuitive puzzle solution, which relies in part on trial-and-error, is part of The Witness’s design. When I just threw potential solutions at a puzzle until I happened upon the right one, there may have been a brief epiphanic moment, but intuition isn’t about being smart.

It’s unconscious. It isn’t replicable at will. Those epiphanies were fleeting and ultimately illusory. 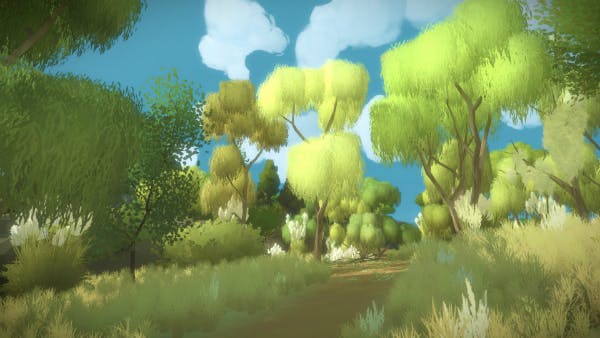 The island is broken down into distinct biomes to give the player a clear, visual cue. If you get stuck on one set of puzzles, you can find another location to try a different set. This is intended as a way to alleviate frustration.

I know from conversations with colleagues who have beaten The Witness that one can divvy the island up into areas of relative difficulty. The puzzles in certain biomes teach basic principles that play into the syntax of more advanced puzzles in other biomes, which effectively translates to, “There are certain parts of the island you should not go to at the beginning of the game.”

In other words, some of those biomes that were clearly marked as places for me to go to when I got stuck turned out to be entirely wasting my time. But The Witness doesn’t care if my time is wasted or not. It wants to be open-world and refuses to compromise from that identity. I respect that. All games do not have to be all things to all people. 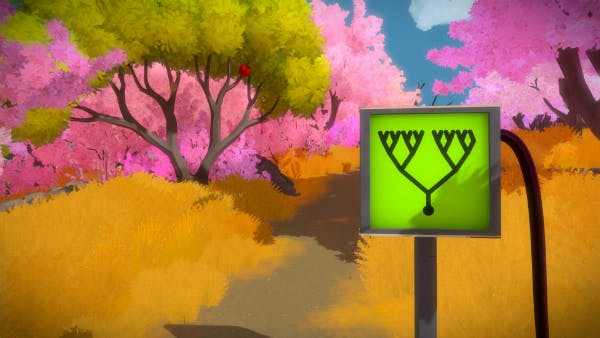 I read a spoiler for one set of puzzles that gave me a single clue that unlocked the entire set. I still had to figure the individual puzzles out by shifting my perspective and observing the environment, but rather than feeling like that set of puzzles had been ruined for me, I felt relief.

My need for forward progression is ultimately more important than my need to feel clever, and that seems to be the clearest demonstration of how The Witness wasn’t designed for me. It is designed to allow you to get stuck.

I’m not upset about how inaccessible so much of The Witness felt for me. I feel sad, because I think The Witness is an experience a lot of people are going to enjoy figuring out, whereas I’m going to need more hints to get through it.

I also can’t be upset about how hostile The Witness often felt, because the game taught me a lesson that was worth the pain—about how intimate puzzle games are. I think they represent a more direct relationship between creator and participant than most genres, and that’s an aspect of puzzle games that I’ve never really appreciated before.

Disclosure: Our Steam review copy of The Witness was provided courtesy of Thekla, Inc.

Illustration via The Witness