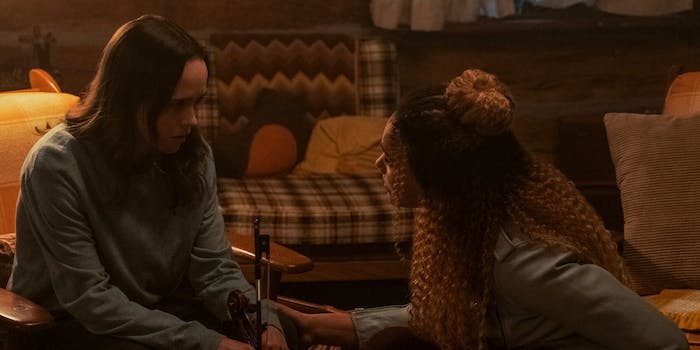 ‘The Umbrella Academy’ does its female characters dirty

When they're not forced to bear men's emotional baggage, they're getting the shaft.

Warning: This article contains spoilers for The Umbrella Academy, both season 1 and the comic book series.

The emotional baggage of the Hargreeves family—the seven children who were adopted by Sir Reginald Hargreeves—in The Umbrella Academy’s first season is ever-present. Number Five (Aidan Gallagher) became a killing machine and has lived a lifetime in a post-apocalyptic world, and he’s now hellbent on stopping it. Luther (Tom Hopper) stayed loyal to his father, and it nearly destroyed him. Diego (David Castañeda) is in constant competition with his brother and is keen on being a vigilante. Klaus (Robert Sheehan) is haunted by ghosts—literally.

Allison (Emmy Raver-Lampman) and Vanya (Ellen Page) are weighed down and shaped by their own trauma too; in fact, as season 1 reveals its hand leading into the final episodes with a divisive strike, it’s at the epicenter of the impending apocalypse. But to get there, it takes nearly a full season of dealing with the baggage of their male counterparts. And it’s a position that many of the show’s female characters find themselves in, often to the show’s detriment.

The Umbrella Academy, which is based on Gerard Way and Gabriel Bá’s award-winning comic book series, shook up and updated plenty of aspects of the source material ahead of its Netflix debut. The series’ timeline was pushed to present-day (but still kept some of its retro vibes), putting the Hargreeves’ birthdate at Oct. 1, 1989. The cast is more inclusive than their comics counterparts, and with 10 episodes instead of a handful of issues, there’s more room to explore and expand those roles—but the downside is that it can lead to some of the same pacing issues that have plagued many of Netflix’s other shows.

The show added more characters to the mix, including Eudora Patch, Diego’s ex-partner at the police academy; and the mysterious Handler (Kate Walsh) who’s in charge of much of the Commission (aka the organization tasked with preserving the timeline). It gave us more insight into Hazel (Cameron Britton) and Cha-Cha (Mary J. Blige), the time-traveling assassins tasked with killing Five; and Grace, the robot that all of the children called Mom. But more often than not, they’re the ones doing all of the emotional labor before being discarded off to the side.

Allison and Vanya, like the rest of their siblings, were all born on the exact same day to women who weren’t pregnant at the start of the day. They were raised by Reginald Hargreeves, a cold, calculating, and emotionally abusive man who trained them but also manipulated and experimented on them. By the time we meet them, we see just how their father’s ruthlessness has warped them: Although she has a wildly successful career, Allison lost custody of her daughter while Vanya is crippled with the kind of self-doubt that came from a lifetime of being told she was ordinary. Too bad the larger focus of the season is about their relationships with men.

Throughout season 1, Allison barely has a moment to herself. When she isn’t fighting Hazel or Cha-Cha, she’s trying to reform a connection with Vanya, being Luther’s emotional support as they tiptoe around their own pseudo-incestual relationship, or worrying about her daughter (who she lost custody of in her divorce). She isn’t given the space—until much further in the season—to reckon with how her abilities have shaped and harmed her life. She has no idea how much of it is real and how much of her life is because of her ability to make any lie come true. She even swears off using her powers and makes a conscious effort not to use them.

Vanya, on the other hand, grew up with the belief that she’s perfectly ordinary compared to her superpowered siblings. She’s withdrawn, anxious, and isolated, even more so after she wrote a tell-all book about her family. When she meets Leonard, a guy who would normally set off red flags for most people and is basically Syndrome from The Incredibles, she’s drawn in. When he isn’t trying to manipulate Vanya—which includes him stealing all of her meds, throwing them out, and then persuading her to stay off them—or trying to get her to uses his powers, he’s essentially treating Vanya like his therapist.

Vanya and Allison’s strained relationship is often in the background as season 1 follows Five’s push to stop the apocalypse up until the show’s breaking point. In the eighth episode, “I Heard a Rumor,” Allison finally tells Vanya the secret she had been harboring this entire time: Fearing what she could do, their father had Allison use her powers to convince Vanya that she was only ordinary. Vanya lashed out and sliced Allison’s throat in response.

The act, which effectively renders Allison’s powers useless—she’s silenced and loses the ability to speak because of it, which puts her in Vanya’s position—becomes even more unintentionally insidious because Allison is now portrayed by a woman of color. Vanya soon carries out her rise, taking out Pogo and taking the stage to bring on the apocalypse, with the season ending with all of the Hagreeves children traveling to the past and becoming younger versions of themselves.

They both fare even worse in the comics. The attack by Vanya (who now goes by the White Violin), which occurs toward the end of Apocalypse Suite, is more malicious: It’s a response to Allison attempting to use her powers again. Allison is rendered speechless until the Commission repairs her vocal cords in Dallas. Her motivations are then driven by a man. The Commission threatens to kill the mother of Luther and Five (who are revealed to be twins) if she doesn’t do her part to help Five assassinate President John F. Kennedy. Vanya, who’s left paralyzed and with amnesia after being shot in the head by Five, is left in a room with videos showing just what she did to all of them.

Outside of the Umbrella Academy

The Umbrella Academy features plenty of superpowered women and women with power. Nearly all of them are competent and driven in one way or another. But their functions and motivations in the story are still largely shaped by the men in it. At the very beginning of the series, the women who gave birth to 43 children at the exact same on that fateful October day? Once Reginald Hargreeves gets his hand on seven of the children, they’re never heard from again. Not to mention that mysterious and unexplained pregnancies are already overplayed as a trope as it is.

Grace, who is basically designed to look like a Stepford Wife, exists primarily to care for the children, sooth and encourage them when Reginald tears them down, and as we later find out, to literally withstand abuse from Vanya’s increasingly uncontrolled powers after she kills several nannies. Diego then “kills” her to motivate the other siblings into taking action. And then she takes additional damage once Vanya’s powers are realized.

Later in the season, Diego is on the other end of the fridging narrative. Midway through the season, he arrives at a motel room to find Eudora—who spent most of her time on-screen saving Diego’s neck from legal ramifications of being a vigilante to the point where we don’t know much about her outside of the job—dead on the floor. She was shot by Cha-Cha after holding Hazel by gunpoint (and shortly after freeing Klaus). It wasn’t personal, just business. But Diego definitely took it that way.

Even at the Commission, the women with power find themselves beholden to the whims of men. After putting out a hit on Five and seeing how disloyal he was, she still tries to entice him with an even more lucrative job. Cha-Cha has to keep Hazel, who’s having a crisis of faith, in check on top of her assignment to assassinate Five. Agnes, the server at the doughnut shop Hazel ends up frequenting, becomes the catalyst for Hazel to start making some of his own decisions. And Dolores, who has kept Five company in the years after the apocalypse, is a literal mannequin whose entire personality is shaped by a person who likely went mad from decades of being alone; as Five himself put it to Luther (who would know a thing or two about loneliness), “Solitude can do funny things to the mind.”

And to be sure, The Umbrella Academy has plenty going for it. It has a distinct visual tone, characters fans could instantly root for even with all of their trauma (Five and Klaus are two particular favorites), it gives us a more unique take on the superhero genre, and the show’s music budget is astounding. While it frustrated some viewers, others loved it, just like most shows.

But The Umbrella Academy had even more potential. Who knows how many of these characters—if any—we’ll see next season (which has yet to be officially announced but seems like a no-brainer at this point). Most of them are dead by the end, whether it’s by the hands of someone else or by the apocalypse itself, while the Umbrella Academy heroes traveled back in time with Five and all regressed to their teenage selves. And as they begin to heal and grow, we can only hope that Allison and Vanya get a far better shake of things this time around.