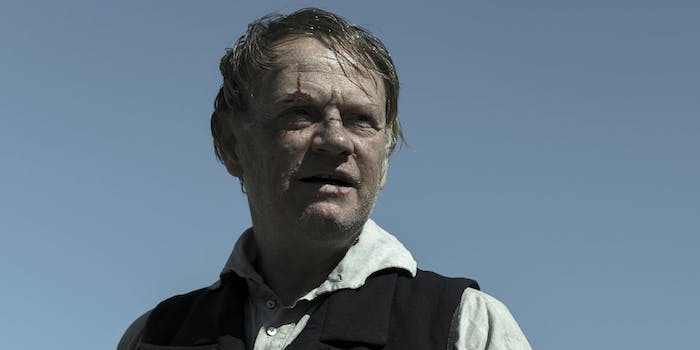 Franklin's infamous expedition went much differently in the comics.

Warning: This article contains spoilers from the season finale of The Terror.

In 10 episodes, The Terror—AMC’s arctic horror miniseries based on Dan Simmons’ novel—took the crew that made up Franklin’s doomed expedition to find the Northwest Passage from a place of foolish optimism to beyond the brinks of despair. Death (and worse) came for nearly all of them in grotesque and cruel manners on- and off-screen. The finale, “We Are Gone,” wiped out the mysterious Tuunbaq and every surviving crew member left with the exception of Captain Francis Crozier (Jared Harris), who realized he couldn’t return home to explain what happened in the Arctic and lived among the Netsilik instead. It’s a quiet and devastating end to a show already marked with incredible performances.

The Terror, both the TV show and the novel—which add a supernatural element on top of a story filled with historical details—is not the first imagining of Franklin’s doomed expedition. Even 170 years after Crozier and Captain James Fitzjames (played by Tobias Menzies in the show) left a note that said the crew had abandoned ship, much of what happened to much of them remains a mystery. And although there have been plenty of theories told over the years, including a play co-written by noted polar expedition fan Charles Dickens, many of them pale in comparison to the utter wackiness of Marvel’s decision to briefly turn Crozier into a supervillain.

What struck me when I first learned about it, even with the AMC series bringing Crozier and Franklin’s expedition back to the forefront, is the randomness of it all. It’s certainly not the first time a real person has made their way into the pages of a comic book, and Marvel had more than its fair share of fictional villains for its superheroes to fight.

Crozier’s first appearance, buried deep within the ice, occurred at the end of Alpha Flight #36, which was published in July 1986. Research crews (and a camera crew) traveled to Beechey Island from 1984 to 1986 to examine the graves of three men who were part of the crew and whose bodies were largely preserved due to permafrost, bringing the expedition back into the forefront. It’s not exactly clear why Crozier was brought into the fray to face off against Alpha Flight, a group of Canadian superheroes, but the callback does make a bit more sense in context.

That particular Alpha Flight arc, which was written by Bill Mantlo (who’s also known for creating Rocket Racoon), is not very good. It jumps all over the place and never quite meshes as it sets up the stakes: the demigod Narya (who’s also known as Snowbird) is about to give birth, and in order to do so, she has to be located in a “Place of Power.” That leads her and Alpha Flight to the Arctic, where Crozier, who was laid to rest 138 years previously, lays dormant.

This version of Crozier is barely recognizable, a much more sinister version of the character than fans of The Terror are used to seeing; he’s probably more akin to the show’s human antagonist, a man that the crew knows as Cornelius Hickey, minus the cannibalism. Faced with imminent death, Crozier prepared a kind of elixir that would slow his bodily functions down enough so it seemed like he died. He figured that his crew would leave him out on the ice, where he could remain until he was thawed out, but the crew buried him instead. And he lay there for 138 years as he experienced the passing of time.

The birth of Narya’s child, however, contained enough power that Crozier was able to take over the child’s body and emerge as Pestilence, one of the Horsemen of the Apocalypse. Rife with power, Crozier defeats Alpha Flight, brings a plague that killed Narya’s husband, destroys the baby’s body, controls Narya—which forced the fellow Alpha Flight member Vindicator to kill her—and later possesses her body before he’s contained.

In the larger scheme of things, Crozier’s involvement in the Marvel universe is minor; like many superheroes, Narya was eventually resurrected. The nearly 32-year-old comic now feels dated, and the introduction of Crozier in the comics is downright hokey.

We don’t know what happened to Crozier and most of the men who ventured off to find the Northwest Passage. Crozier was the only man from that expedition to make it to the end of The Terror, but the depiction of him as the flawed and pragmatic captain who tries to do what he can to protect his men is still a work steeped in fiction. (Some anecdotal evidence from Inuit members questioned by British explorers searching for Franklin’s crew and the Northwest Passage suggests that Crozier may have been alive for several years after abandoning ship.)

What Crozier’s brief Marvel appearance also highlights, in a similar manner to The Terror, is how unnecessary any superheroic or supernatural elements are to telling the stories of the Franklin expedition. Frigid conditions, disease, and lead poisoning that led to madness among some of the crew, the mutiny, and the cannibalism did plenty to demonstrate their sheer desperation in the wake of endless despair. The resolve of Henry Goodsir—who knew that he was dying and that Hickey and his men would later eat his flesh—to take down as many of those men as he could by poisoning himself before he ended his own life is a gut punch all in its own. As is how his body is cruelly and casually displayed afterward, as is Crozier’s slow realization of how all of his remaining men met their grisly ends in the wilderness, as well as what they resorted to in order to live longer.

When the reality is worthy of a tale in its own right, a magical elixir, a Pestilence-wrought plague, and even the Tuunbaq can feel like a bit of a letdown.