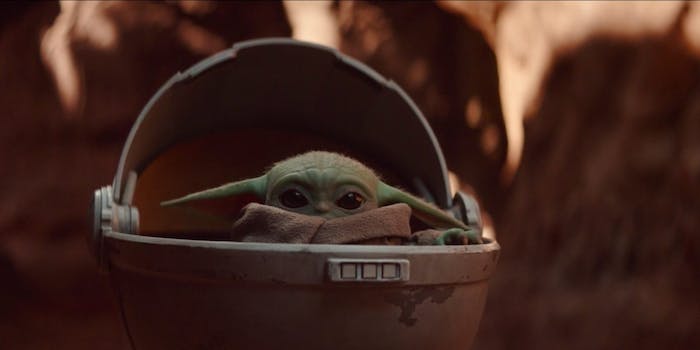 It was all part of the plan.

Update 4:37pm CT, Nov. 21: The wait for Baby Yoda merchandise is almost over. According to a new report from CNBC, clothing and accessories featuring Baby Yoda (also referred to as The Child) could arrive in stores as soon as this Friday through a variety of vendors including Amazon, Hot Topic, Box Lunch, Macy’s, Target, and Zazzle. There are also plans to sell Baby Yoda merchandise at Disney theme parks, the Disney Store, and Disney’s official shop, and soon, plush toys will be available to preorder.

The launch of The Mandalorian introduced us to Baby Yoda—the 50-year-old walking, breathing, Force-using bundle of alien joy that the Mandalorian is tasked with retrieving for a mysterious client—and the internet hasn’t been the same ever since. We’re overjoyed by just about everything this thing does, whether it’s swallowing its dinner whole, using the Force, napping, or just cooing in the general direction of the Mandalorian. (There is a lot of cooing so far.) We want to love it, protect it from harm’s way, and the memes and fanart are already next-level. Every single photo and piece of concept art is cuter than the next.

Right now, there’s one glaring omission in Baby Yoda Mania: There is no official Baby Yoda merchandise. But, according to Mandalorian creator Jon Favreau, there’s a purposeful reason why we’re not already overrun with Baby Yoda plushies and the like.

Speaking to ET’s Ash Crossan ahead of a Mandalorian event last week, Favreau and Dave Filoni (who directed “Chapter 1”) spoke about the pressure of keeping the Baby Yoda reveal a secret all the way up until the episode aired. But the biggest reason that Baby Yoda—or whatever Mandalorian will ultimately call the creature—didn’t leak? There was no Baby Yoda merchandise to leak, and it wasn’t because nobody had the idea to make merchandise. Favreau specifically asked Disney to hold off on releasing Baby Yoda merch right away.

HERES WHY THERES NO SWEET BABY PLUSHY YET https://t.co/RPvteE1wpZ pic.twitter.com/MqBBfH21p9

“The way the cat usually gets out of the bag with that stuff is merchandising and toy catalogs and things like that,” Favreau said. “So they really back us up. We really wanted to have it be that you had to watch it yourself, so that every time you watch the show, there are new twists and secrets that come out. But that requires a lot of restraint from the people who are footing the bill, saying that they’re gonna hold back on certain things so that the public doesn’t know ahead of time. And part of that was holding back on some of the merchandise and holding back on some of the characters.”

Favreau acknowledged how difficult it is to actually pull off a twist or surprise and compared himself and Filoni anxiously waiting to parents putting presents under the tree right before Christmas morning.

“I’m glad people are so curious about it, and I’m also glad that the light that people feel when they discover something that they weren’t expecting,” Favreau added. “So hard to do that nowadays, not just in Star Wars at all.”

We have no idea exactly when official Baby Yoda merchandise will start showing up on shelves, although it does sound like we will get that merch at some point now that the cat is out of the bag. But the good news is that if you can’t wait until then, online marketplaces like Etsy already have you covered, or you can knit or crochet a Yoda hat to create a real-life Baby Yoda.