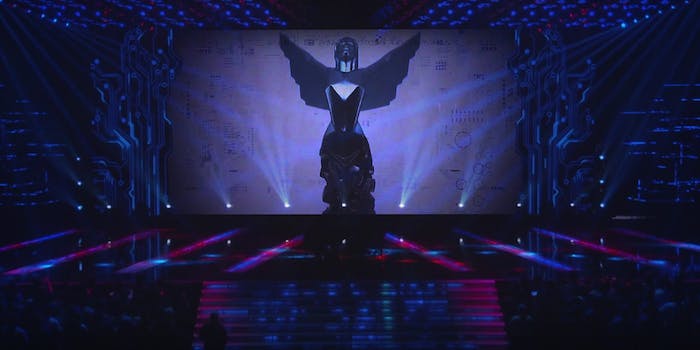 The best new trailers from The Game Awards 2015

The second iteration of the show featured some cool reveals.

Over a dozen new game trailers and reveals were shown Thursday night at The Game Awards.

The second iteration of The Game Awards, hosted by veteran broadcast game journalist Geoff Keighley, was held at the Microsoft Theater in Los Angeles. As with the first Game Awards show in 2014, game marketing was just as prominent as the awards presentations themselves.

The best trailer of the night had to be for Rock Band VR, scheduled for release on the Oculus Rift in 2016. It featured Alex Rigopulos, co-founder and creative director of Harmonix Music Systems, Colby Grenier, one of lead artist at Harmonix, and Oculus founder Palmer Luckey, as they learn how to become rock stars.

The most visually stunning trailer was for a new indie title from Dim Bulb Games and indie developer Johnnemann Nordhagen called When The Water Tastes Like Wine. Dim Bulb Games describes the game as “a bleak American folk tale about traveling, sharing stories, and surviving manifest destiny.”

Telltale Games had two surprise reveals for the audience: A three-part Walking Dead series specifically about Michonne, and a Batman series. Episodes for the Michonne series are right around the corner, beginning in February.

The Batman series only has a 2016 release date. And if the idea of Telltale developing a Batman-themed game makes you raise an eyebrow, just remember that most critics had the same reaction when Telltale announced a Borderlands-themed game, and it turned out to be some of the best work Telltale has ever produced.

The Game Awards also featured the first gameplay reveal for Far Cry Primal, which is scheduled for release on Feb. 23. It looks like animals are going to be your weapons in the newest Far Cry game.

If you want to check out all of the trailers, The Game Awards has set up a playlist on YouTube. You can also watch the entire show on The Game Awards channel. These were the big winners of the night:

Game of the Year: The Witcher 3: Wild Hunt

Photo via The Game Awards | Remix by Max Fleishman