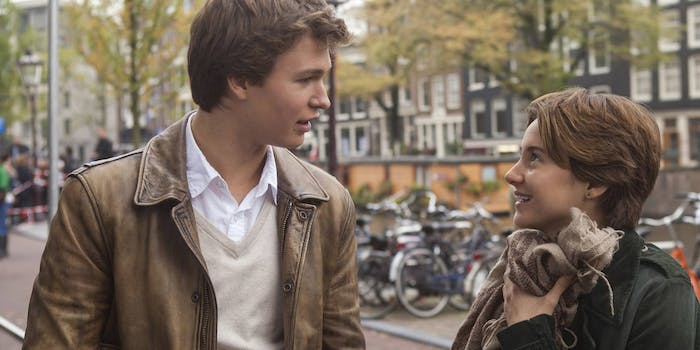 ‘The Fault in Our Stars’ is going to Bollywood

Fans are strangely mixed on the news.

The Fault In Our Stars is getting its own Bollywood remake.

The smash-hit young adult novel and movie has caught the eye of Mumbai’s Fox Star Studios, which is owned by 20th Century Fox and regularly works in conjunction with Fox’s English-language movie projects.

According to The Hollywood Reporter, the Bollywood version of TFIOS will be in Hindi, and the studio had actually been considering adapting the book before the U.S. movie had even reached India. Fox Star Studios CEO Vijay Singh told THR, “We think the story will have an emotional [connection] with Indian audiences. The original English version was released here a couple of weeks ago and is still running. We had actually thought of adapting it locally even before the film was released here.”

This sounds like awesome news for Indian readers of TFIOS (and anyone who enjoys Bollywood movies), so we were surprised to notice that fans on Twitter seem less than psyched about the remake.

BOLLYWOOD ADAPTATION OF TFIOS NO. NO. NO.

A Bollywood version of TFIOS, You don’t understand how it is a nightmare for all TFIOS fans… Oh God Plz don’t let this happen…

So, Bollywood is re-making TFIOS. Can they not?!

Reactions mostly seem to range from bemusement to outright negativity, perhaps because the first TFIOS movie was so popular that fans don’t think any remake could live up to it. But really with any remake, a new version of the movie makes no difference to the original. Plus, it’s no big surprise that other film studios want to capitalize on the success of a book that has gained such a devoted following around the world.