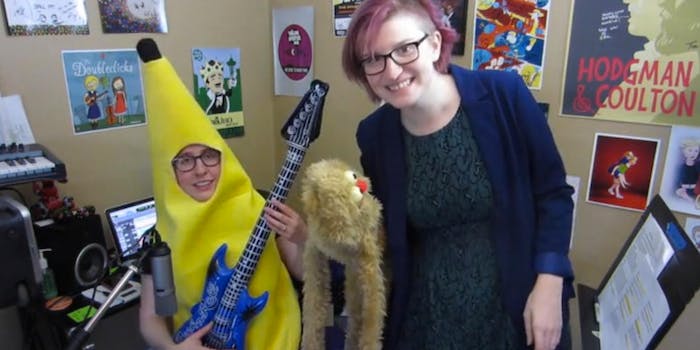 The album will include songs about science, cats, and more!

Thanks to a successful Kickstarter campaign, Portland-based band the Doubleclicks will be releasing a new album called “President Snakes.” Angela and Aubrey Webber, known for their often geeky music, launched the campaign on May 7 to raise money to record the new album and quickly reached their initial goal of $30,000.

The album will include a number of songs that the sisters have already released online, but will feature new, polished versions. The crowdfunding page describes “President Snakes” as “an album about being yourself and dealing with tough times—plus one song about a group of snakes running for President.”

“Unlike our last two albums, ‘President Snakes’ is going to be primarily produced and performed by the Doubleclicks, because it’s honest and raw and very close to our hearts, and we want it to stay that way. We have learned a lot in six years of nerd/folk/music and we are eager to put that all to work on this record!” the Doubleclicks write.

With 20 days left to the campaign as of Wednesday, the Doubleclicks have raised more than $32,677 and are now on their way to reaching their stretch goals. These goals include a playlist written by Angela for the tabletop game “Fiasco” and a printed Doubleclicks coloring book.

You can get a look at the current “President Snakes” track list and learn more about the album on its Kickstarter page.

Screengrab via The Doubleclicks/Kickstarter video