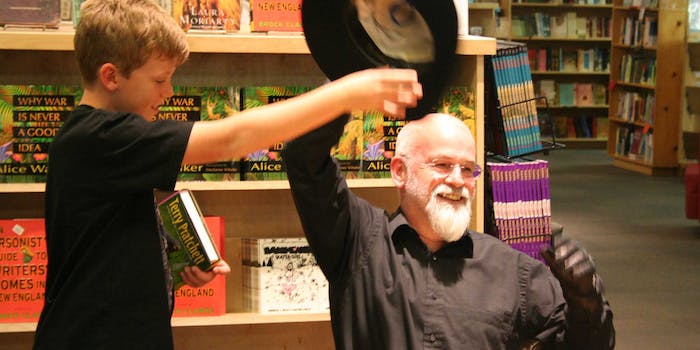 It's nonsense to describe Terry Pratchett's work as overrated trash, especially if you haven't read any of it.

“Get real. Terry Pratchett is not a literary genius.”

The article goes on to characterize Pratchett as a symbol of society’s failure to embrace true literature, emblematic of a “middlebrow cult of the popular” that promotes “mental laziness.” It’s essentially a bingo card of literary snob clichés, finishing up with praise for the “morally sombre plot” of Mansfield Park. Ironically, Jane Austen’s work experienced a similar reception to Terry Pratchett’s during her own lifetime: popular for its witty social satire, but rarely viewed as deep literature.

Austen aside, the best part of the article is Jones’s proud admission that he has never actually read a Pratchett novel. “I did flick through a book by him in a shop,” he writes, “but the prose seemed very ordinary.”

Obviously this sentiment was not well-received by Discworld fans, but this isn’t just a matter of Twitter backlash against an unpopular opinion. For a professional art critic, Jones showed an embarrassing lack of understanding for why Pratchett’s work is so widely revered.

Yes, some mediocre writers maintain lucrative careers by writing bad but popular books. However, Terry Pratchett wasn’t one of them. The Discworld series evolved from cheerful fantasy pastiche into complex political and social satire, lampooning literary clichés and exploring issues of social class, religion, and cultural heritage. The idea of dismissing it all as “trash” seems downright nonsensical. Take Night Watch, for example, an urgent tale of urban revolution that parodies Les Miserables and displays a deft command of historical detail, and whose political underpinnings are consistently relevant to real-life clashes between protesters and the state.

There are shades here of Jones’s criticism of graphic novels, another field in which he seems woefully ill-informed. Earlier this year he complained about the “banality” of modern comics, criticizing the “lack of ambition and verve to their visual artistry” and harking back to the “true artistry” of Robert Crumb. Apparently books like The Arrival and Saga had passed him by, along with the hordes of incredible sci-fi and superhero comics he presumably dismissed for being too frivolous. He doesn’t specifically single out the genre origins of the Discworld series and the bulk of bestselling comics, but the dog-whistle hints are clear: popular science fiction and fantasy is no match for Crumb and Bukowski.

As a personal choice, Jones has every right to ignore Pratchett in favor of authors he believes have more artistic merit. But framing this as a brave act of literary rebellion makes it clear that he isn’t qualified to write this kind of article in the first place. In order to criticize pop-culture, you should at least take some time to experience it firsthand.