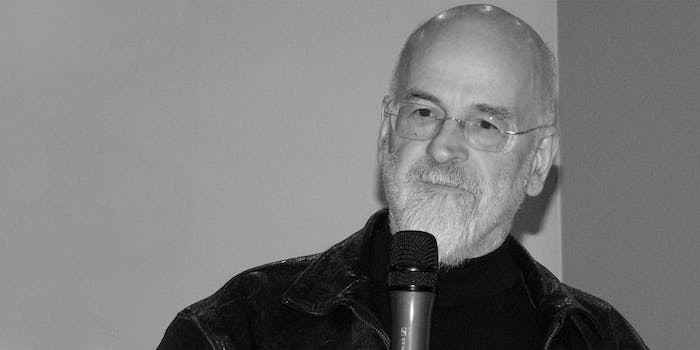 Terry Pratchett is best known for his Discworld series and for co-authoring 'Good Omens' with Neil Gaiman.

Beloved fantasy author Terry Pratchett has passed away aged 66, after a long struggle with Alzheimer’s disease.

The author is best known for his world-famous Discworld series, as well as numerous other science fiction, fantasy, and children’s books. Among his many collaborations is the cult fantasy novel Good Omens, which was cowritten with Neil Gaiman. Over the past 30 years, Pratchett became an icon in the fantasy fiction community, respected both for his humor as a satirist and for the rich creativity of the Discworld books.

Pratchett was diagnosed with Alzheimer’s in 2007, and soon became an outspoken advocate for others who suffer from the disease. He went on to film two documentaries about his experiences, titled Terry Pratchett: Living With Alzheimer’s and Terry Pratchett: Choosing to Die, the latter discussing his support for legalizing assisted suicide. He continued to write and publish throughout his illness, later helped by his assistant Rob Wilkins.

The news of Pratchett’s death was shared via his publisher, Transworld. Transworld’s Larry Findlay wrote, “Terry faced his Alzheimer’s disease (an ’embuggerance’, as he called it) publicly and bravely. Over the last few years, it was his writing that sustained him. His legacy will endure for decades to come.” His obituary links to a donation page at the Research Institute to the Care of Older People.

With characteristic warmth and humor, Pratchett was bid farewell via the Twitter account he shared with his assistant, @TerryandRob. The final tweets introduce Death, the grim reaper Pratchett often wrote into his own books, with his final message being, “The End.”

AT LAST, SIR TERRY, WE MUST WALK TOGETHER.

Terry took Death’s arm and followed him through the doors and on to the black desert under the endless night.

Photo via Moroboshi/Wikimedia (CC BY 3.0)