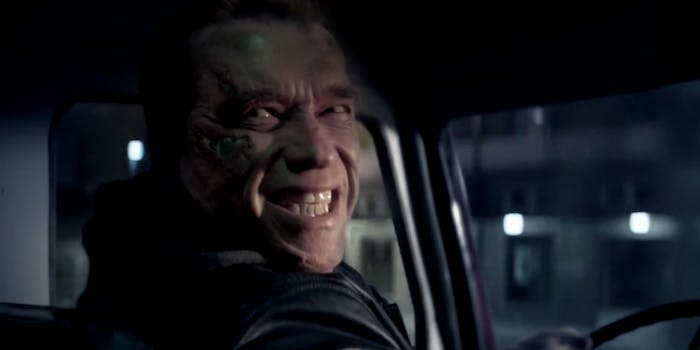 Second ‘Terminator: Genisys’ trailer is as confusing as the first

What may be a major spoiler divulged in the new trailer for Terminator: Genisys doesn’t give us any better idea of what the movie is actually about.

Genisys looks like a second reboot for the Terminator series (following the unimpressive, Christian Bale-helmed Terminator: Salvation), that sticks to the basic plot of all the movies and television shows in the Terminator franchise. Humans nuke each other, an artificial intelligence named Skynet tries to take over the world in the aftermath, John Connor, the hero, leads humanity to victory over the machines.

Terminator: Genisys, which stars Emilia Clarke sans blond hair and dragons as Sarah Connor, looks like a rehash of the time travel part of the story, which is what the original Terminator movie was concerned with. Skynet sends a cyborg Terminator back in time, to kill John Connor’s mother before he is born. Only this time, the Terminator in question is John Connor?

Former California Gov. Arnold Schwarzenegger is making a return as a T-800 model Terminator. Why is his hair grey? We’re meant to think he’s been around, in the past, for a long time, we guess. But are Terminators programmed to get old?

It looks like the John Connor Terminator, or whatever it’s supposed to be, is made of liquid metal. But Skynet didn’t have liquid metal Terminators yet, when the first movie took place. So does Terminator: Genisys take place in an alternate, past timeline? Or will we see that something changed in the future that changes the past?

Trailers like this can go either way. They can get people in the theater to figure out what the hell is going on, or they can make people wait until others tell them whether the details are worth the price of admission.