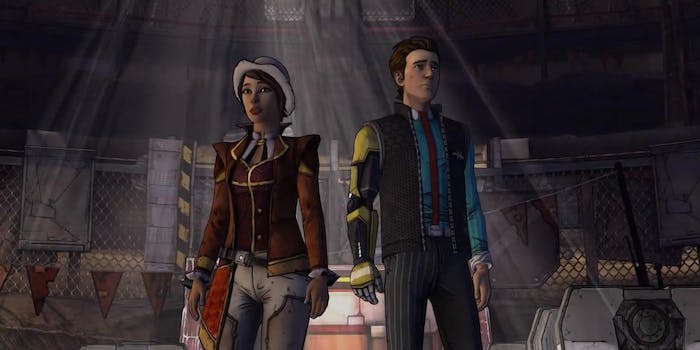 Part one of this new ideo-game series will be released soon.

Just two days after Telltale Games revealed exciting new details about its upcoming Game of Thrones video game, the company released the first gameplay trailer for another game in their lineup: Tales from the Borderlands.

The creators of episode video-game series for The Walking Dead and Fables debuted the trailer on Thursday for this five-part game set after the events of Gearbox Software’s Borderlands 2. Like its predecessor, Tales from the Borderlands will be set on the world Pandora, where players will be able to take on the roles of two characters, Rhys and Fiona.

Telltale also revealed members of the game’s cast, which will include Troy Baker as Rhys, Laura Bailey as Fiona, Chris Hardwick as Vaughn, and Dameon Clark as Handsome Jack.

Tales from the Borderlands will be available on PlayStation 3, Playstation 4, Xbox 360, Xbox One, PC, Mac, and iOS. According to the trailer, the game series is also coming to other platforms that have yet to be announced. The first episode, titled “Zer0 Sum,” is expected to be available later this year.