In 'Game of Thrones' you win or you die—and it's no different this time.

Game of Thrones is an oppressive torrent of horrible things done by terrible people, broken up by moments of cathartic release when our favorite characters seem to be gaining ground—and then wind up dead.

And the adventure game by Telltale Games is like that, too.

Telltale’s Game of Thrones should be the end of any debate as to whether or not Telltale can apply its adventure game formula to any adaptation you throw at it. I saw things in Telltale’s rendition of the Game of Thrones universe that rivaled the awfulness I’ve seen on the show. I jumped from playing the post-apocalyptic Fallout 4 to playing Game of Thrones and didn’t feel like I was killing any fewer people.

I saw the sons and daughters of a noble house slaughtered and brave warriors meeting death with no fair chance to defend themselves. Over the course of the six episodes in Telltale’s Game of Thrones, I built a running list of all the people I wanted to see dead. It felt precisely the same as learning to hate the sadistic young King Joffrey Baratheon, his icy grandfather Tywin Lannister, and the evil Ramsay Bolton as I watched the HBO series.

And when I’d finished the sixth and final episode of Telltale’s Game of Thrones, and took stock of all the suffering I’d seen and all the hatred I felt for so many characters. I was exhausted. 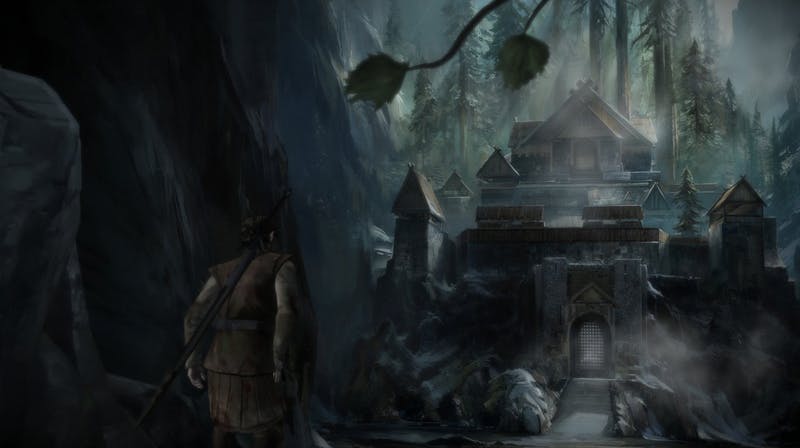 Ironrath, the seat of House Forrester.

Game of Thrones the game is the story of House Forrester, a noble family from the north of Westeros whose fortunes and reputation are built on the sale of ironwood trees. Ironwood is prized as a building material, and the Forresters reside in Ironrath keep at the edge of the ironwood forest.

Gregor Forrester and his firstborn son, Rodrik, are serving in Robb Stark’s army when it is ambushed at the Red Wedding. The events of that night trigger a slow spiral as House Forrester disintegrates. Telltale’s Game of Thrones is your attempt to keep the the Forresters from utter ruin via controlling a slate of different characters.

Mira Forrester is a handmaiden to Lady Margaery in King’s Landing where she attempts to play politics to the benefit of her family. Asher Forrester is serving as a mercenary in Essos, exiled from Westeros for having a love affair with the daughter of Ludd Whitehill, the avowed enemy of the Forresters and the primary antagonist in the game.

Gared Tuttle is Lord Gregor’s former squire, banished to the Wall and forced to join the Night’s Watch as punishment for killing some of Ludd Whitehill’s soldiers. Gared is also secretly on the hunt for the North Grove, a hidden forest that lies somewhere beyond the Wall. The North Grove is so important that Lord Gregor spends his dying words asking Gared to protect it.

The characters in the game bear a resemblance to what we’ve already seen in the HBO series. The Forresters, a family of good people ripped apart by the depredations of greed and politics, seem to echo the Starks. Mira, like Sansa Stark, is set adrift in the cruel machinations of King’s Landing. Asher seeks to return home to restore his family to glory, not unlike Daenerys Targaryen. Gared is torn between keeping his vows to the Night’s Watch and wanting to help restore his former House—a quandary also faced by Jon Snow.

The game also tries to parallel the episode structure of the HBO series, which in the game became a problem. The HBO series will spend 15 to 20 minutes in one setting, and then cut to another part of Westeros or Essos for another scene of similar length.

There were numerous occasions where I felt Telltale could have stapled together all the scenes in one of the game’s settings into a contiguous whole to create a smoother experience. 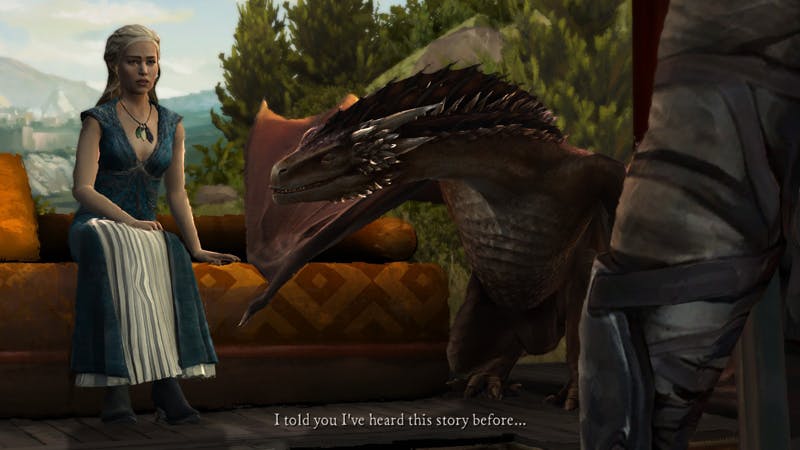 Because what would a Game of Thrones game be without the Khaleesi?

Game of Thrones is technically a side story, but it’s wrapped around the HBO series so closely as to sometimes question credulity. How do all of these different characters manage to be linked so closely with the series leads?

It’s terrific fan service because the voice acting is well performed. All the recurring appearances by characters from the HBO series also at times make it feel like Telltale wasn’t given enough room to create their own version of a Game of Thrones story. In fact, I’m not sure how much someone who isn’t a fan of the HBO series could get out of the game. 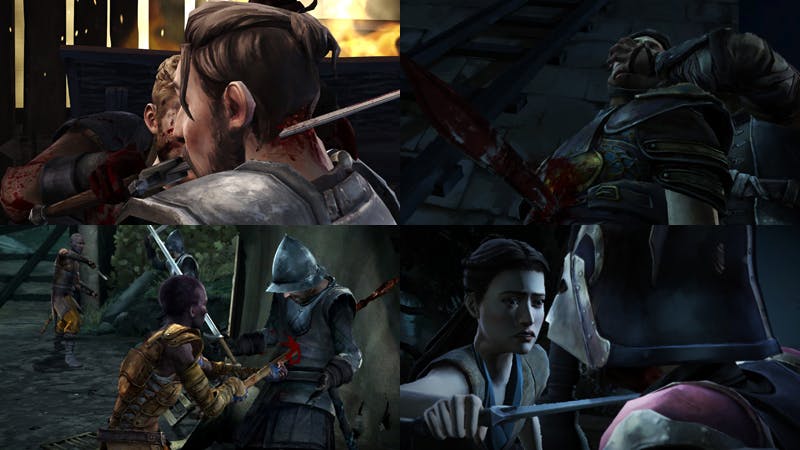 Yup. This is definitely Game of Thrones.

I was glad Telltale steered away from sexual content, because it meant I didn’t have to revisit some of the horrific ways sex is used as a device in the HBO series. After seeing the way Telltale’s writers employed violence in Game of Thrones, I have to wonder what they would have produced if the gloves had been taken off entirely when it comes to graphic content.

Flayings and disembowelment, brutal last stands against the enemy where men are chopped into pieces, arrows through heads and swords through throats—there is so much violence in Telltale’s Game of Thrones that bloody death almost defines the game to the degree it defines the HBO series. Again, what Telltale produced is authentic.

The fight scenes are some of best action I’ve enjoyed in any game released by Telltale, in large part because I learned just how easy it is to see your character killed in the game.

Slipping up on one key press often meant a messy death and the words “Valar Morghulis” (all men must die) popping up on the screen. Telltale is definitely getting better at working action into its games. 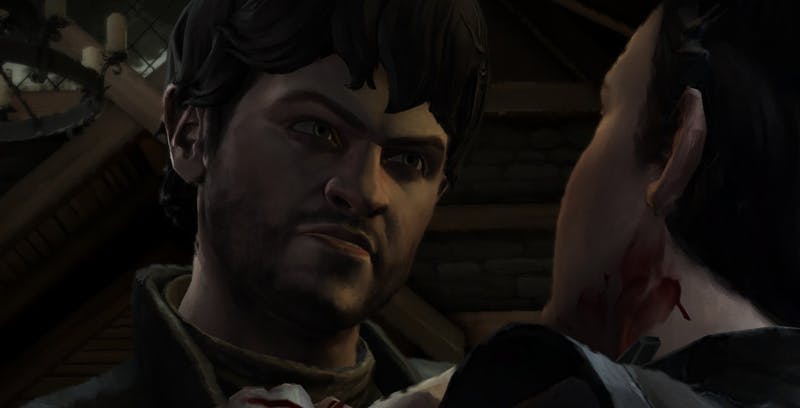 Also like the HBO series, no character in Telltale’s Game of Thrones is safe from violent death no matter how central the character may feel to the story, and this became a major bone of contention I had with the game.

It’s one thing to be a passive observer while watching the HBO series and grimacing and being surprised when a beloved character is killed with little warning (if you haven’t read the books). It’s something else entirely to be responsible for those deaths. I managed to get most of the Forrester clan killed.

I don’t know whether it was due to all the decisions I made—Telltale games mostly revolving around dialogue choices and branching storylines of course—but I have a sinking feeling that no matter how many times I went back and tried to save most of the characters, they’d still wind up dead because that’s just how Game of Thrones stories go.

You don’t watch the show or play this game if you want to get attached to people. You essentially sign up to watch people you care about being broken and destroyed. I felt by the end that Game of Thrones is to adventure games what Dark Souls is to action games: an experience whose appeal feels like it comes down to a variety of low-grade sadomasochism.

When playing an adventure game means stepping into your character and allowing yourself to be injected into the game, do you want to put much effort and consideration into your decisions knowing that a violent death is probably inevitable? 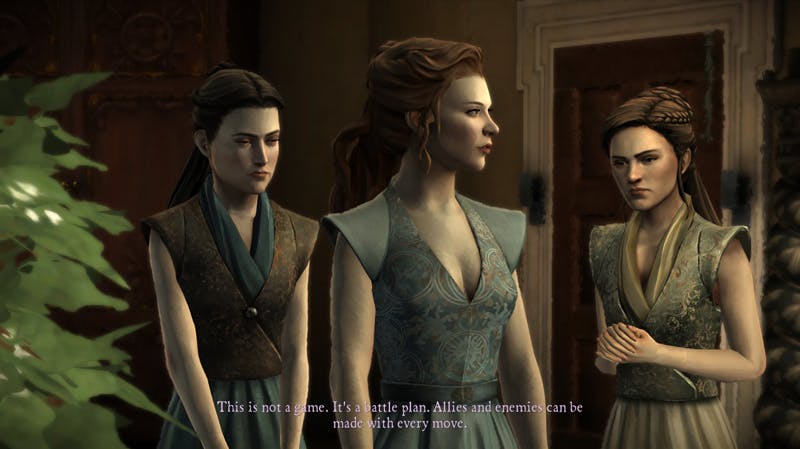 Who said handmaidens couldn’t be dangerous?

The most difficult task facing Telltale had to be trying to make Mira’s scenes interesting. King’s Landing is all about parties and other social gatherings, and the political game that takes place therein is about rumors and innuendo, veiled threats, and false promises.

For Mira this mostly comes down to whether or not to lie to cover another character, or whether to throw someone under the bus to her benefit, or which allegiances to choose when it becomes convenient, or whose anger to risk when the potential rewards for House Forrester are high enough.

There’s a smattering of fighting and death in King’s Landing, but for the most part it’s just social maneuvering and conversation. I didn’t expect trying to control merchant deals for the sale of ironwood or navigating the seas between Lady Margaery and Cersei Lannister to become one of the most interesting parts of the game.

If there is a single aspect of Game of Thrones that might inspire a second playthrough it’s Mira’s storyline. I’ve never seen court politics made interesting in a video game before, which is a credit to the writing team at Telltale. 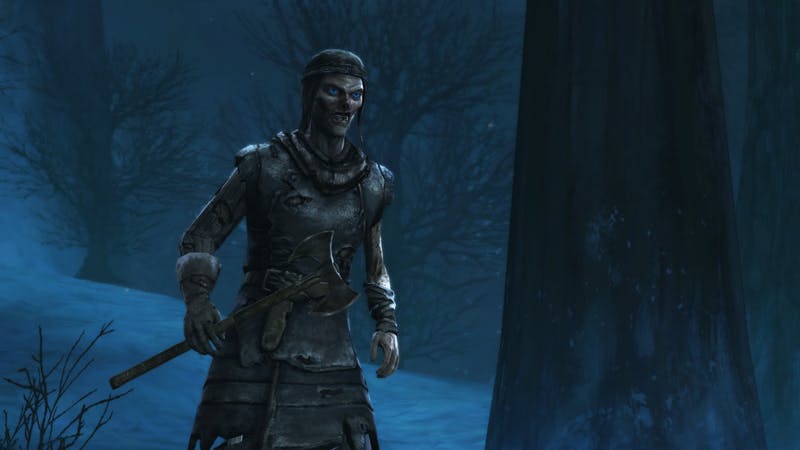 Telltale pays off with some wights much quicker than the HBO show did.

Telltale did a great job with the graphics in Game of Thrones. Everything has a soft, watercolor-inspired look that is unlike anything Telltale has produced before. The artists and animators at Telltale are just as adept as the writers in adapting to the source material, to the point where playing Game of Thrones had me wondering whether there actually is such a thing as “a Telltale game.”

Tales from the Borderlands was a success for me because it so wonderfully recaptured the spirit of the Borderlands games, and I love those. A Wolf Among Us was a positive experience because I find the fantasy world of Fables so interesting.

I wasn’t feeling Minecraft: Story Mode because I’ve spent too much time playing the real Minecraft to feel any sense of kinship between the two experiences. I wasn’t so pleased with The Walking Dead: Season Two because the misery of the television show felt oppressive in video game form and wore me down.

Game of Thrones got on my nerves to the point where I was yelling at characters to quit stalling and to get on with revealing whatever the awful thing was they were going to reveal. Whatever it was, it would likely lead to my having to make a horrific choice—the same frustration I have with the HBO series.

I’m only watching the show at this point because I want to see Ramsay die a horrific, violent death as recompense for all the sick, twisted things he’s done. That seems like a terrible, hate-filled reason to watch a television series, but it’s also the same reason I would play a second season of Game of Thrones from Telltale. I’d like to see the characters on my aforementioned death list come to an abrupt end.

That’s not an uncommon motivation for a lot of Game of Thrones fans—and the same goes for many of the characters in the story. I can therefore think of no finer way to describe just how authentic a Game of Thrones experience Telltale has crafted.

Disclosure: Our review copy on Steam of Game of Thrones was provided courtesy of Telltale Games.

Game of Thrones has also been released for the PlayStation 3, Playstation 4, Xbox 360, Xbox One, and Android and iOS devices.