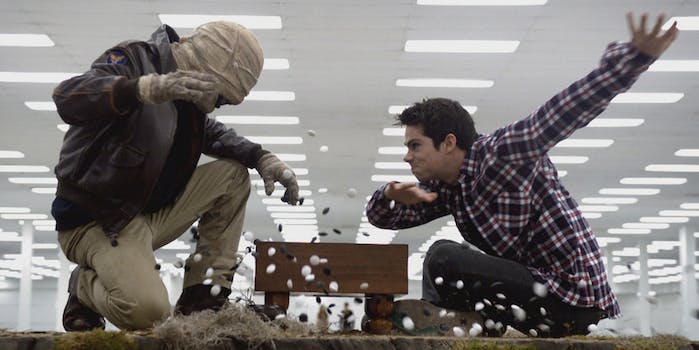 The best way to describe Teen Wolf would probably be “predictably unpredictable.” Every episode has a million dramatic twists and turns, but there are always a few things you can count on.

In the last two episodes of season 3B, Lydia got kidnapped and screamed a lot. Stiles looked haunted and stressed out. Someone took their shirt off for no good reason. A lot of fighting happened in the high school, the sheriff’s department, and the hospital. There was even an obligatory night time scene in the Beacon Hills High boy’s locker room.

Basically, if you were playing the Teen Wolf drinking game during the season finale, then you definitely would’ve been able to dull the pain of Allison’s death in last week’s episode.

Of course, there’s a downside to the now-familiar patterns of Teen Wolf melodrama. Everyone loves to see tears shimmering in Dylan O’Brien’s enormous Bambi eyes, Coach Finstock being hilariously weird, and flotillas of attractive new guest stars being ushered in to replace last week’s corpses. But with this many familiar tropes in place, there are a few unintentional ones that fans begin to notice as well.

Allison’s death inevitably upset a lot of people, but not just because she was a beloved character. For a long time, many fans have been tracking the ratios of dead and living characters in the show, discovering that white male characters are overwhelmingly more likely to stay alive (or be resurrected) than anyone else.

While Allison’s death was actually due to the fact that actress Crystal Reed wanted to leave the show, it seemed to fit in with the ongoing trend of dead female characters. Even taking into account the death of Aidan and the apparent resurrection of Kate Argent in the season finale, there are still way more male characters in general, and a disproportionately high number of female deaths.

That being said, 3B may well have been the best season yet. The main cast got to stretch their acting muscles more than ever before, particularly Dylan O’Brien. Also, while Sterek may not be canon yet (or ever), this season saw unprecedented levels of fanservice—and we definitely don’t mean that in a bad way. The concept of a demonically possessed Stiles has existed in Teen Wolf fandom for years, but this season made it a reality, with Dylan O’Brien taking on the dual roles of a confused and terrified Stiles, and the malevolent Nogitsune demon.

It’s unlikely that the Nogitsune storyline was directly inspired by fandom’s love of demon Stiles fanfic and GIF art. More likely, the show’s writers just recognized that Dylan O’Brien is a ridiculously good actor, and this type of storyline was an ideal way to torture every character as much as possible. But 3B also included a bunch of affectionate nods to other fanfic tropes like Stiles fighting monsters with his baseball bat, and—as we found out in the finale—the possibility that Danny knew about werewolves all along. Best of all, the main cast are slowly but surely banding together to create the wolf pack that fans have been writing fic about since the beginning. In particular, Derek has come a long way from being an angry, distrustful jerk in Season 1, to being Scott’s biggest fan in the Season 3 finale. Seriously, that speech where he basically told both of the twins that Scott was the Best Alpha Ever? Awesome.

So yes, Season 3B did its best to satisfy the fans, neatly wrapping up the Nogitsune storyline and providing us with a central group of characters who finally work together as a team instead of switching sides every 30 seconds. Unfortunately, in among all of those delicious little fanservice details lurked a spectre that Teen Wolf will probably never escape: Sterek.

Most Sterek fans have now come to terms with the possibility that Stiles and Derek may never be a couple on the show. The main issue now is how Teen Wolf and its writers decide to handle the pairing’s overwhelming popularity among the show’s fans.

This season, the biggest blow to Sterek fans wasn’t any kind of public statement from showrunner Jeff Davis, or even the recent interview where Dylan O’Brien said that Stiles “clearly isn’t gay.” No, it was the introduction of a romantic subplot between Stiles and Malia Tate, a girl who went missing as a young child and spent eight years living as a werecoyote in the forest.

Now, for Teen Wolf, this isn’t even all that weird. Also, it’s not exactly unheard-of for shippers to start hating on new characters who seem to “break up” their favorite pairing, even if it’s a non-canon pairing like Sterek. The problem was that as someone who had effectively been living as an animal in the forest for eight years instead of doing things like going to middle school, Malia Tate seemed oddly normal. As in, when she transformed back into a human for the first time, she had perfectly straight, white teeth, plucked eyebrows, and conditioned hair. And had no problem communicating like every other teenager on the show.

Within a few episodes Malia wound up making out with Stiles in the basement of a mental institution (again: not all that weird for Teen Wolf), taking her shirt off to reveal sexy lingerie. First of all, where did she even get that bra? Did her dad buy it for her, during the couple of weeks he still had custody of his long-lost feral daughter, before having her committed to a mental hospital? Secondly, shouldn’t she have the education and social skills of a fourth grader?

It wasn’t difficult for Teen Wolf fans to find this pretty creepy, whether or not they personally wanted Stiles to be making out with someone like Derek or Lydia instead. This wasn’t helped along by the fact that Grimm had a similar plotline a couple of years ago, but made sure to point out that the feral wolf girl could barely cope with human society as an adult. The season finale seems to have been the final straw, as Malia enrolled at Beacon Hills High and will definitely be returning as a regular character next season.

Overall, 3B seems to have regained the trust of fans who were were unhappy about the first half of the season. Which begs the question, can Season 4 retain that interest? The influx of cute new boy characters next year suggests that after four years, one or two of the leading men may be on the way out. Here’s hoping none of those potential deaths include Derek or Stiles, if only for the sake of Tumblr’s servers.