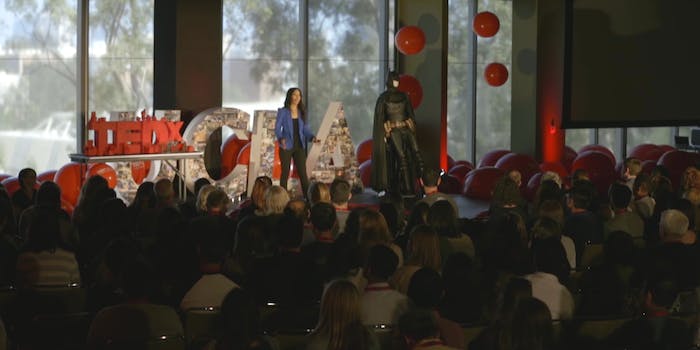 Dr. Andrea Letamendi shares how superheroes affected her life and what they can do for others.

At age 12, clinical psychologist Andrea Letamendi discovered someone who would have a major impact on her life: Batman. Her journey from discovering Batman: The Animated Series to reading the comics, embracing her interests and learning how powerful comic books can be, was the topic of a recent TEDx Talk, “Capes, cowls and courage: the psychological power of superheroes.”

During the talk, Dr. Letamendi recounted how she was mocked for liking comic books in school, which led to her hiding her interest and eventually forgetting about comics altogether by the time she graduated college. It was only after going to graduate school in San Diego and experiencing Comic-Con that she became interested again—though she still kept her activities secret from her colleagues.

Letamendi’s story is one to which many geeks can probably relate. She describes her “imposter syndrome” and how she eventually discarded the mask she hid behind. She eventually realized her “place in the universe was not to be a masked avenger, but to help people see who they truly were through the power of story.”

Now she regularly speaks about the psychology of superheroes and other aspects of geek culture at events across the country. Her TED Talk is a reminder that superheroes like Batman are much more than just stories—they can truly make a difference in our lives.