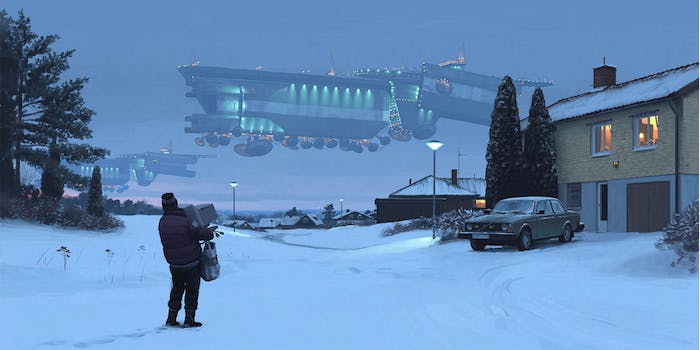 Amazon Studios has greenlit Tales from the Loop, an eight-episode series based on the artwork of author and illustrator Simon Stålenhag.

The show is a collaboration between Amazon Studios and Fox 21 TV Studios with Legion writer and producer Nathaniel Halpern on board as the showrunner. The pilot will be directed by Mark Romanek (Never Let Me Go), and the show will stream on Amazon in more than 200 countries.

“Simon Stålenhag’s paintings are renowned for their vision of a not-too-distant, futuristic landscape,” Amazon Studios co-head of television Albert Cheng said in a statement. “We are looking forward to bringing that to life and sharing it with our Prime Video audience.”

Tales from the Loop features artwork depicting an alternate Sweden where the country blends with sci-fi as the ramifications of building the Loop—“a large particle accelerator”—become known.

“I was immediately intrigued by the idea of bringing Stålenhag’s incredible paintings to life, but it’s Nathaniel’s deeply inspired vision for this world, and the stories he has created from an incredibly passionate and emotional place, that will drive this series and its storytelling,” Fox 21 Television Studios executive VP Jane Francis said.

Stålenhag, who casually revealed the news of his artwork being turned into a TV show by noting “I made some stories about my tiny hometown and then this happened,” has been retweeting congratulatory messages from fans.

I made some stories about my tiny hometown and then this happened: https://t.co/3PyQsog1Bu

He added that the series would be based on his book over the role-playing game and likely have a more American feel; he noted that he “wanted a US screenwriter who could create a personal american parallel story.”