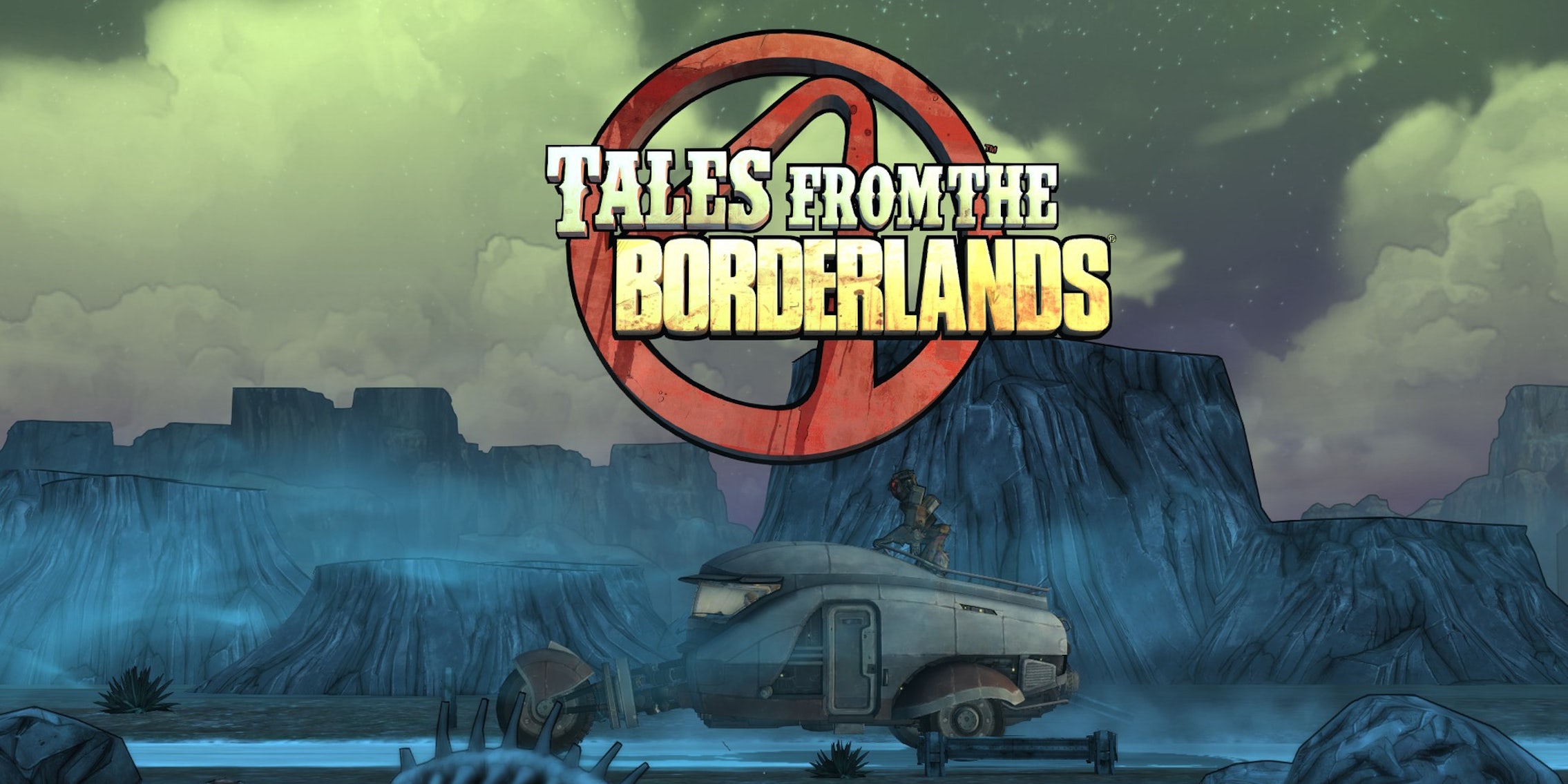 You don’t need to be a Borderlands fan to appreciate Tales from the Borderlands.

When Telltale Games announced that it was creating an adventure game based on the first-person shooter series Borderlands, it sounded like a horrible mismatch.

Players in the Borderlands series take the roles of eccentric heroes killing thousands of violent psychotics with a zillion different kinds of guns while screaming across the deserts, lava fields, and frozen wastes of the backwater planet Pandora.

The epic adventure of the Borderlands series spans three different games in a world so well-crafted that it’s practically a character in its own right. It was a rich vein of source material for Telltale, but also material wrapped around a first-person shooter framework, whose frenetic running and jumping and shooting are the polar opposite of the comparatively glacial pace of the adventure game.

No one would have guessed that Tales from the Borderlands would turn out to be some of the best work Telltale has ever produced. 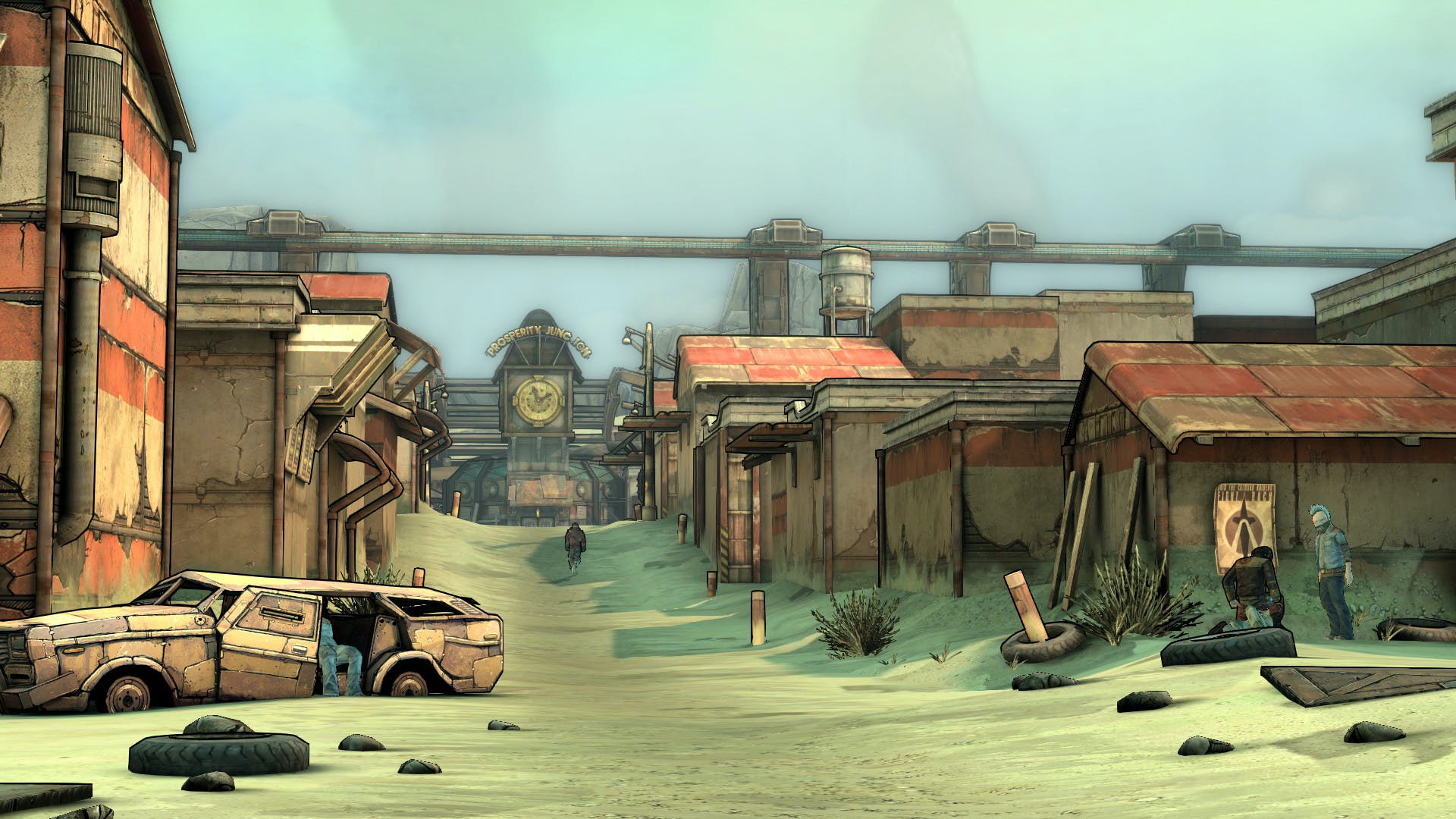 The only reason anyone in the galaxy would set foot on the blasted hellhole that is Pandora is because it’s where the first Vaults were discovered: treasure troves filled with advanced technology left behind by a long-extinct advanced alien species.

Vault Hunters converge on Pandora to find these hidden treasures and to kill one another in the race to find new Vaults. And the greedy, cutthroat Hyperion Corporation has put a satellite named Helios into orbit around Pandora to plant its flag and grab all the Vaults it can.

Fiona and her sister Sasha are childhood Pandoran pickpockets who have graduated into accomplished con artists, and they’ve set up a scam to sell a fake Vault key for $10 million to a Hyperion executive. Rhys is a Hyperion middle manager who gets screwed out of a promotion by said executive, so Rhys and his partner Vaughn steal the $10 million and attempt to purchase the Vault key for themselves.

The key is revealed as a fake, the money gets lost, and Fiona, Sasha, Rhys, and Vaughn find themselves thrown in together as Pandoran criminals and Hyperion stooges—all of whom got screwed by the deal gone wrong—chase our heroes across the planet.

In the process of escaping they stumble across a key that can track down the most elusive Vault of all time. They also resurrect the digitized ghost of Handsome Jack, the former commander of Helios station and a narcissistic sociopath who was willing to destroy the planet if that meant getting his hands on a Vault. 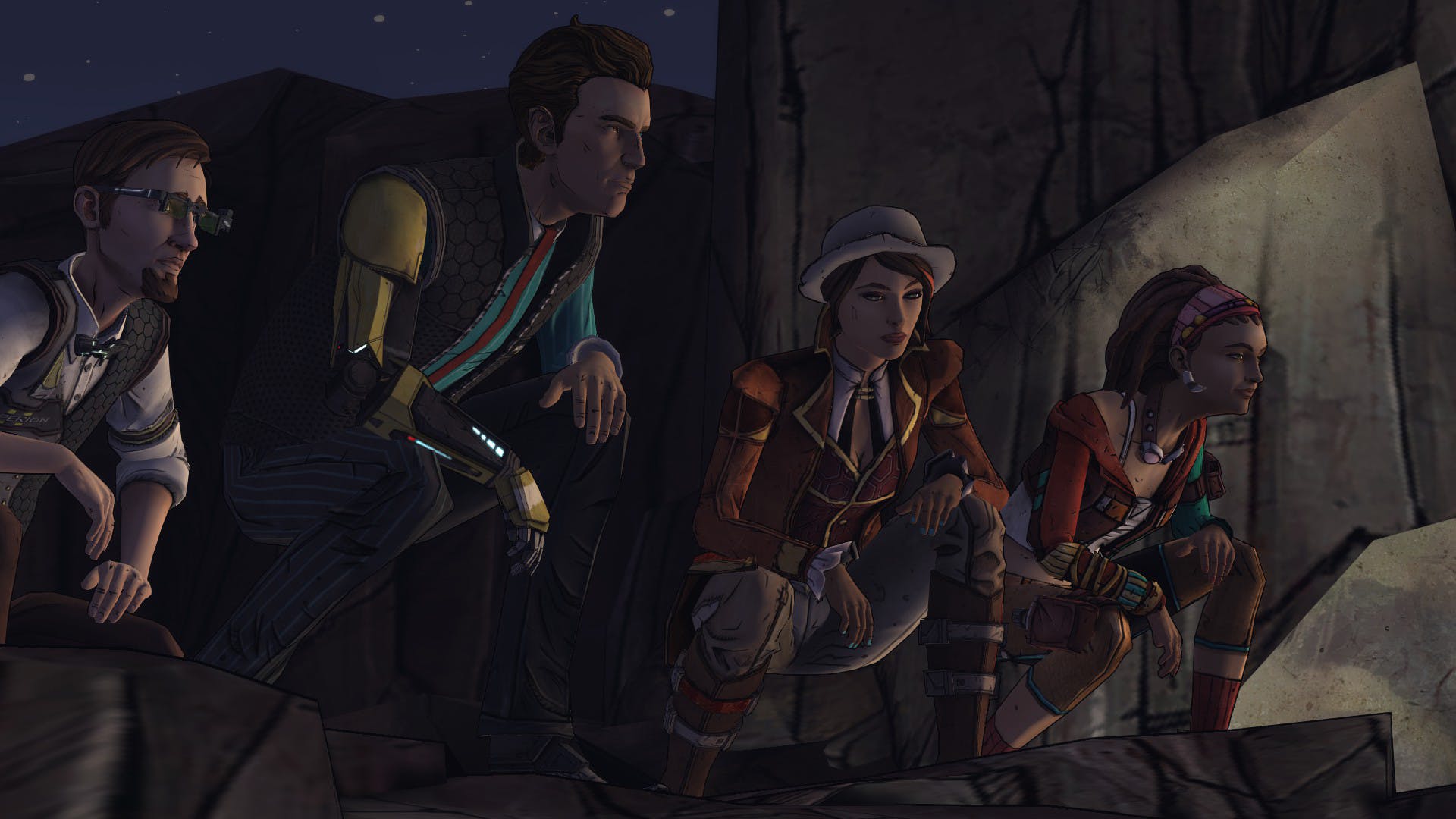 The story begins with Rhys and Fiona held captive by a mysterious stranger who is marching them across the Pandoran desert and forcing them at gunpoint to explain how the Vault key deal went wrong.

The player switches between the roles of Rhys and Fiona in the flashback sequences that dominate Episodes 1 through 4. The transitions from past to present are perfectly smooth. In fact, all the editing in the first four episodes of Tales from the Borderlands is superlative and dripping with style.

The opening credit sequences to all five episodes are fantastic, entirely on par with the interesting cinematography, deft editing, and catchy soundtracks of Borderlands 1 and 2. The intro to Episode 2 of Tales from the Borderlands is particularly wonderful.

That the cinematography and editing in Tales from the Borderlands demand notice is testament to the well-honed filmic craft on display from Telltale. There’s a scene in Episode 2 where you have to remove someone’s eyeball with a spork in order to activate a retinal scan. The game cuts to a shot from the eyeball’s perspective as Fiona tends to the dirty work.

It’s an absurd choice of cinematography for an absurd scene that could have been only cringe-worthy. Instead, it becomes hilarious for how the scene is shot, a hallmark of the best visual storytelling. 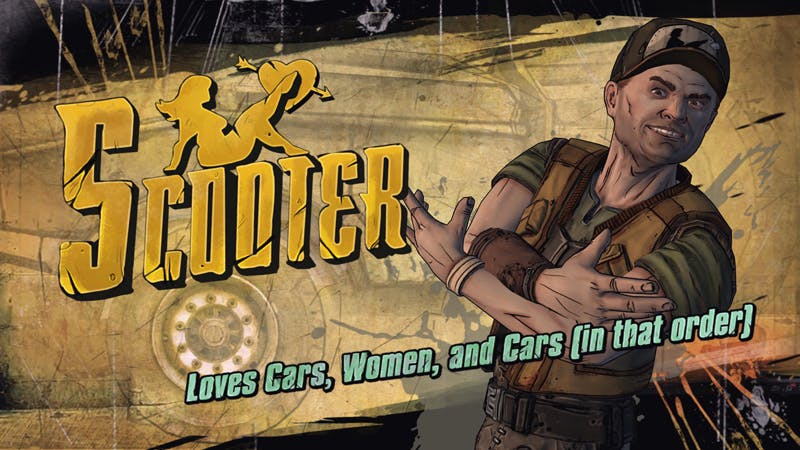 The Borderlands series is largely defined by its comic appeal. Telltale not only faced the difficult task of making a funny game—comedy is more difficult to pull off than action, horror, or drama—but it had little room for error if Tales from the Borderlands wanted to feel authentic to the source material.

A huge advantage in Telltale’s favor was the ability to draw on the deep cast of supporting characters in the Borderlands series. Telltale draws liberally from the pool of potential characters without feeling like a cheap franchise tie-in.

In fact, I don’t think you need to be familiar with the Borderlands games to appreciate these characters as they’re depicted in Tales from the Borderlands. 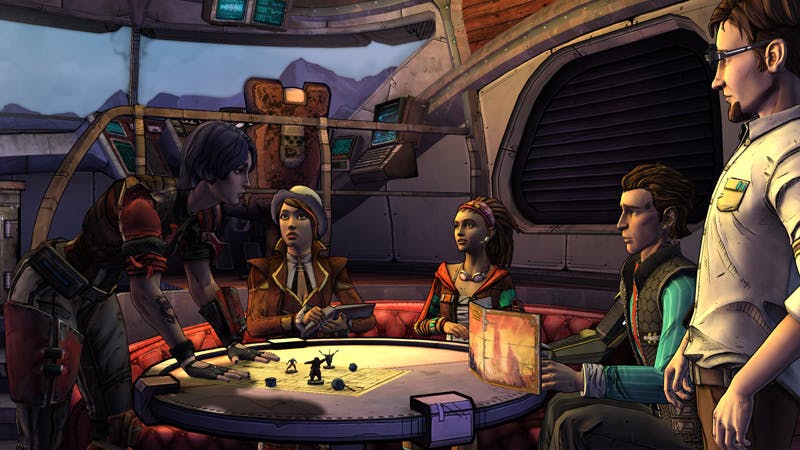 During the dialogue sequences in Telltale games you are usually given three different lines to choose from, or you can remain silent. In other Telltale games, I’ve chosen one of the lines of dialogue in almost every instance. I went in with the expectation that I was meant to be center stage in every scene, because I was playing the “star” of the game.

In Tales from the Borderlands, however, I chose silence more than in all the other Telltale games I’ve played combined (and I’ve played most of them). I chose silence because I was genuinely enjoying the interactions between the other characters. I didn’t want to interrupt as bosses resolved conflicts with their goons or while the motley cast of heroes argued amongst themselves.

I was content to be just one character in an ensemble cast. I also chose silence because I was frequently concerned that what I had to say might get someone killed. Too many of Pandora’s inhabitants are trigger-happy. To take making smart-ass comments lightly meant I could lose someone.

Even in the Walking Dead series of games from Telltale, which take place in a world where everyone’s life is constantly under threat and a single wrong move could get someone killed, I was never as concerned about the fate of the characters as I was in Tales from the Borderlands, because I genuinely liked everyone. 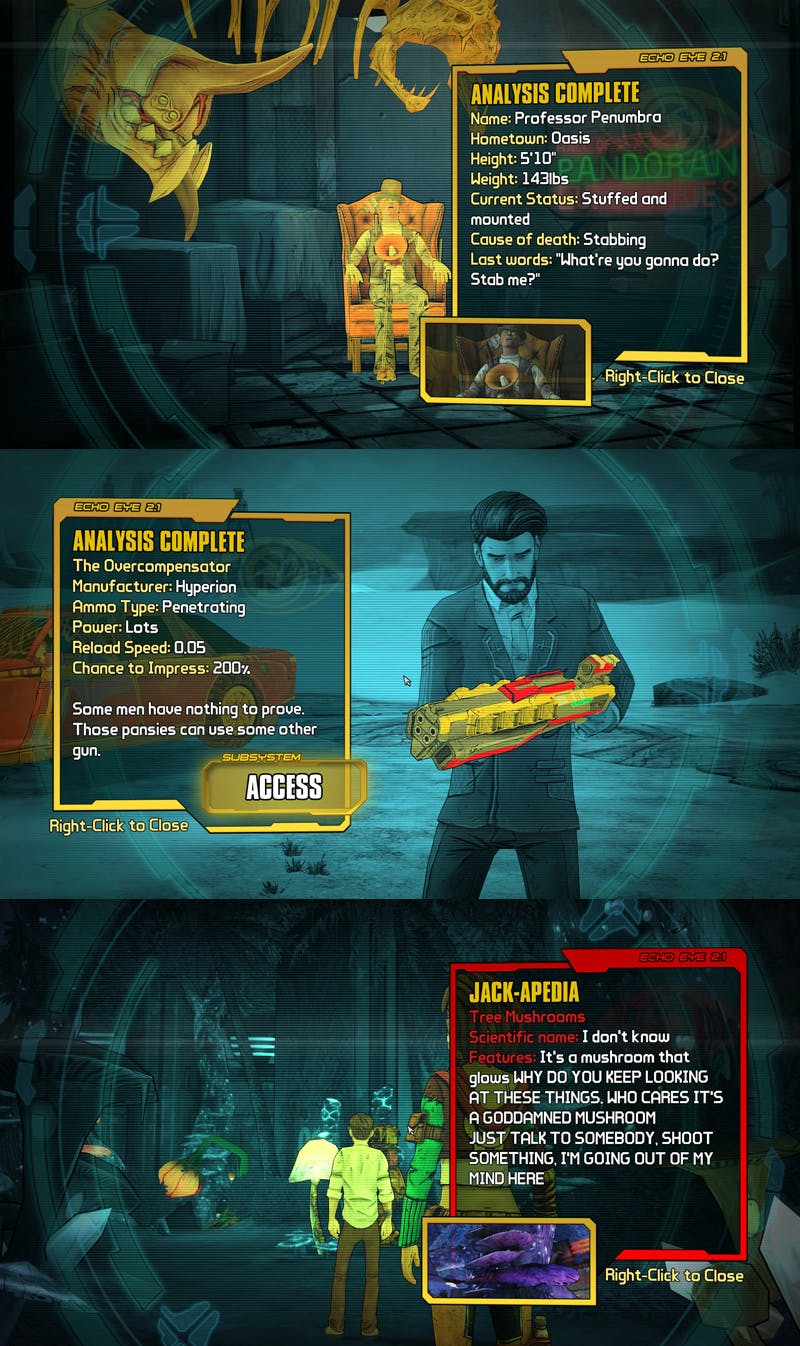 Rhys is equipped with a cybernetic implant, called an Echo Eye, that is a clever device for Telltale to replicate a key elements of the Borderlands series: humor through text.

The Echo Eye allows Rhys to scan objects in the environment. Sometimes it’s used to hack into computers or to locate items the player needs, but more often the Echo Eye is used just to get details on flora and fauna and other elements of the group’s surroundings.

The effect is hilarious and a quintessential example of how the Borderlands series creates humor through text. Telltale uses the Echo Eye mechanics and the computer windows that display the results of the scans to embrace the same techniques. 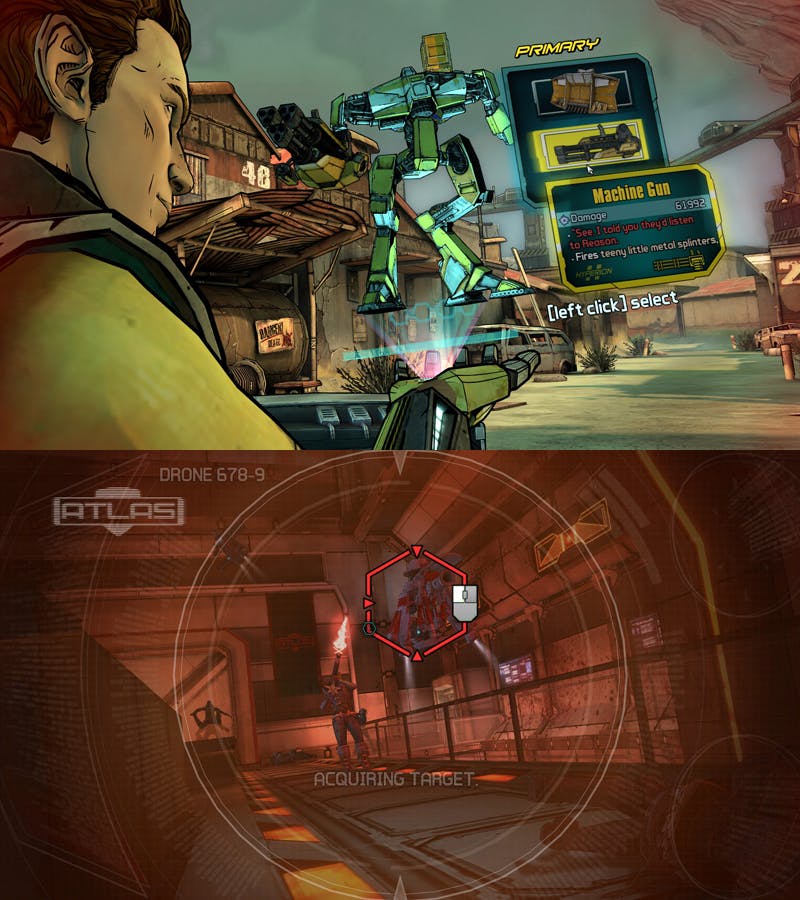 All of this Echo Eye scanning is done through a first-person perspective that affords Telltale the ability to nod at the source material. Incorporating the shooting mechanics that also define the Borderlands series must have been much more difficult for Telltale to work out—but they pulled it off.

The game lets you pick the weapon loadout for a Loader Bot, select targets for combat drones, and chose what kind of elemental damage to do to enemies with Shock, Corrosive, and Explosive rounds. It’s not the same as firing weapons from a first-person perspective, but it does manage to make Tales from the Borderlands feel like it has some genuine gunplay. 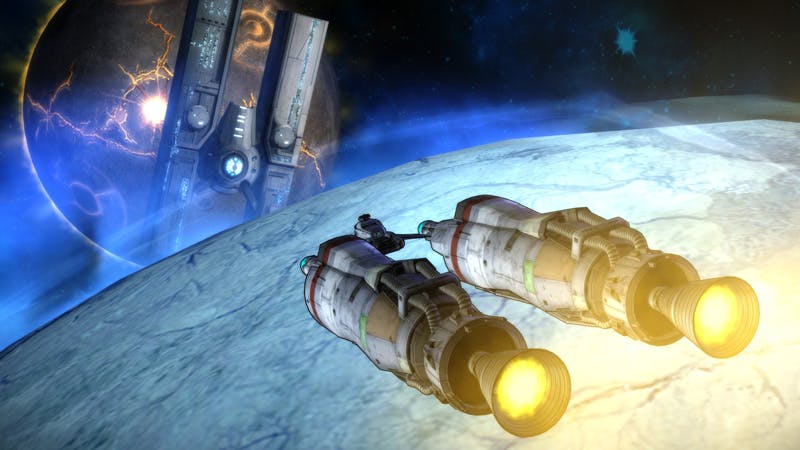 Tales from the Borderlands may also be the best-looking game Telltale has ever produced. We can lay some of this on the art aesthetics borrowed from the source material. Pandora may be a hellhole, but it’s also beautiful. The Telltale engine also complements the animation-style aesthetic of the Borderlands games, which makes it easier to replicate some of that beauty.

The Telltale engine doesn’t handle curves well, like bends in a piece of clothing. It doesn’t accommodate the subtleties of facial expressions very well, either. Tales from the Borderlands exhibits the same issues, but the similarity in style between the Borderlands source material and the graphics produced by the Telltale engine helped to cover up some of these weaknesses. 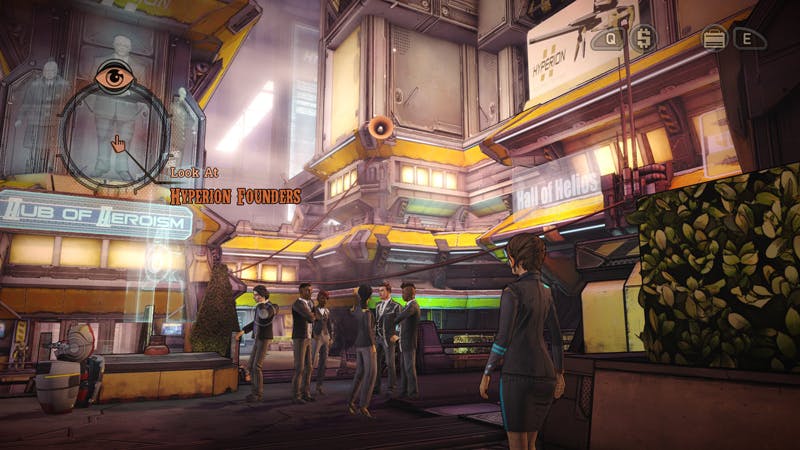 Unfortunately, the fifth and final episode of the series felt disjointed from the rest of the season, and I think this is where playing an entire season of a Telltale game at once to experience the narrative arc contiguously rather than taking months-long breaks between episodes makes a difference.

Some seriously heavy events take place on Pandora toward the beginning of Episode 5, and the player is dropped straight into the middle of the chaos with no setup as to what the hell is going on. It felt distinctly like some scenes were missing. You’re given an explanation later for the early scenes, but moving straight from Episode 4 to Episode 5 was a rough transition.

Episode 5 took enough of a divergence from the rest of the season that it felt like Telltale Games wrote itself into a corner and wasn’t sure how to wrap up the story. The latter half of the finale descends into an extended reference to Pacific Rim, Power Rangers, and fighting games that feels decidedly out of place in the larger context of the season.

If I had taken the extended break between Episodes 4 and 5, I might not have noticed how odd Episode 5 felt compared to the rest of the season. The final scenes get back on track, and the ultimate finale was satisfying. 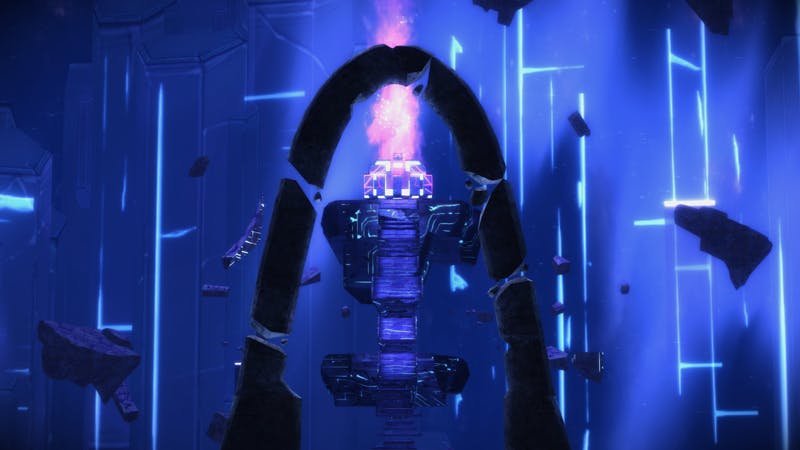 Disclosure: Our review copy of Tales from the Borderlands on Steam was provided courtesy of Telltale Games.